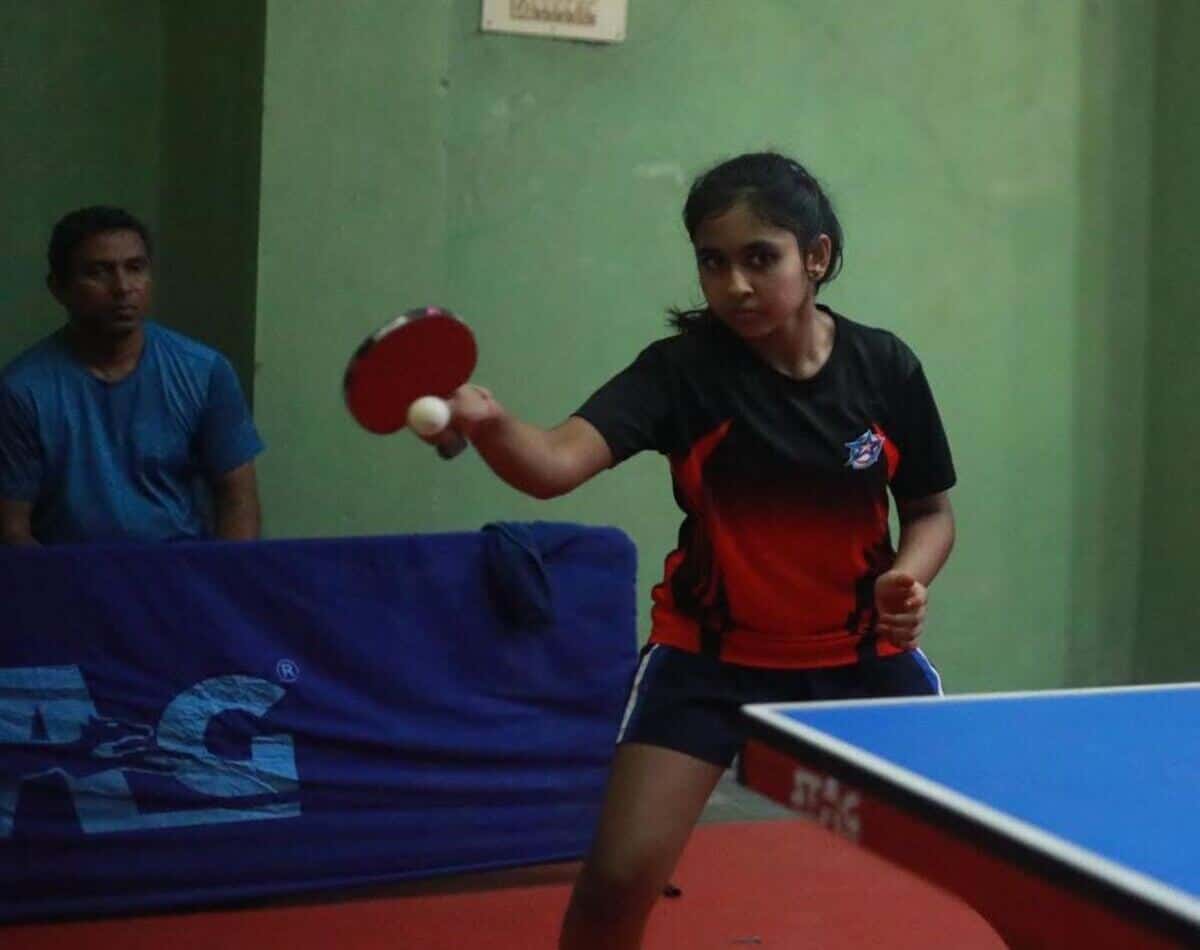 Satya Aspathi has great potential. Winning four events, i.e. under-13, under-15, under -17, and under-19 in two back-to-back tournaments is not easy.

She loves to punch above her weight. The sprightly paddler recently knocked out older rivals to clinch four titles, all in higher age groups.

Even 2022 Commonwealth Games mixed doubles gold medallist Akula Sreeja was quite impressed. “Satya has great potential. Winning four events, i.e. under-13, under-15, under -17, and under-19 in two back-to-back tournaments is not easy.

“It shows her level of consistency and determination to win every match.

I wish her good luck for all her future endeavours,” said the Birmingham battler.

In a scenario where many parents push children to compete in lower age groups, the 11-year-old took on stronger if not older opponents. At the Anandnagar Welfare Association (AWA) championship, she subdued Sri Saanvi 3-1 in the under 13 semis and P. Pragyansha 4-1 in the final.

In the St Pauls tournament that followed shortly after, it was a mix of new and past adversaries. An all-round player, Satya’s winning streak continued. In the under 13 semis, it was a facile 3-0 win against B. Sri Vidya. In the final, although stretched to 12-10 in the last game, she put down Pragyansha P 4-0.

It was an encore against Pragyansha in the under 15 semis but she conceded just one game in the final against Shrestha 4-1. With her pet stroke, the backhand topspin, Satya crushed Kavya Anand 4-0 in the under 17 semis and accounted for Nikitha 4-1 in the final.

Pitted against teammate N. Bhavitha in the under 19 semis, Satya recorded a 4-1 win and by an identical margin defeated Ikshitha to clinch the crown.

Not yet five feet tall, Satya was drawn to the game when watching her brother Arjun, an under 17 quarter-finalist in the Telangana state championship last year. In last year’s Table Tennis Federation of India (TTFI) rankings, she was placed 22 in under 13 and 33 in under 15 categories.

A class six student of Pallavi Model School, Boduppal, Satya was felicitated by her alma mater on Independence Day. Apart from Principal Tanuja’s support, the institution gave her free admission in the sports quota and relaxes attendance so that she can practice for longer hours.

Satya has no sponsors yet, and her parents bearing the costs of her campaigns. Fortunately, there’s no shortage of those backing her. Encouraging her immensely are her coach Maduri Venugopal at GSM TT Academy, Gujarati Seva Mandal (GSM) Secretary Janakbhai Brahmbatt, her teammates Nikhat Banu, Varuni Agarwal, Monica Manohar, and Telangana State Table Tennis Association Secretary Prakash Raju.

Against the growing commercialization of coaching, Venugopal sometimes appears to be fighting a losing battle. He tries hard to make coaching affordable and within reach of the common man, despite the difficulties. But parents of players and the game’s well-wishers see his love for the game is genuine. They support him in various and unexpected ways.

At times, rewards and remuneration seem to be in short supply for Venugopal, a bachelor but married to his craft. Even TTFI mandarins acknowledge his total dedication to his passion. Still, some employers exploit his enthusiasm with meager or in some cases no salary.

It’s indeed heartening to note that recognition for Venu’s mentoring does come now and then. He has been a part-time coach at Sadhu Vaswani International School, Kompally for 12 years. The institution’s Chairman, Dr. Harish M. Mirchandani, is like a father figure to Venu.

During the worst phase of Covid 19, when Venu felt death was knocking on his door, the eminent cardiologist took great care of the coach, personally examining him before starting the course of medicine.

The maker of many champions has been appointed coach of the Telangana team for the forthcoming 36th National Games in Gujarat along with Somnath Ghosh.