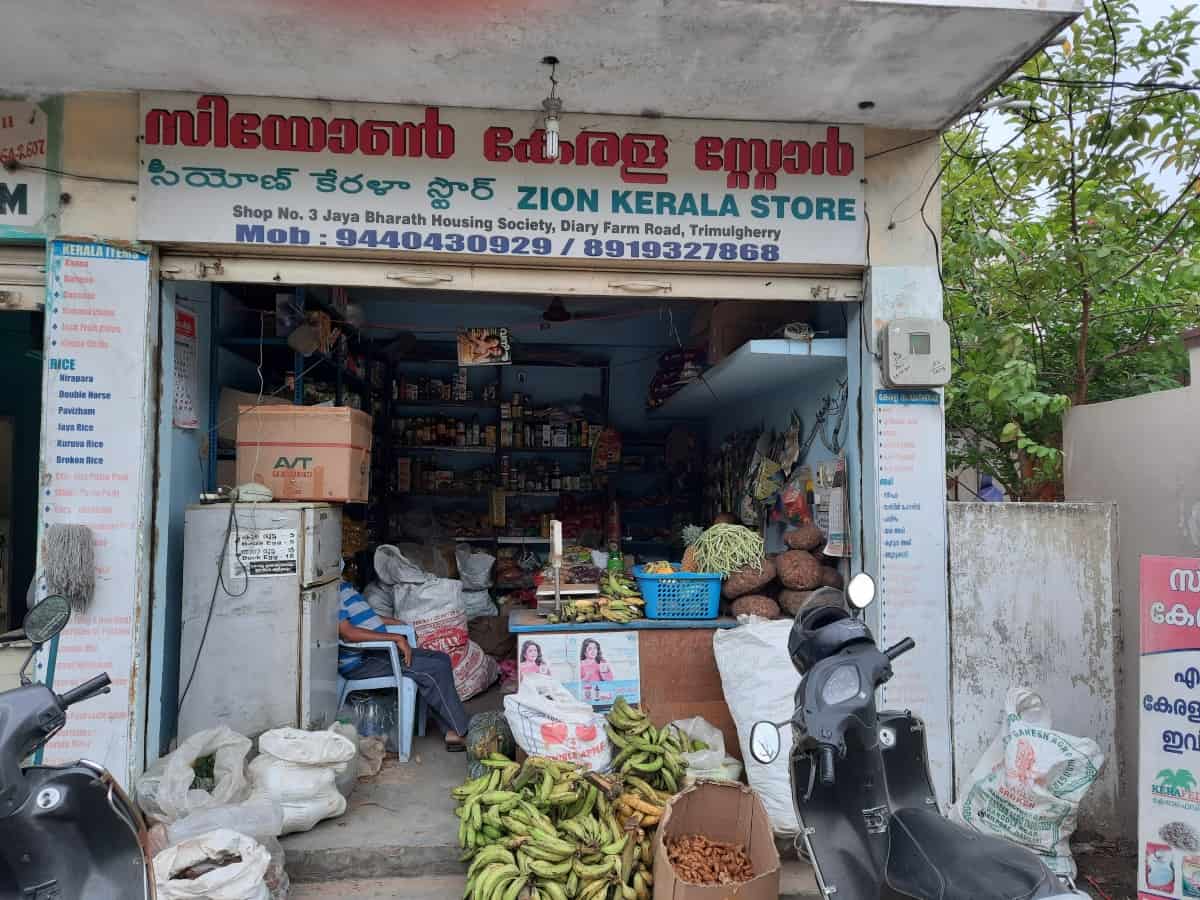 Hyderabad: If the route to anyone’s heart is through the stomach, this one-room tenement could well be the freeway to a foodie’s treasure trove. Cut off from city clutter and the usual hustle and bustle, the verdant greenery of MCEME’s Eagle Park and Vohra Institute across the road would be a soothing sight for sore eyes.

Zion may not be a shopper’s delight in that there are no spot lights or wide walking spaces. Instead there’s an awesome and more importantly affordable array of everything characteristic of Kerala. Bunches of bananas, the long and small versions, giant/wild limes (vaduga puli/curry naranga, which appear around Onam), jackfruit, jungle jack (aanjali chakka, the miniature version of the jackfruit), gargantuan yams, heavyweight coconuts, tapioca, shallots (saambaar onions), Chinese potatoes (koorka), bird’s eye chillies (kaandaari mulagu believed to fight cholestrol), colocasia (arwi in Hindi) are but a smattering of natural produce from the fertile soils washed year-round by rivers criss-crossing the little state.

Lt. Col. (Retd.) John K. John, a Keralite by origin but a homegrown Hyderabadi, was impressed on his first visit, earlier this week. “Everything is fresh here and the range of products is extensive,” noted the former National basketball player. Proprietor Rajan chettan is a good salesman too, showing us stuff we may be interested in,” said the avid biker, fresh from a road ride to Suryalanka on his Royal Enfield Bullet.

“Zion is also well-stocked with Malayalam magazines, such as the highly popular women’s weekly Vanitha, which I took home to my mum. The billing was quick too,” added the Indian Army’s former media spokesman in Kashmir.

There is never a shortage of surprises. On the table at the store’s entrance are trays of quail (small but packed with power) and duck eggs. The refrigerator on the left is full of ‘Ceylon parottas.’ The open shelves are often overloaded with a variety of chips ranging from banana to jackfruit and even tapioca with spicy and sweetened avatars to each of them. So are so many of the condiments, snacks, savouries and sweets typical of the state.

Often going hand in hand with Kalaripayattu, Kerala’s ancient martial art, are ayurveda and nature cure. Zion has a wide range of hair oils, balms, lehyams (malt/jam-like herbal/plant extract medicines) arishtams (fermented decoctions), some of them a blend of gooseberry and jaggery. Clay pots, used extensively in traditional Kerala cooking rest against the wall, as do the bundles of thorthu, ultra light weight towels that dry very quickly due to the tiny perforations dotting the cotton fabric.

Zion can be a pickle lover’s paradise, with offerings from garlic, to fish and chicken lining the shelves. Kerala is known for religious tolerance and communal harmony but even distinctly indicative brand names such as Brahmans and Namboothiris do well here, over a 1000 kms away from ‘home.’ Traditional oil mills such as Kandamkulathi, find a ready market for their KPL Shudhi virgin coconut oil, coconut milk powder or even authentic ayurvedic cough drops such as Eladi.