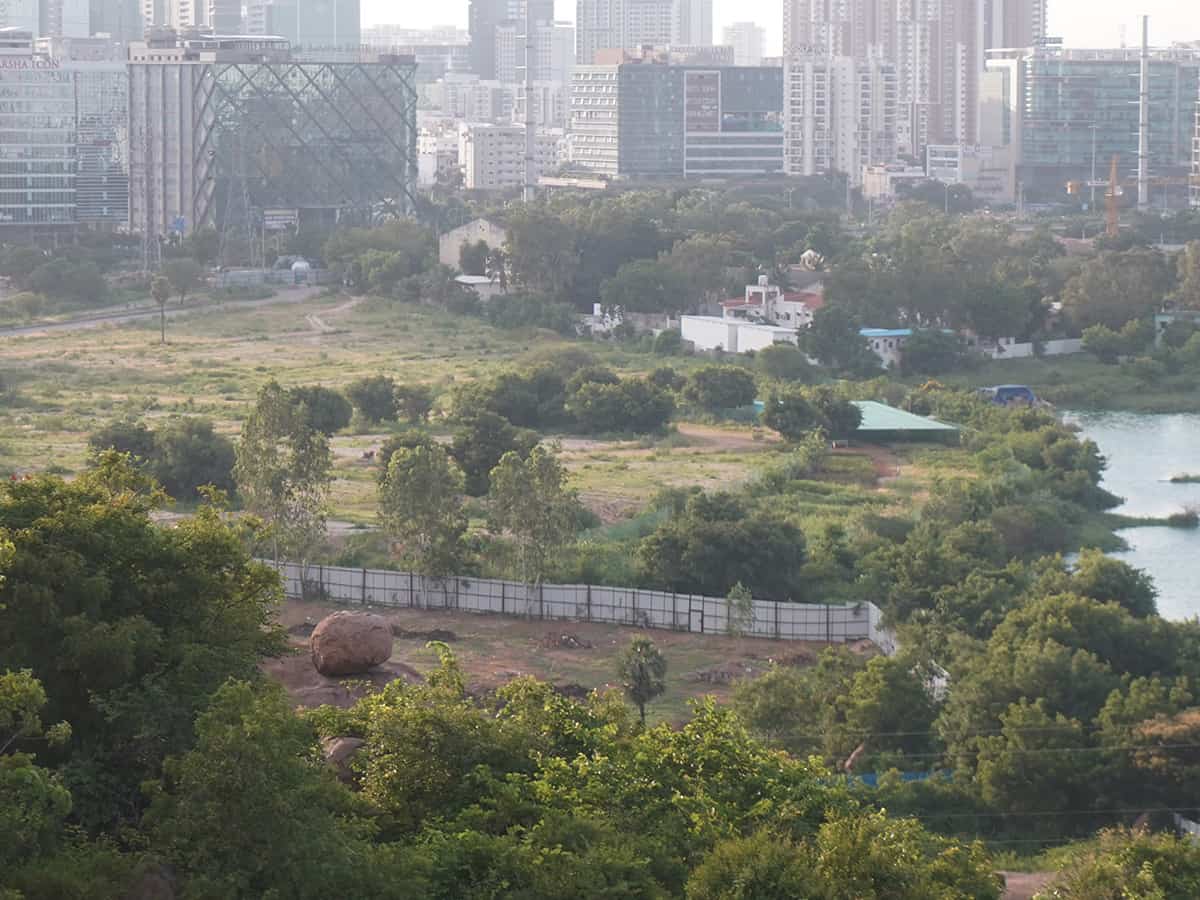 Hyderabad: Concerns of more illegal drilling at the ancient Khajaguda rocks have arisen as a patch of greenery there has been cleared illegally. Activists fear that more rocks will be destroyed soon. From months, citizens have been protesting and demanding the Telangana government to protect the site.

Activists are also trying to get the Hyderabad Municipal Development Authority (HMDA) to fence the Khajaguda rocks. The civic body, which is supposed to protect the site, had even called for tenders to conduct a survey. However, that fell through and the survey, which was supposed to have been carried out months ago, did not begin.

Given the current situation, activists worry that there may be another spate of destruction at the Khajaguda rock site. A part of the ancient rocks have already been lost due to rapid urbanisation in the areas over the last decade.

“We thought that the area where greenery is being cleared would be surveyed. The fence that has been erected there is also illegal as it was put up by private builders. They have cut down trees now, and mostly more rocks will be destroyed,” said an activist involved in saving the Khajaguda rocks.

Activists and rock climbers from Hyderabad have been up in arms against local builders for destroying ancient rocks at the Khajaguda site. Protests were held after which the issue came to prominence. Following that Telangana IT and MA&UD minister KT Rama Rao directed officials to look into the issue.

Aside from that, local builders also dumped sand at Khajaguda, altering the entire topography of the site. The Telangana High Court earlier also directed the state government to ensure that no other changes are made there. All the recent destruction at Khajaguda took place in spite of it.

Temple reconstruction also a cause for worry at Khajaguda

The temple at Khajaguda has been a bone of contention between the temple trust and activists hoping to safeguard the heritage of the rocks. Earlier in January, activists held a series of protests against the destruction of rocks. They even placed boards citing an order from the Telangana High Court, which directed the state government to ensure that the site is protected.

Activists who are fighting a legal battle to save the rocks said that there are mentions of the temple at the Khajaguda rocks going back 40 years. “The trust authorities have one old document which they furnish as proof each time someone brings up the validity of the temple. The temple is built atop a hillock which comes under a single survey number. That document states that there is a temple there. It however, offers no clarity on how much land the temple occupies,” an activist earlier told Siasat.com.

What are Khajaguda Rocks?

Fakhruddin Gutta, popularly known as Khajaguda Hills, is a protected heritage site in Hyderabad. It is immensely loved and visited by trekkers, rock climbers, walkers, and others. However, for more than a decade, the place has been witnessing drilling and destruction for the purpose of ‘development. It is now being met with resistance from activists and various citizen groups.

The site with rocks dating to several million years is located in Nanakramguda in Hyderabad. It is just a 20-minute drive from the Amazon Hyderabad campus and the Indian School of Business (ISB) in Gachibowli. Khajaguda rocks also provide a green lung space amidst the hectic, concrete-filled IT corridor.

It is also the location of the Hyderabad Climbing Championship that is gaining recognition across the country. The rock formations at Khajaguda, dating to several million years, are unique in several ways. Several caves systems in Telangana are not formed by the movement of water, but by the gradual weathering and breaking away of granite in hillocks.