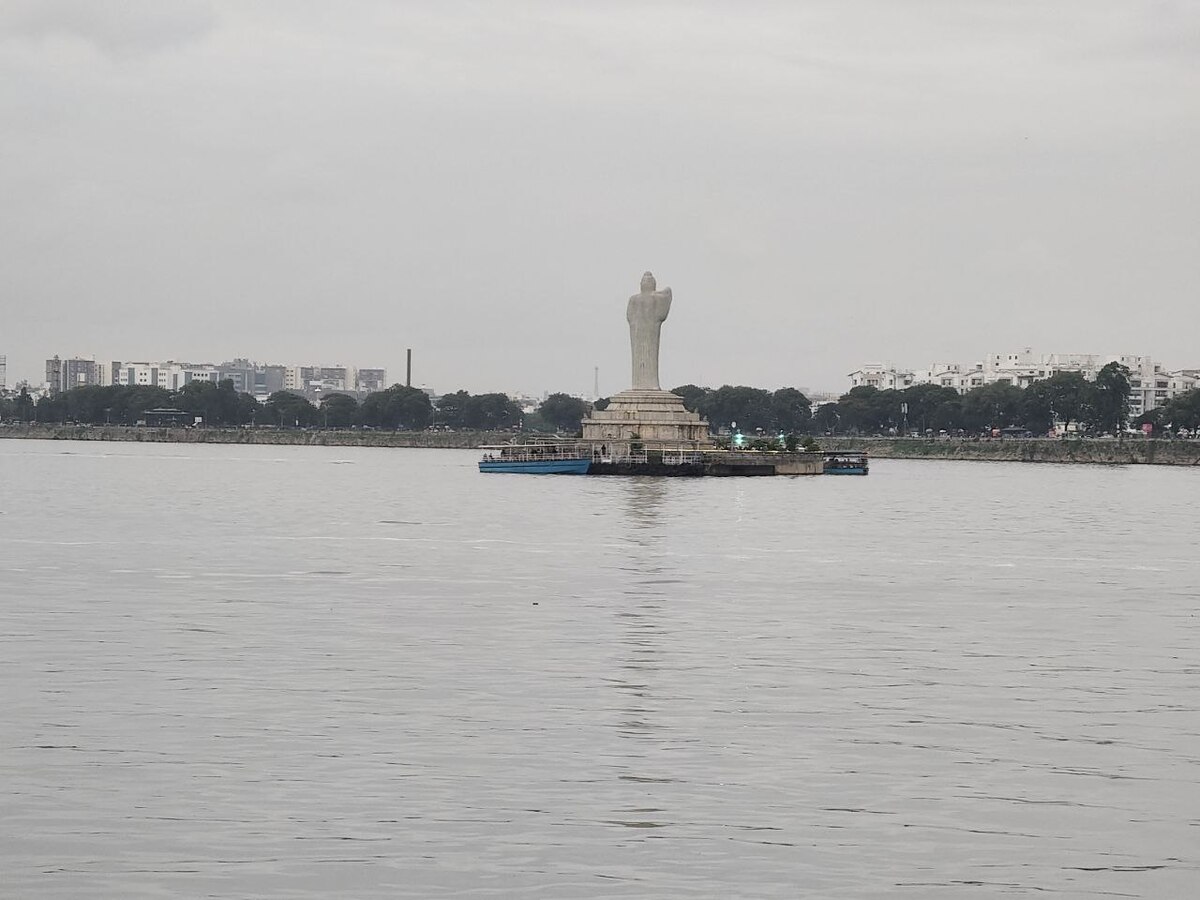 Hyderabad: Three days ago on July 12, alarm bells rang when the water levels of the Hussain Sagar touched 513.44 metres (above seal level) due to continuous and heavy rains. It was marginally over its full tank level (FTL) 513.41 metres.Residents living in its downstream areas like Domalguda and Ashok Nagar would have been affected had the rainfall continued the same way.

However, thanks to a slightly raised bund and fool-proof ancient overflow channels, the Hussain Sagar has never really flooded the city in spite of heavy rains. Any other lake would usually endanger its surrounding areas, which is a common issue during monsoons in Hyderabad and the state.

“There are proper escapes and overflow methods. One goes from Viceroy Hotel and the other goes from under the GHMC office. It goes via Amberpet and then joins the Musi River. People used to do gardening with paid water supply from the Hussain Sagar even until the 1970s,” said noted heritage activist Sajjad Shahid.

Excess water from the Hussain Sagar flows via different canals in different parts of Hyderabad to finally join the Musi river (the city was built on the river’s southern bank in 1591).

With Hyderabad receiving rains for nearly a week until July 14, the Greater Hyderabad Municipal Corporation (GHMC) was also closely monitoring the water levels in Hussain Sagar and updating the situation to the Revenue and Irrigation departments to take action. Luckily there was no danger from the Hussain Sagar.

Ancient lake may have lessons for current govt

“The full tank level is 513 metres above sea level. The depth is about 40 feet. If you look at Qutb Shahi tombs, there are overflow weirs or surplus weirs. There are three or four sluices from where water is relieved from the Hussain Sagar in Hyderabad,” said Sighatullah Khan, an architect who runs The Deccan Archive (to document the city’s history).

Earlier, much before polluting effluents were pumped into the Hussain Sagar, there were finctional canals of the lake, from which water would be released outside during heavy rains. ”There is a surplus weir near the Sailing Club and other such canals. Bagh Lingampally was built on the edge of the lake earlier. There is an old photo of DBR Mills on lower Tank Bund showing the canals,” added Sibghatullah.

Even in 2020 when Hyderabad received torrential rains which flooded the city, the Hussain Sagar had not overflowed. Other water bodies like the Balapur lake not only filled up, but also caused destructive floods. The Hussain Sagar and its sluices for water management

The Hussain Sagar was built around 1566, about 25 years before was founded in 1591. The lake was built by Hussain Shah Wali, a sufi from Gulbarga, who was invited to the city by Ibrahim Qutb Shah (1550-80), the third king of the Golconda or Qutb Shahi dynasty (1518-1687), which built Golconda fort and also Hyderabad.

Its construction was no easy feat. To feed water to the Hussain Sagar, the Musi river was diverted from the present-day Janwada area through a water channel. It was dug in 1565 and still exists to this day. It is known as the Bulkapur channel which brings water from the Kokapet Cheruvu to Hussain Sagar via Hussain Shah Wali Dargah and Hakimpet Cheruvu.

From the Hussain Sagar, water makes it way back to the Musi river from near Amberpet. The two-kilometre long bund of the Hussain Sagar was constructed in granite with sluices for irrigation and a surplus weir eventually. Hussain Shah Wali, a sufi (engineer) and son-in-law of Ibrahim Qutb Shah, was responsible for the construction, hence the name Hussain Sagar.

Ibrahim Qutb Shah then commissioned a second tank at Ibrahimpatnam which was named after himself. For centuries, the Hussain Sagar served Hyderabad its drinking water, but is now filled with toxic effluents and sewage today.

Hyderabad was founded in 1591 with the Charminar as its foundational monument. It was constructed to mark the city’s establishment by Mohammed Quli Qutb Shah, the fourth ruler of the Qutb Shahi (or Golconda) dynasty. Prior to the Charminar being built, the Golconda fort was a walled city, from where the first three kings Qutb Shahi kings had ruled.