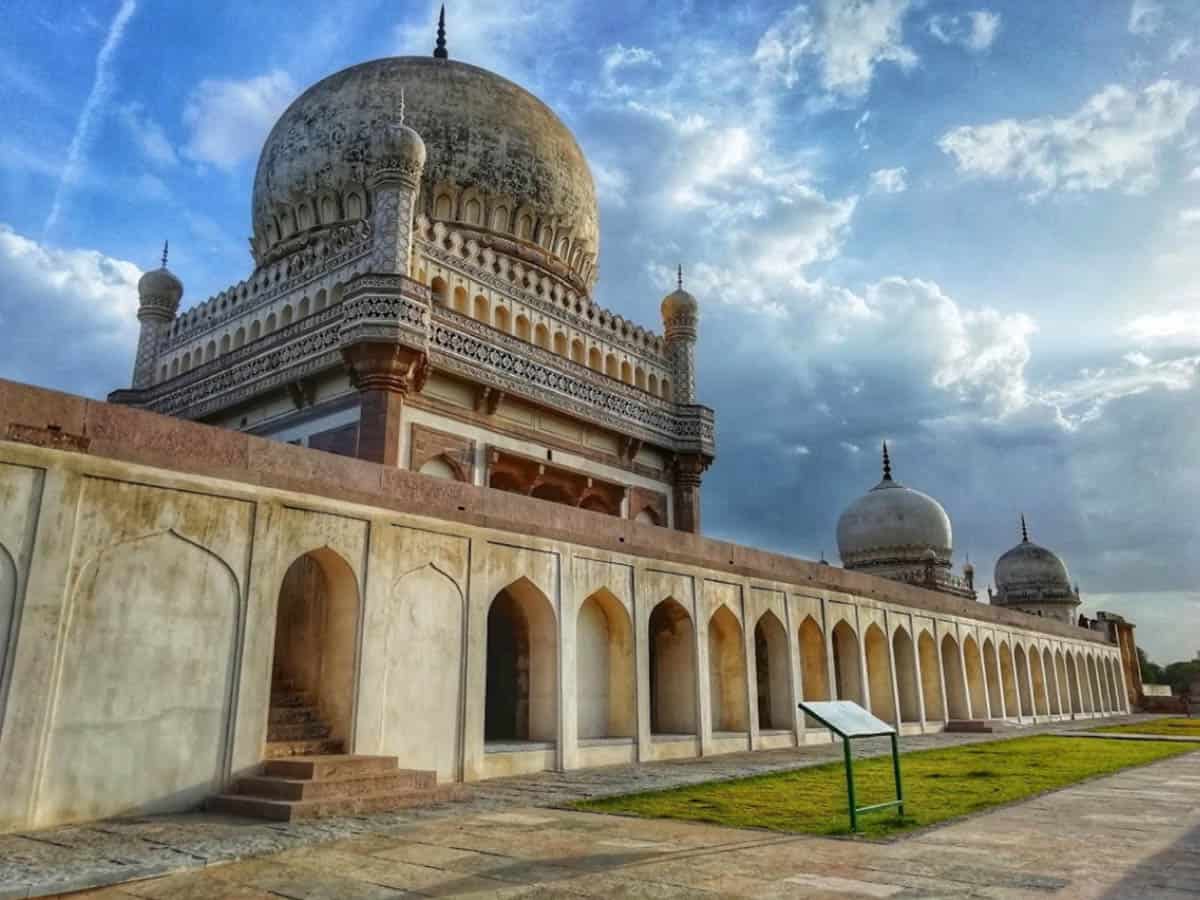 Hyderabad: The Charminar and Golconda fort are always on the list of must-see places for tourists when they visit the city. While the historical significance, physical dominance and beauty of both places are undeniable, the Qutb Shahi tombs today is in all likelihood going to overshadow both monuments once its restored fully.

Beautiful tombs, gardens, pavilions, mosques and lush green flora and fauna are all part of the Qutb Shahi tombs’ character. The tombs complex is the Golconda or Qutb Shahi dynasty’s (1518-1687) royal necropolis, and has become a favourite of many heritage enthusiasts in Hyderabad today thanks to the superb ongoing restoration that has been taken up by the Aga Khan Trust for Culture and the Telangana government’s Department of Heritage.

In fact, the restoration has been nothing less than spectacular, thanks to the AKTC, and the Qutb Shahi tombs was even part of the Deccan Sultanate monuments (in Telangana and Karnataka) that were set to be nominated as World Heritage Sites. The tombs complex was part of the list of places submitted between February 2019 and January 2020. However, the union government eventually prioritised Gujarat’s Dholavira site over it.

While there is no denying the importance of other sites, with regard to history, it may be noted that from a heritage perspective, the Qutb Shahi tombs in Telangana has the potential to singlehandedly become the sole reason for drawing tourists. It has nearly 100 structures in one huge place, which includes tombs, a Turkish bath, gardens, old trees, pavilions and in a general a very pleasing aesthetic.

What happened to the Qutb Shahi tombs’ nomination?

This year, the Rudreshwara (Ramappa) temple from Telangana bagged the UNESCO World Heritage site, which is surely something to celebrate about, as it will now put Telangana on the global map as a tourist destination. However, the question also begs to be asked: Why hasn’t the state government pushed forward other equally important monuments like the Charminar and the Qutb Shahi tombs as well?

In the past, attempts were made earlier to try and nominate the 430-year-old Charminar, Hyderabad’s foundational monument, and the Golconda fort. But nothing came off it, given that there were several issues which the government had to fix. More recently, the Qutb Shahi tombs, as part of monuments from Deccan (including those from Bijapur and Gulbarga in Karnataka) were also supposed to be nominated as UNESCO World Heritage sites.

In fact, even if one leaves aside the Charminar and the Golconda fort, both of which are riddled with local encroachments, the Qutb Shahi tombs is quite possibly one of the perfect places, among many, to be nominated as a UNESCO World Heritage site. In spite of dossiers being prepared for all three monuments, it was all cast aside, and the Kakatiya-era Ramappa temple was chosen.

The Qutb Shahi tombs would have been the perfect nomination. The huge burial site of Hyderabad’s founding royalty has nearly 100 structures, which includes tombs, mosques and other structures. It has enough space for parking, toilets and even an interpretation centre. If properly developed, the complex here can easily even perhaps overshadow the Charminar as the city’s main attraction for tourists.

Damocles sword over Interpretation Centre may do more harm

In Hyderabad, no good deed goes unpunished. And in the case of the Qutb Shahi tombs, the brilliant work on the complex by the AKTC includes a plan to include a major interpretation centre for the convenience of the general public. It was supposed to come up on where the Deccan heritage park stands today (which is part of the historic tombs), but a case by locals, with questionable intent and backgrounds, has now stymied the work.

In fact, after the state Waqf Tribunal stayed the work on the interpretation centre, the case is now pending at the Telangana High Court. A judgement is awaited on the issue. Those involved in the matter informed that the person representing the petitioners is the same person who had stayed important restoration work earlier on flimsy grounds, and without having any expert knowledge.