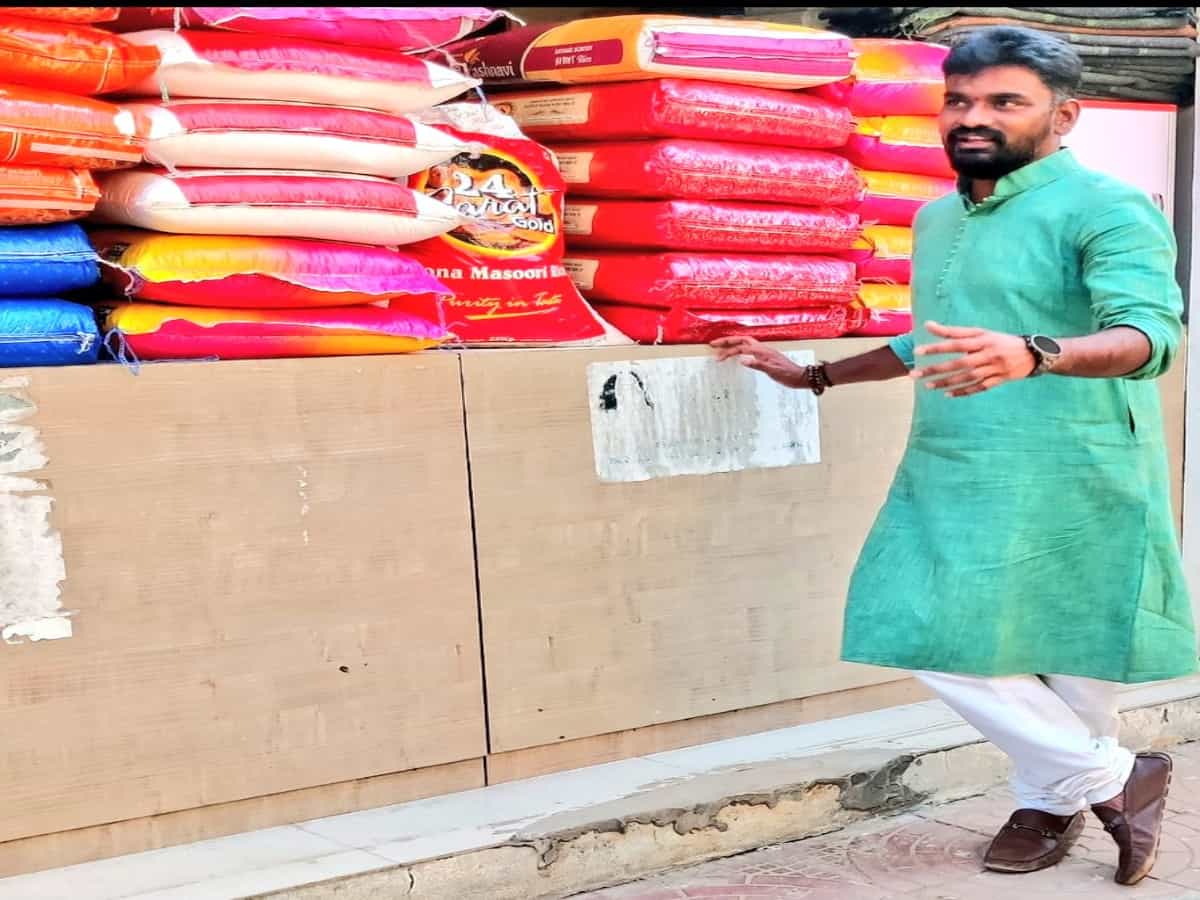 Hyderabad: A city-based English lecturer at a college, G Srinivas, was receiving no salary for the past year since the COVID-induced pandemic shut all educational institutions; and with a family of four to feed, he just had to find a way.

As a blessing came an initiative that provides him with enough rice for sustenance. He now has one less thing to worry about.

In the enervating time of COVID-19 lockdown, the year 2020 needs no introduction. Millions starved due to the precarity of employment, food and money. Migrant workers walked covering hundreds of kilometers and the unemployed barely survived. In such a distressing scenario, the real heroes Sonu Sood and the likes went out of their way to help people out.

In Hyderabad too, there is a story that needs to be told.

Rice ATM, an initiative to supply rice and other ration items for the needy round the clock, was started by 42-year-old Ramu Dosapati who is an HR executive at a private firm. And according to his estimates, Ramu spent almost 70 lakhs to benefit 45,000 people so far in over 350 days now.

Just a month into lockdown, Ramu’s son wanted to have chicken for his birthday. When he went to the nearest shop to buy, he found a security guard–Laxmamma buying 20 kgs of meat. Surprised of the quantity, Ramu inquired. “She told me that she bought it to feed migrant laborers. Her salary was 6,000 rupees a month,” Ramu told, speaking to siasat.com.

Realization struck Ramu. When a low-income woman can help the poor, why can’t he?

“I am comfortably sitting at home; my family is comfortable. No one cares about migrants, who come to work from different states and are suffering to find some food. That’s when I thought to do something for them,” Ramu recalled.

Immediately, with the help of his security guard, he made a list of 192 migrant laborers in need of ration and other items. Not only did Ramu bought those enough for atleast three weeks, he even booked their tickets back home.

Parallelly, Ramu also began Rice ATM. “Any Time Meal, Any Time Medicine and Any Time Milk — was what I thought while naming it,” Ramu said.

Besides working for migrants, Ramu also started giving family ration kits to unemployed private teachers, delivery boys, drivers and others. He also thought of single women with no job, with children to be taken care of. He turned a ‘Messiah’ to all!

But Ramu continues to live in a single-bedroom house with his wife and two sons. He always wanted and could easily afford a three-bedroom house, but he did not.

“By May 30, when all the migrant workers returned, I thought my journey has ended, but it was the beginning,” Ramu said.

One morning at 6 o’clock, his apartment guard woke him up and said that about 50-60 people had gathered outside and wanted to meet him. The word “Rice ATM” spread and people wanted help. “My wife supported me and told me to carry forward the initiative,” he said.

For this, they sold their farm in their hometown for Rs 40 lakh. Initially, he started from 1.5 lakhs from his savings account to feed them. Many came forward to help too.

In his efforts to make the unemployed stand up on their own feet, Ramu launched Project Prisha (God’s Gift as he’d like to call) and now helps economically weaker sections in setting them up tiffin centers, Pani Puri stalls, coconut selling bandis, sewing machines, iron shops and the like.

“Initially, Ramu sir helped us with ration and necessary things. Later, he arranged for fees for my child and even promised to provide mobile phones for online classes. Now he helped to start my own business,” said Lata, who lost her job at Chikkadpally girl’s hostel. She was the sole bread-winner for her family.