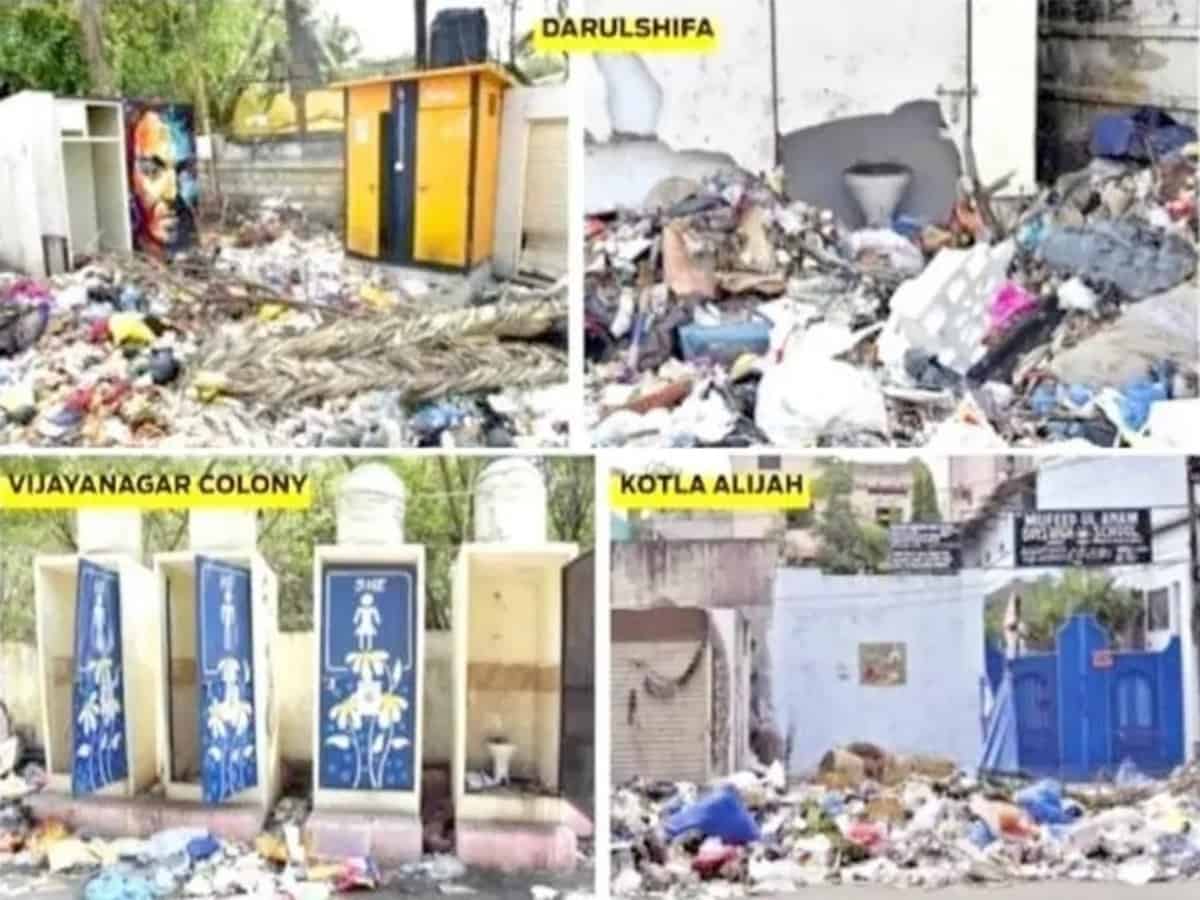 Hyderabad: The 3000 public toilets constructed by the GHMC in Hyderabad are in a bad shape.  The GHMC officials have failed to appoint any agency to maintain these toilets.

A visit to about five dozen public toilets at various areas of the city revealed how filthy and stinking these toilets are.  Most of these defunct toilet structures with its doors stolen become garbage dumping grounds.  Its interiors suffered irreparable damage.  There is no water supply or drainage connection to these toilets.

The state minister for Municipal Administration and Urban Development KT Rama Rao has severely criticized the municipal officials for spoiling city’s image.  But still no action has been taken by the GHMC.

Siddharth, a resident of Mehdipatnam, said, “Now the people must not say that Hyderabad is the best city to live in.  This 1 crore population city has not even a few hundred clean public toilets.”

Latif Khan, a fruit merchant in Gudi Malkapur, said, “There are two defunct public toilets in our colony which are dirty and the stench coming from them is unbearable.”

The doors of the public toilets are stolen in Vijay Nagar Colony and the GHMC staff has not collected the garbage dumped around them since last three weeks, said Vijay Kumar a resident of this colony.

According to Ravi Kumar, a resident of Masab Tank, the GHMC has spoiled the good name of Hyderabad city.

About the toilets at Mehdipatnam, Puranapul and Kishanbaug it is said that they are under construction while the fact is that the construction work is already over and these structures only need water and sewerage to connections to function.  Residents of these areas are wondering why the GHMC takes so much time to provide these connections and throw open these toilets for public.

According to the Central Public Health and Environmental Engineering Organization (CPHEEO) norms, there must be a public toilet at every kilometer stretch of the road.  Even though Hyderabad is figured among the best livable cities of the country but still it is lagging far behind in respect of public toilets construction.

The ratio of male-female toilets must be 1:1.  But there are hardly any public toilets for females and few which exist are in a bad shape. The women face difficulties in using these toilets due to their bad shape, unbearable stench, and non-availability of water and on top of it, all the in charge of these toilets is a male.

When the GHMC officials were contacted, they said that the maintenance agencies are not willing to operate these public toilets due to which the condition of these toilets is deteriorating.

The toilet operating agencies do not trust GHMC and fear that their dues will not be paid on time.