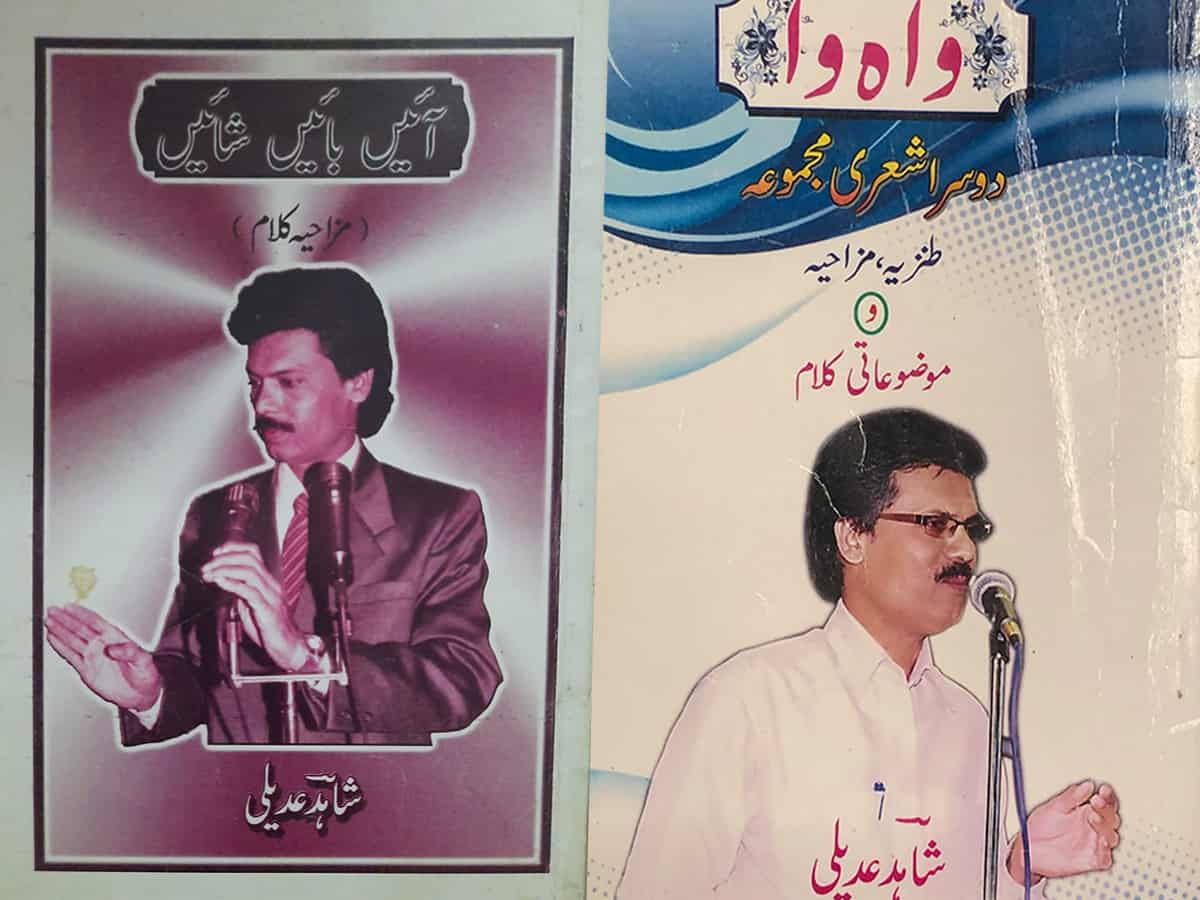 If there is any living soul that combines the dignified satire of Mirza Ghalib and the elegant delivery of Aejaz Popular Merathi of “Valima, Valima, Valima,” fame, it is mazahiya shayar (humour poet) Shahid Adeeli. Except that he isn’t as soft-spoken as the latter. His following verses are proof.

(The preacher keeps mentioning this name in his sleep

In a region (in)famous for deviating from the strictest norms of pure Urdu and producing versifiers who compose as well as recite poetry in the Deccani dialect, he is an outlier. After all, chaste language and a flawless adherence to poetic meter are in his blood.

Although born and brought up in Hyderabad city, he imbibed the finer nuances of Urdu from his poet father Nazeer Ali Adeel and mother. The latter was a half-Aurangabadi, half-Lucknowi poet as well.

“Especially in very personal settings, my Dad’s speech was devoid of any Deccani slang. When I was just five years old, he referred to me as either LaaDle or Janaab,” says the businessman and poet who was born Syed Ghani-ur-Rehman.

Besides writing and composing poetry, he and his brother, Farooq Shakeel were taught the finer nuances of prosody by their accomplished father.

It wouldn’t be long before he would recite the following lines to his brother Shakeel.

(At least teach your son some manners
So that he becomes human, if not, he’ll settle for politics)

His brother then would say, ‘Oh Lord. Clearly the poetry bug has bitten you.” After further encouragement from Shakeel, he then recited the same lines to his father. Adeel smiled and then uttered this couplet in praise of his own son.

Ghani-ur-Rehman then adopted the pen-name Shahid Adeeli — Shahid being his nickname at home and Adeeli being a derivative of his Dad’s last name.

However, he would first prove his mettle at Bazm-e-Tanz-o-Mizaah’s first All-India mushaira in 1983 at the famed Ravindra Bharati Auditorium and has been a mainstay at mazahiya and naateeya mushairas (poetic gatherings where poems in praise of Prophet Mohammed are recited) in Hyderabad, all over India, and the Gulf.

Adeeli does enjoy the Deccani greats like Ali Sahib Miyan, Sarwar Danda, Sulaiman Khateeb, and Gilli Nalgondvi. However, with respect to his style and linguistic refinement his favourite poets are mostly from North India.

‘I like Sagar Khayami, Akbar Allahabadi, Zareef Lakhnavi, and Dilawar Figar. Their content and style of reciting exudes elegance. They never corrupted the language. Hence, in those aspects they are my role models alongside my father,” says Adeeli in his signature exquisite manner.

After all, his poetic lineage of teachers and students has links to the Dabistans (broad categories that adhere to a poetic style exclusive to a city)of Delhi, Lucknow, and Hyderabad. From the Delhi side, their line includes Mohammed Ibrahim Zauq, Daagh Delhvi, and then eventually Kaifi Hyderabadi. Kaifi then taught Safi Aurangabadi, who received tutelage from Shehzada Ziauddin. Ziauddin’s pedigree of teachers goes back to Mushafi Ghluam Hamdani.

Safi then found one his best students in Nazeer Ali Adeel.

Although Adeeli veers more towards humourous rather than serious content, his father’s influence is very apparent.

The former’s similar verses below are quite the tribute with a pinch of satire.

Though he himself speaks Deccani in personal, non-literary settings, he surely steers clear of certain slang prevalent in Hyderabadi’s humour poetry scene. “There are some poets, both up North and here who try to make people laugh through vulgarity or by frequently injecting words like ‘haule,’ ‘nakko,’ and ‘re.’ Such diction and ‘crass’ topics indicate an inability to create substantive content,” exclaims the prosody master.

Be it watching him live or reading his published collections Waah Waah or Aaiee Baaain Shaaein, one gets a masterclass in the use of various literary elements such as similes, metaphors, aphorisms, and allusions. Adeeli isn’t afraid to use them to satirize the fraternity he is a part of.

“Unfortunately, it doesn’t look like my progeny will be taking to poetry and prosody,” states Adeeli. Despite the prospect of his rich lineage not being inherited by his subsequent generation, he proudly recites the following maqta of his ghazal with grace.