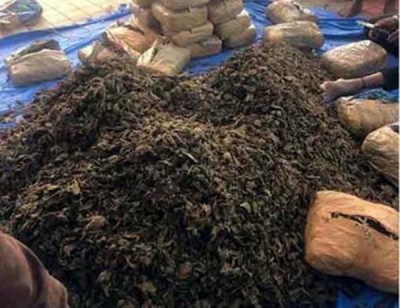 The seized ganja in 335 packets was meant to be sold in various parts of Pune and Osmanabad districts in Maharashtra.

The NCB said that these packets were recovered from three vehicles -Bolero pickup trucks that camouflage like vegetable transporting vehicles, while from boot space of Swift Dzire and Honda city car.

According to a statement released by the NCB here, the arrested are identified as S. Pawar, V. Pawar, B. Ware, M. Dhotre, D. Deshmukh, R. Gunjal, A. Gandhi and S. Sanap.

The NCB added that they acted on tip off and seized such a huge quantity of banned substance from Pedda Amberpet Toll Plaza in Rangareddy district in Telangana.

“The consignment was concealed in compressed form and kept in a brick like 335 packets and wrapped with brown colour adhesive tapes,” the NCB explained.

“Ganja from this region finds its way to all over the country including major cities like Delhi, Mumbai and various states like Maharashtra, Rajasthan, Tamil Nadu, Kerala, West Bengal and even it is smuggled through the ocean to Sri Lanka as well,” the note explained.

The note added that difficult terrain and inaccessibility makes these areas difficult for law enforcement agencies to destroy illegal cultivation of ganja.

The NCB Hyderabad sub-division has registered a case and is investigating.