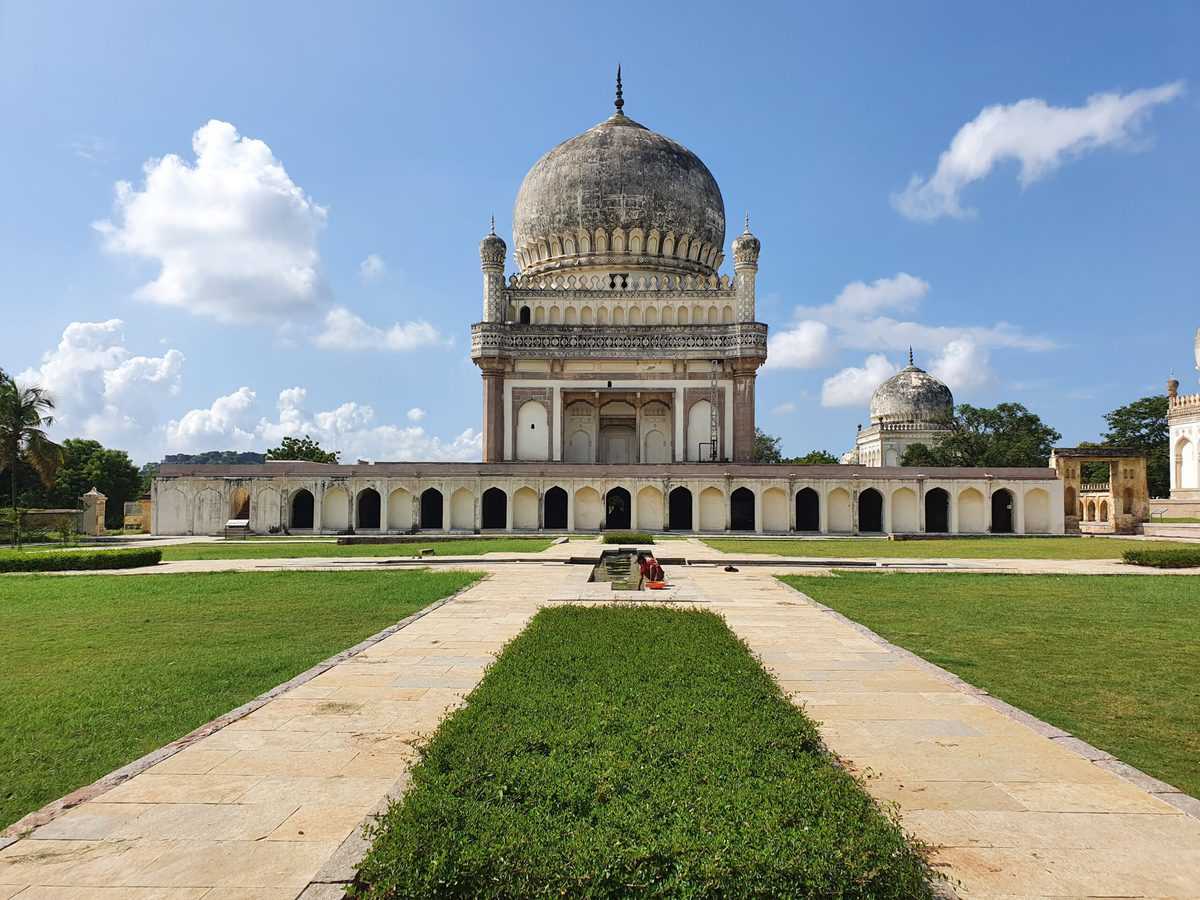 Hyderabad: No good deed goes unpunished. This seems to be the case with the Qutb Shahi tombs in the city, which is currently facing a range of issues that have created major hurdles for its restoration. The most peculiar, perhaps even odd, is with its upcoming interpretation centre. Work on its construction was supposed to begin earlier, but a case by petitioners with questionable intent and backgrounds have put the entire project in peril.

The Qutb Shahi tombs is the royal necropolis of the Qutb Shahi or Golconda dynasty (1518-1687), which once ruled from the Golconda fort, and later founded Hyderabad in 1591. The tombs complex comprises nearly 100 structures, including tombs, gardens, pavilions and mosques. The site is currently being restored by the Aga Khan Trust for Culture (AKTC) in association with the Telangana Department of Heritage.

The work on the tombs by the AKTC has been remarkable to say the least. The organisation, which also restored Humayun’s tomb (among many others) in Delhi, also saved the Badi Baoli (stepwell) in the Qutb Shahi tombs complex from collapse half a decade ago after a portion of the stepwell fell due to heavy rains. Today it has been fully restored. Not just that, other monuments like the tombs of Sultan Quli (founder of Golconda dynasty) and his grandson Mohd. Quli Qutb Shah (city’s founder) have been restored to their full glory.

The whole point of an interpretation centre is to help visitors and tourists understand the history of the Golconda dynasty, and through the Qutb Shahi tombs complex itself. The centre, which was suppose to come up on where the Deccan Heritage Park now stands, would rightly let visitors enter the tombs in its actual order.

As of now, when one visits the tombs complex, the first structure to be seen is the tomb of Sultan Abdullah Qutb Shah, the sixth Golconda king, who was the last one to be buried there (the last king Abul Hassan was taken captive by the Mughals after they captured Hyderabad in 1687). In fact, even the Archaeological Survey of India’s (ASI) national policy also advices interpretation centres at all major historical sites.

The issue – who are the petitioners?

As of now, work on the interpretation centre has been stopped since nine months on the basis of a questionable petition from seven persons, who are being represented by a lawyer named Mohd. Ilyas. The case is currently pending at the Telangana High Court, after the state or opposite parties appealed against the Waqf Tribunal’s order staying the work. Justice MS Ramachandra Rao is believed to be hearing the case.

One of the petitioners is also one Jaferuddin, who had tried to bury a dead body in the Qutb Shahi tombs premises in 2016. That was in complete violation of the laws. That incident in itself was enough to throw light on the fact that Jaferuddin was in fact trying to encroach on the heritage site. His mother was forcibly buried in the site, in complete contravention of laws, after which an assurance was taken that no more burials would happen.

A source in the know of things also claimed that Jaferuddin is in fact an employee of the lawyer or a close associate, inferring that the latter is in fact running the show.

The petitioner Jaferuddin and Ilyas are the same duo who have been filing cases from some years to stop various works at the Qutb Shahi tombs. With regard to the interpretation centre, AKTC officials and others said that there is completely false information that has ben provided to the courts. It is a surprise that even the Telangana High court has not taken cognizance of the work at the Qutb Shahi tombs, given that Chief Justice Himo Kohli has been actively pulling up the state government for not taking care of its heritage structures.

According to the petitioners, who have questioned the AKTC’s expertise, the current work on the interpretation centre allegedly damaged graves and will change nature of the Waqf site, among many other complaints. However, the allegation that the work on the interpretation centre by the AKTC is laughable to say the least, given that the AKTC has in fact saved many of the monuments inside the Qutb Shahi tombs from collapse and destruction.

In fact, the AKTC, led by expert architect Ratish Nanda, won the UNESCO Asia/Pacific award for Excellence in 2020. It has also restored the Bagh-e-Babur (Afghanistan), Humayun’s tomb in Delhi and most recently the coveted Sunder Nursery in the national capital, for which it has won laurels. The AKTC has a whole panel of experts who have international experience. And what expertise do the petitioners have to put up objections?

It is in this background that the whole petition on the interpretation centre by the petitioners is highly questionable. On contacting one of them, he denied even being a petitioner, and asked to speak to the lawyer, who could not be reached. An official, who did not want to be quoted, said that the petitioners are daily-wage workers, or run small businesses, who have absolutely no idea about the site’s history.

“They are clearly seeking money out of a Rs. 100 crore project, and are filing false cases to stop works and arm twist us. But they are not going to get anything,” the official added. It is in this background that one has to wonder how such important works, which will help the Qutb Shahi tombs and Hyderabad boost its heritage conservation, have been stopped on flimsy grounds by persons with absolutely no expert knowledge.

It is in fact even more disconcerting to see how the Waqf Tribunal has been misled, given the fact that the AKTC uses about 2000 archival images from the 1800s to aid its restoration of the Qutb Shahi tombs. It may be noted that the work has been so thorough that not even a single structure inside the complex was damaged last year during heavy rainfall in October.

One can only hope that the Telangana High Court takes all facts into considerations, and expert opinions before finally giving its judgement. Heritage activists said that they were hopeful of the interpretation centre being built.

“This person has been after the work on the tombs from many years. He basically wants money. I have been told that the petitioners have asked for money to take back the case, which of course nobody agreed to. We hope the Telangana High Court, which saved Irrum Manzil, at least appoints a panel of experts without the likes of Ilyas on it. At least a panel of IAS officers and experts in conservation can be appointed,” said a heritage activist from the city, who did not want to be quoted.

Sultan Quli, founded the kingdom with Golconda fort as its capital in 1518, following the death of last sovereign Bahamani (1347-1518) emperor Mahmud Shah Bahamani, under whom the former had worked as the governor of Telangana.

Sultan Quli, who was originally from Hamadan, and two of his sons (among others) who went on to become the second and third kings, developed the fort into into a walled-city between 1518 and 1580. Hyderabad was built in 1591 by Mohd Quli Qutb Shah, the founder’s grandson, after he decided to move out of the walled-city.

The fort has 87 bastions, and eight gates, of which a few are not accessible to the general public as they are under army control. It is believed to be one of the Deccan’s most impregnable forts, and had kept Mughal emperor Aurangzeb’s army at bay for eight months when he laid siege to Hyderabad in 1687. The Charminar, built in 1591, is Hyderabad’s foundational monument.