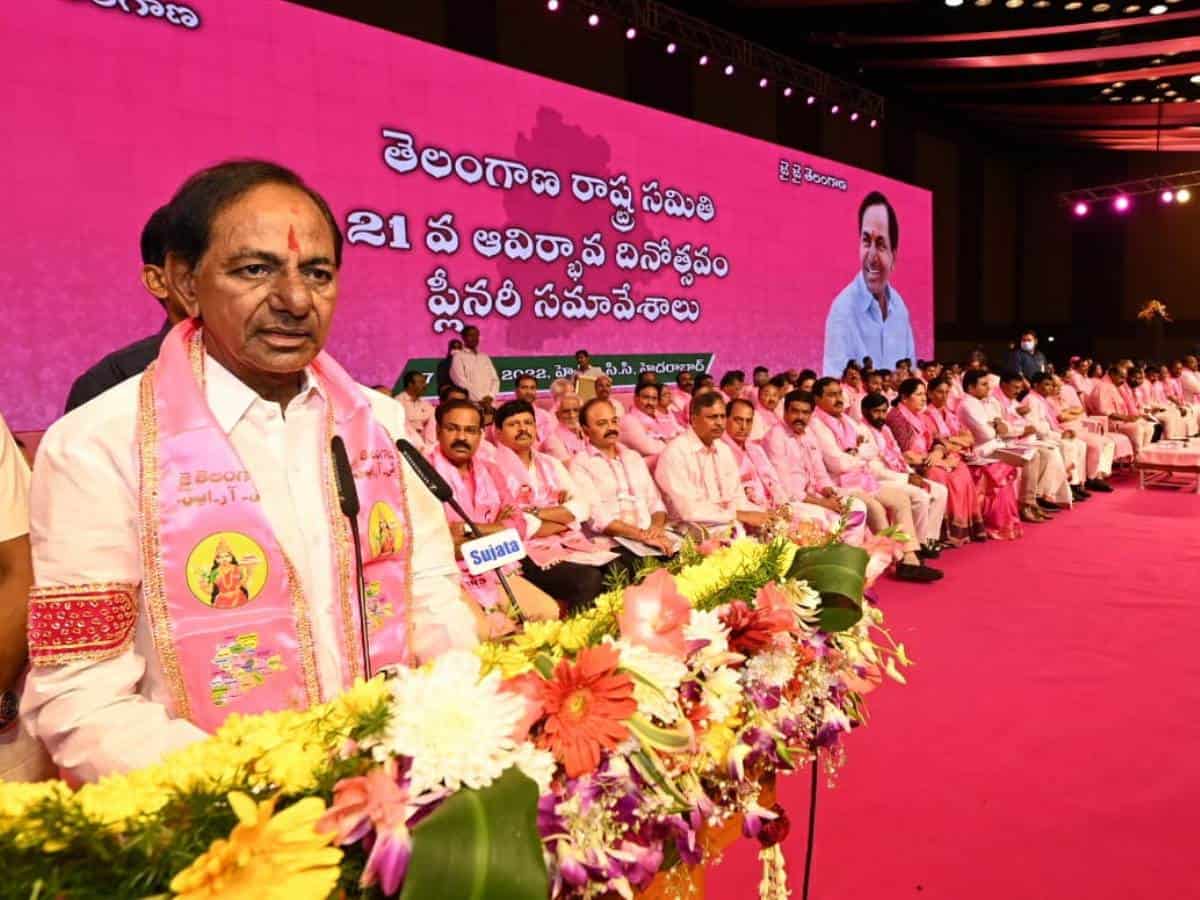 Hyderabad: After failing to make any progress on his idea of a national front, Telangana Chief Minister K. Chandrasekhar Rao appears to have made up his mind to float a national party.

A final decision in this regard is expected to be taken on June 19 at the extended meeting of Telangana Rashtra Samithi (TRS) executive.

The TRS chief, who had a marathon discussion with state ministers and senior party leaders on Friday, is understood to have agreed to the proposal of floating Bharat Rashtra Samithi (BRS).

The process to register the new party with the Election Commission of India is likely to start soon. KCR, as the TRS supremo is popularly known, is looking to make a formal announcement of a new party in New Delhi by June-end.

TRS leadership is reportedly keen to have the TRS symbol of ‘car’ for the BRS as well. The TRS office coming up in the national capital will serve as the headquarters of the proposed national party, party sources said.

KCR, who has already announced his intention to play a key role in national politics, discussed the current political situation with his close aides for more than six hours. He is said to have accepted the proposal by a party MLA to name the proposed party as BRS.

After his meetings with Delhi Chief Minister Arvid Kejriwal, Samajwadi Party chief Akhilesh Yadav and former Prime Minister and Janata Dal(S) leader Deve Gowda last month, KCR had said that there would be a sensation soon in the country.

Political observers say KCR apparently decided to float a national party after failing to make progress in bringing anti-BJP and anti-Congress forces on a common platform to provide a national alternative.

Though he held a series of meetings with leaders of various political parties including Shiv Sena, DMK, RJD, SP and JD (S) during last few months, no consensus could be reached on forging a front as an alternative to both the BJP and Congress.

It is also significant to note that the much-awaited meeting between KCR and West Bengal Chief Minister and Trinamool Congress Chief Mamata Banerjee did not take place and despite the attempts made in the past KCR could not have Odisha Chief Minister Naveen Patnaik and Andhra Pradesh Chief Minister Y. S. Jagan Mohan Reddy on board as both the BJD and YSRCP continue to extend support to Narendra Modi government on key Bills.

Another indication that KCR has given up his plans to forge a front came during TRS plenary in April.

At the day-long plenary of TRS held to mark 21st foundation day of the party, he had hinted at floating a national party.

As he did not speak at the plenary about his meetings with leaders of various political parties and chief ministers of some states, this gave credence to the buzz that the TRS chief was toying with the idea of forming a national party.

KCR told the plenary that some legislators suggested that TRS should be changed into BRS. The leaders who spoke at the plenary appealed to KCR to play an active role in the national politics saying the country needs a visionary leader like him.

In one of the resolutions passed at the plenary, TRS said that it will play a key role in national politics in the coming days. The party observed it needs to play a constructive role and fill the political void at national level.

Responding to the requests made by the party leaders, KCR said he was ready to play an active role to the best of his ability. The plenary saw delegates repeatedly raising slogans of ‘Desh ka neta KCR’.

The TRS chief repeatedly remarked that the country should come out of the routine political system of fronts. “Four parties or four leaders coming together to remove somebody from the post of the Prime Minister and install another person in his place is not the solution,” he had said.

He pointed out that the country has seen many fronts in the past that did not yield desired results. He also narrated an incident in which some Communist leaders came to him and expressed the desire to bring together various parties and he told them that if this was aimed at only removing somebody from power he would not be part of it.

“We have seen many fronts. We need a front which works for the people. We need an alternative agenda, a new integrated agricultural policy, a new economic policy and new industrial policy,” he said.

Through the proposed national party, KCR is likely to present before the nation the successful model of Telangana. Highlighting the tremendous progress made by the state in a short span of eight year, the TRS leader is likely to push for a nation-wide debate on why the country with its immense natural and human resources can’t replicate the success of Telangana.

“We can dream and we can also make those dreams come true. Telangana has shown this,” said KCR, who believes that the people’s aspirations remained unfulfilled even after 75 years of independence.

KCR had earlier called for developing ‘Bangaru Bharat’ (golden Bharat), saying the country has the potential to become more prosperous than the US.