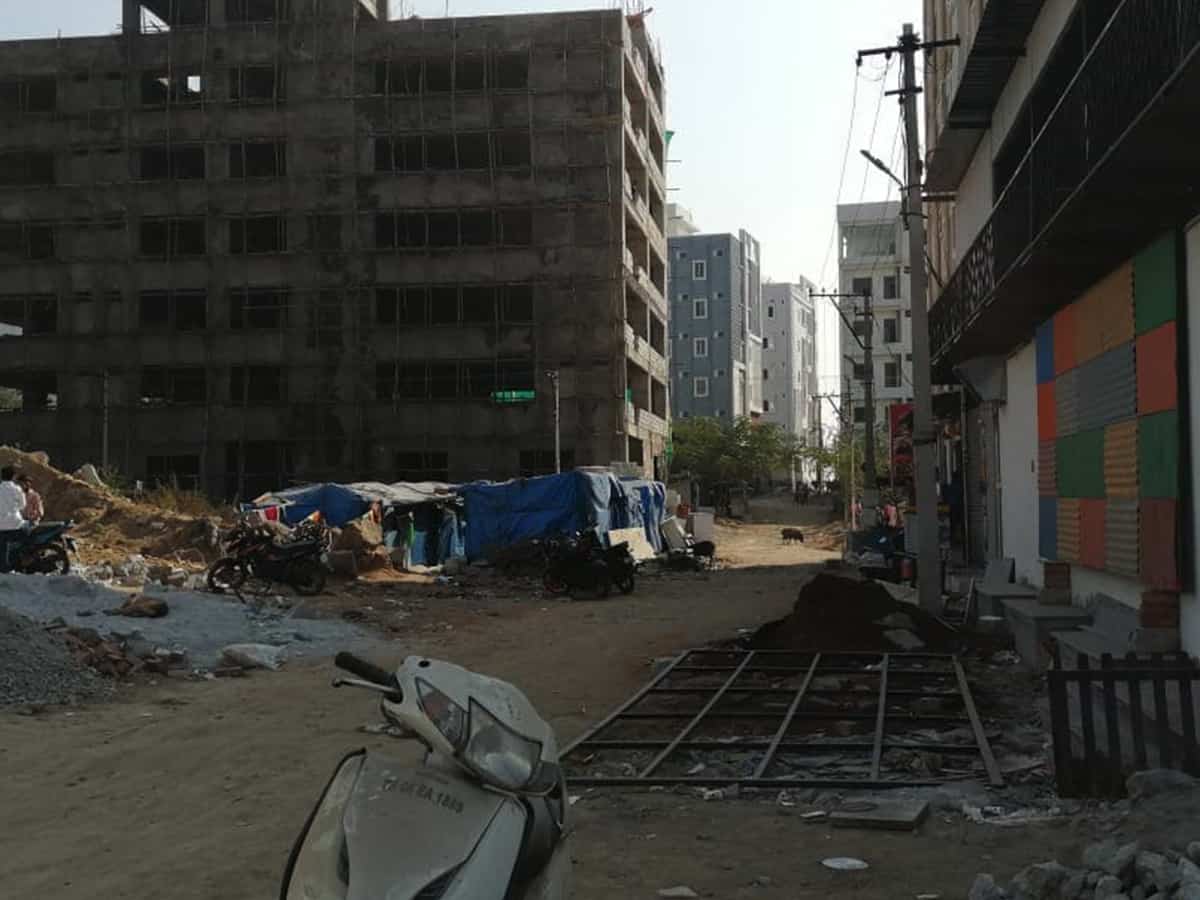 Hyderabad: With the increasing value of the real estate in Hyderabad’s IT corridor, several land sharks are taking over the Tumkur Lake in Gowlidoddi, locals allege. These land grabbers have constructed buildings in the lake, which remains in close proximity to Nanakramguda financial district.

The encroachment is in clear violation to Government Order (GO) 111, which prohibits any construction activity within 10km from lakes’ Full Tank Level (FTL). The order was issued in 1996, which “prohibits industries, major hotels, residential colonies or other establishments that generate pollution in the catchment of Osman Sagar and Himayat Sagar, up to 10 km from the full tank level (FTL) of the lakes.”

According to the local opposition leader of Gowlidoddi, nearly three acres of the 10-acre Tumkur Lake has encroached by land sharks. He alleged that construction and demolition debris has been continuously dumped into Full Tank Level (FTL) boundaries and buffer zones of the Tumkur Lake to build multi-storeyed buildings inside the lake.

Another local alleged that around 15 to 20 new buildings are being constructed, the building owners procured fake documents about six months ago and the construction of two of them have already begun.

The locals also claimed that these buildings are a major source of pollution, as it is being constructed on the banks of the lake affecting the inflow channel of the lake.

“A complaint was lodged at Narsingi Municipal Corporation, but no action was taken up by the authorities,” said Manohar Reddy, who had filed the complaint.

“Several complaints were lodged with the authorities but still, the land eaters are continuously dumping the demolition waste into the lake and have constructed multi-story building on the banks of the lake running the beauty of the natural resource,” said Madhulika, a lake protection activist.

Tumkur Lake was a major water resource for the entire Narsingi, but the lake is slowly shrinking now. The lake receives inflow from Osman Sagar also knows as the Gandipet Lake.

Built-in 1920 after the Musi floods of 1908, the Osmansagar reservoir provided drinking water to Hyderabad in the early 20th century. The Himayat Sagar was also constructed later, in 1927, for the same purpose.

The Government Order (GO) 111 The GO-111 followed the precautionary principle in order to protect the reservoirs mainly the drinking water requirement of Hyderabad. The saddest part of the GO-111 is despite the protection of these lakes by the Government, the rapid urbanization and selfish attitude of people have resulted in encroachment of FTL areas and the catchment area of these lakes, damaging the precious water sources.

When several areas got flooded in October with heavy rains, activists groups and citizen associations blamed land sharks as they encroached most of the lakes in the city.