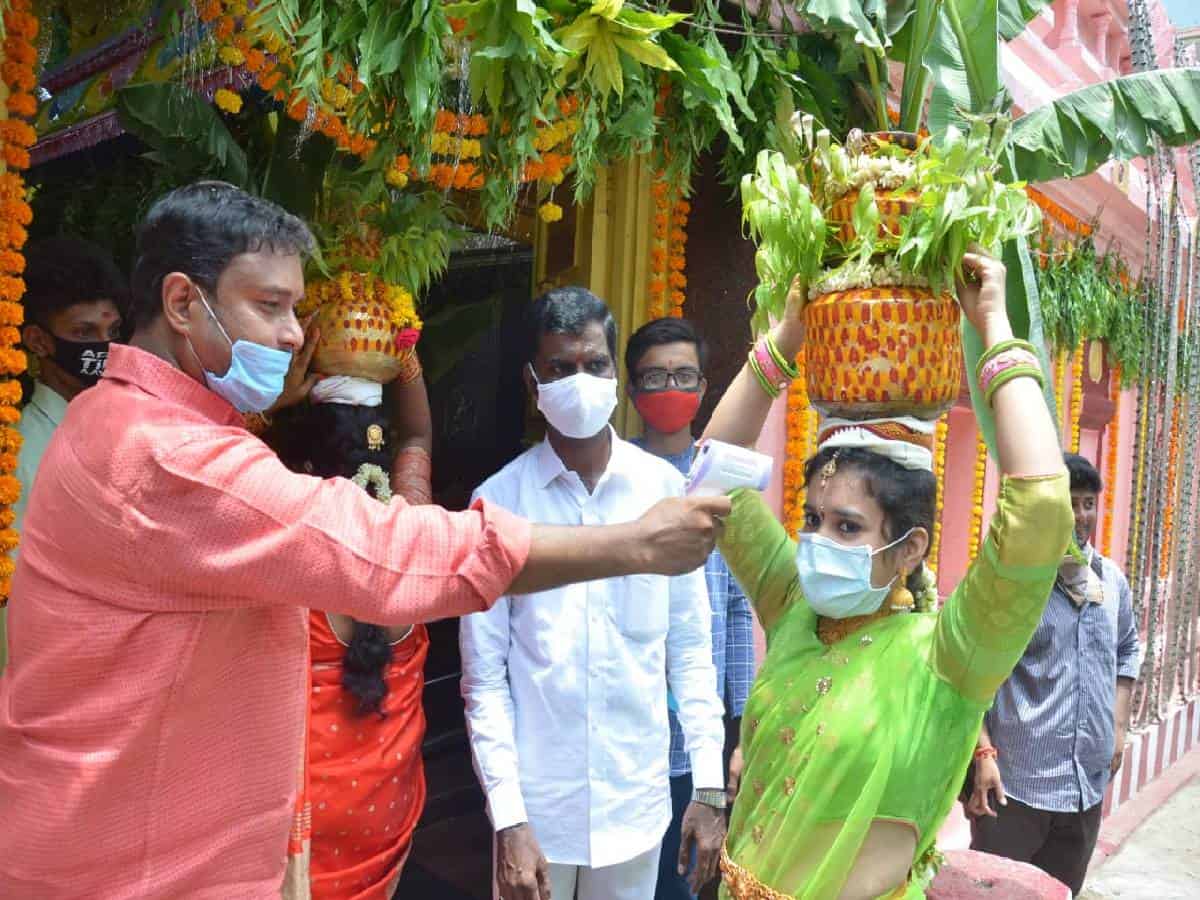 Hyderabad: Which symbolises the unique culture of Telangana, began Friday amid fanfare at Ujjaini Mahankali temple in Secunderabad.

The two ministers along with Home Minister Mehmood Ali, Mayor Gadwal Vijayalaxmi and other officials inaugurated the temple arch to formally mark the beginning of the annual celebrations.

GHMC ties up with Lighthouse Communities foundation for skill development

Srinivas Yadav along with his family members offered first ‘Bonam’ or offering to the deity. Large number of women with pots on their heads, ‘Potharajus’ and other devotees participated in the event.

The main celebration of Secunderabad Bonalu will be held on Sunday when thousands of devotees offer special prayers at the historic temple.

The festival will conclude on Monday with famous ‘Rangam’ where predictions about the state’s future will be made by an unmarried woman, followed by the Ghatam procession. This will be followed by a procession of a caparisoned elephant carrying a portrait of the deity. Smeared with turmeric and vermilion, potharajus dance to rhythmic drum beats in the procession that will pass through various areas.

Bonalu in Secunderabad, or Lashkar Bonalu as it is called, is the second phase of the nearly month-long traditional festival in twin cities of Hyderabad and Secunderabad.

The festival began on June 29 at the Jagadambika Temple on Golconda Fort.

It is commonly believed that the festival was first celebrated over 150 years ago following a major cholera outbreak. People believed that the epidemic was due to the anger of Mahankali and began offering Bonalu to placate her.

Meanwhile, Hyderabad Police Commissioner C. V. Anand on Friday offered prayers at Lal Darwaza temple in the old city. He noted after a gap of two years due to Covid-19, all the festivals are witnessing participation by a large number of people.

The Commissioner hoped that people will continue to extend all cooperation in smooth and peaceful conduct of the celebrations. He said 1,000 police personnel would be on duty as part of the arrangements for the Bonalu in the old city.

Ashada Bonalu is a festival held in the month of Ashada, according to the Hindu calendar, celebrating goddess Mahankali. Devotees, especially women make offerings in the form of food to goddess Mahankali in specially decorated pots.

During the festival, people also hold ‘rangam’ or forecasting the future, organise processions and cultural events.

After the formation of Telangana in 2014, the Telangana Rashtra Samithi (TRS) had declared Bonalu as the state festival. The festivities reflect Telangana culture with performances by the artistes. This year, the government has allocated Rs 15 crore for the celebrations. The money was spent to spruce up the temples for the celebrations and for making all necessary arrangements for the devotees.