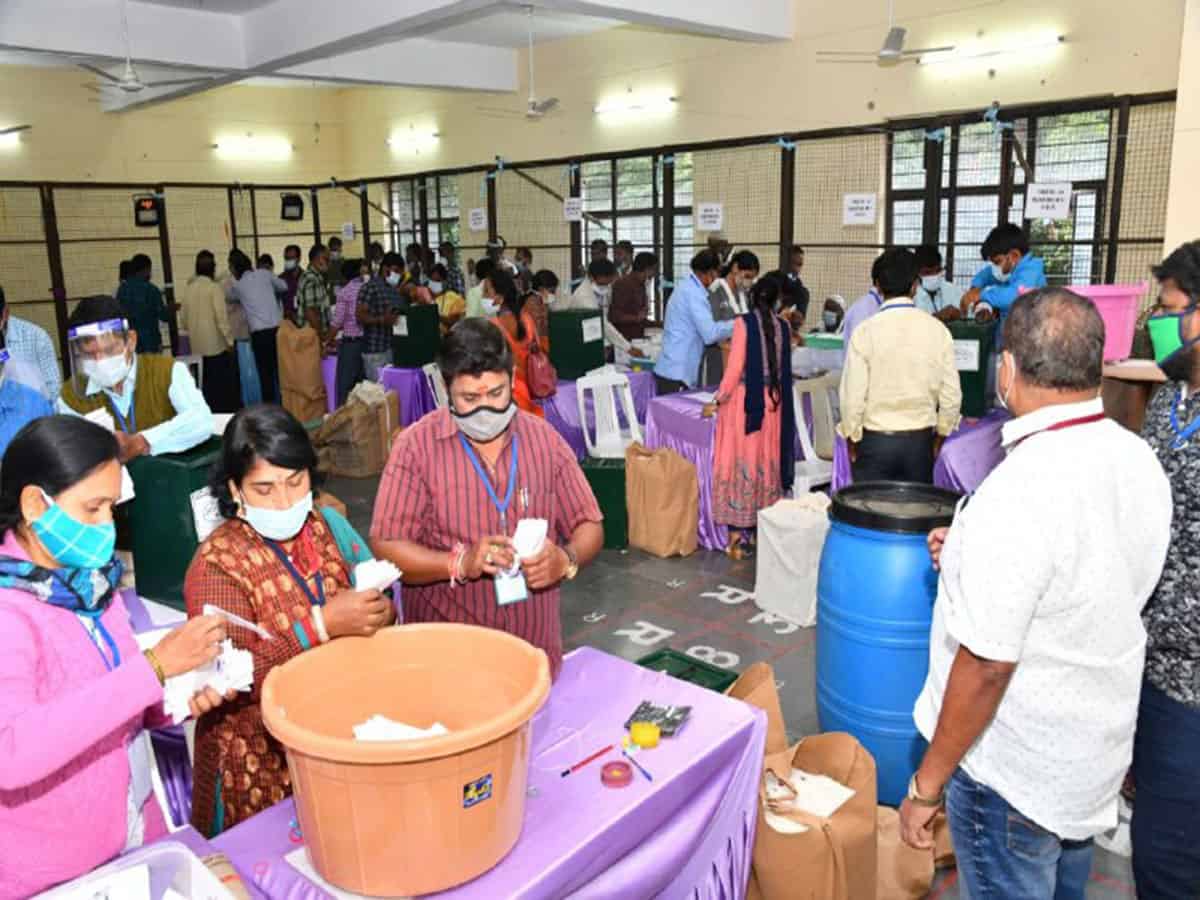 Counting of the votes cast in all 150 divisions began at 8 a.m. at 30 places in the city with the Telangana State Election Commission deploying over 8,000 personnel.

12:04 pm: TRS leading in 15 seats whereas, BJP and MIM in 6 and 2 seats respectively as counting of ballot votes begins.

11:10 am: Telangana BJP MP D Arvind said, “the transformation has started in the state of Telangana. You have seen Lok Sabha election results then Dubbaka by-election & now GHMC. Let us wait till the evening, but it is clear message to TRS that people want change”.

10:56 am: Police Commissioners of Hyderabad, Cyberabad and Rachakonda appealed to political parties not to take out any victory rally till the completion of 48 hours after election results.

10:30 am: The BJP established early leads in 69 divisions as postal ballots were taken up for counting before opening the ballot boxes. The ruling Telangana Rashtra Samithi (TRS) was ahead in 31 divisions and Majlis-e-Ittehadul Muslimeen (MIM) in 10 divisions.

It may be mentioned that it is an early trends as only counting of postal ballots commenced.

Since paper ballots were used in the elections, the results are likely be known only late in the evening.

Postal ballots were first taken up for counting. The authorities have arranged 150 counting halls with 14 tables in each hall.

Police have made elaborate security arrangements in the city in view of the counting.

Prohibitory orders and traffic restrictions were imposed around counting centres.

Hyderabad, Cyberabad and Rachakonda police have imposed a ban on victory rallies for the next 48 hours.

Polling in one division was stopped due to discrepancy in ballot paper and re-poll was held on Thursday.

The day will decide the political fortunes of 1,122 candidates.

The bitterly contested elections saw a high-decibel campaign with the participation of several central ministers and top national leaders of the BJP.

Congress, Majlis-e-Ittehadul Muslimeen (MIM) and Telugu Desam Party (TDP) were among the other major contesting parties.

The promise by BJP leaders to change the name of Hyderabad to Bhagyanagar if the party voted to power also sparked a row.

In the 2016 elections, TRS had captured GHMC with landslide majority of 99 in 150-member body.

The MIM was second largest party with 44 seats, while the BJP was a distant with only four seats.

Almost all the exit polls predicted that TRS will cross the magic figure of 76. However, it is also predicted that the ruling party’s seat share will reduce when compared to the results of the last GHMC elections.

People’s Pulse predicted that the TRS is likely to get 68-78 seats in the 150-seat GHMC whereas, MIM candidates will emerge victories on 38-42 seats.

Pulse Today projected landslide victory for the TRS. According to it, the TRS will get 86-90 seats whereas MIM will get 34-38 seats.