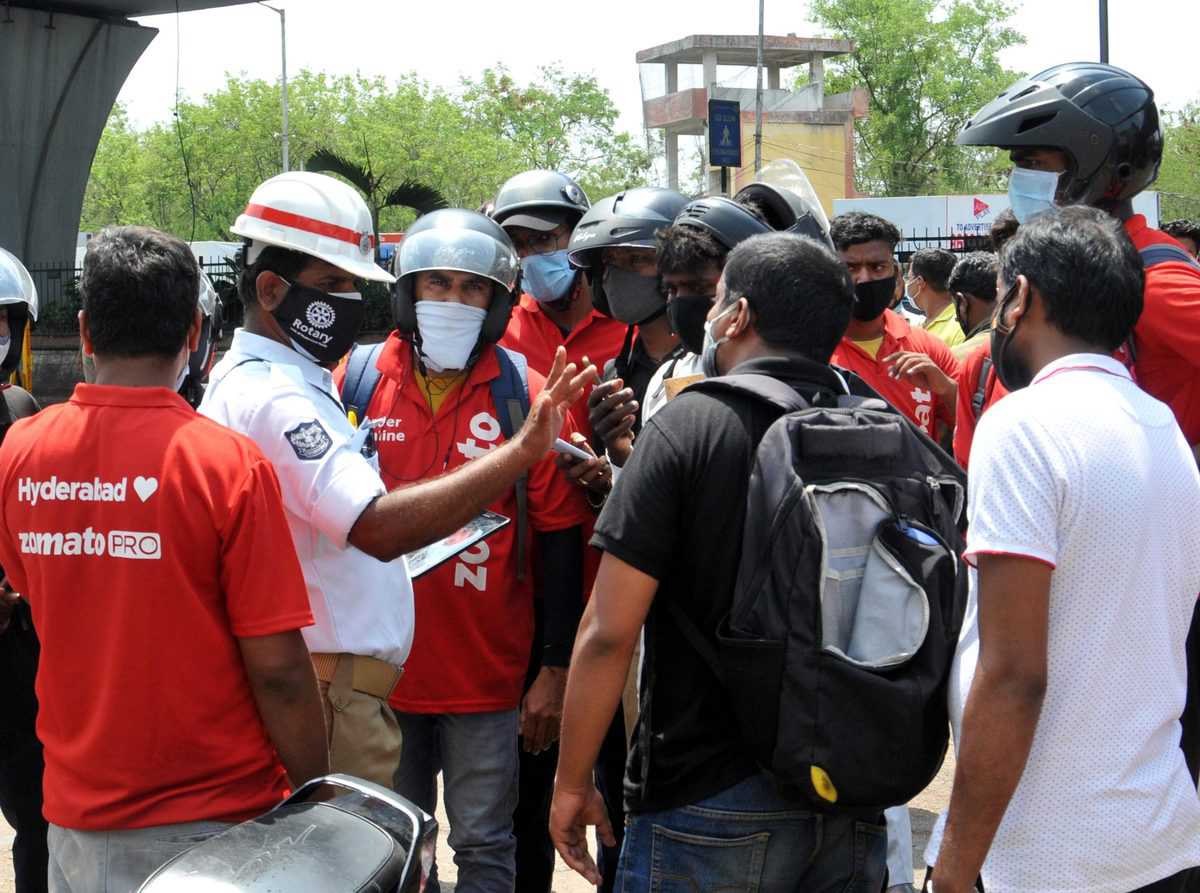 Hyderabad: A day after the the city police’s unnecessary crackdown on food delivery boys, Telangana home minister Mahmood Ali and state director general of police M. Mahender Reddy late on Saturday night said that they held meetings with top police officials due to the disruption of essential services. A day earlier, the city police tightened its checkings during the lockdown and fined several violators.

However, the police, perhaps in its overzealousness, forgot that food and e-commerce delivery personnel were in fact exempt from the restrictions. “Held a review meeting with 3 commissioners of police, regd, the several requests flagged with ‘Disruption of essential services including food deliveries etc,[email protected],while tightening of LockDownToday’. Directed to ensure a seamless supply ahead,while executing #StrictLockdown,” tweeted DGP Mahender Reddy, late on Saturday night.

Thousands of Hyderabadis on Saturday suddenly realised that orders for food would not be delivered, as police officials rounded up delivery boys and even began fining them. More than a few videos were posted on sites like Twitter, where cops were clearly misbehaving, beating and not listening to the delivery personnel who were trying to reason with them.

Apart from citizens airing their anger against the police, well-known RTI activist Saket Gokhale also expressed his displeasure at what was happening. “Hi @mahmoodalitrs & @TelanganaCMO: Has @hydcitypolice been given special permission to assault & beat up innocent delivery partners of food delivery apps? Wanted to check if action will be taken against these cops lest the National Human Rights Commission needs to step in,” he wrote.

Apart from the home minister and DGP, many people also flagged the issue to state IT minister KT Rama Rao, who is also the son of chief minister K. Chandrahsekhar Rao (KCR). “Many thanks for your kind words Discussed with Home Minister @mahmoodalitrs Garu & @TelanganaDGP Garu on today’s incidents. They will issue a statement shortly,” he tweeted after someone flagged the issue to him.

It is to be seen if the city police will once again be extremely harsh on Sunday as well. What happened a day earlier was reminiscent of last year’s COVID-19 lockdown, wherein police books lakhs of cases against violators, and beat up people, videos of which came up on the internet from time-to-time.

In response to the police action, a spokesperson from food delivery company Swiggy said, “While the government’s recent directive allows Swiggy to operate as an essential service not just for our food deliveries but also Genie and other services, we have paused our operations due to the on-ground challenges today. We’re prioritising the safety of delivery partners while we await clarity on this matter.”