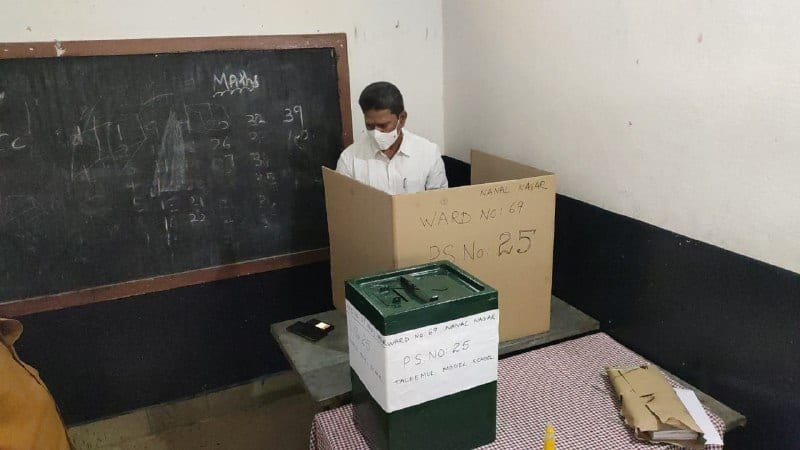 Hyderabad: What was expected to be a noisy and fierce election turned out to be a damp squib, as the greater Hyderabad Municipal Corporation (GHMC) elections came to an end on a very lacklustre note, with less than half the city’s population turning out to vote even until 5 p.m.

Barring a few stray incidents of errors, reported fraud, and even violence, the polling was more or less peaceful across the GHMC area on Tuesday.

While the Bharatiya Janata Party (BJP) was expected to give a tough fight to the ruling Telangana Rashtra Samithi (TRS), a low turn out for polling usually indicates a safe passage for the incumbent government.

The BJP, which ran a communal campaign and even roped in national-level leaders like union home minister Amit Shah and Uttar Pradesh chief minister Yogi Adityanath, is expected to make some gains this time.

However, a low voter turn-out may hamper its chances to some extent.
On Tuesday, the city witnessed 34% of voting till 4 p.m., which went in complete contrast to what the State Election Commission (SEC) had predicted (SEC). The election body in fact was expecting polling to be slightly higher than the previous election’s 45%, but it turned out that voters were uninterested in voting.

In fact, the Langer Houz division did not even see any voting between 4 p.m. to 5 p.m., and its poll percentage till evening was just 6.67%. While the Patancheru ward had a high turnout, others like Rajendranagar, Goshamahal, Madhapur, Saroornagar, Adikmet etc witnessed polling percentages between 20% to 30% till 5 p.m.

Earlier in the day, Majilis Bachao Tehreek (MBT) leader Amjadullah Khan reported a few dozen women who were suspiciously moving around at a polling station at Azampura. Apart from that, re-polling will be done on December 3 at all the 69 polling stations of the Malakpet ward where the Communist Party of India’s (CPI) symbol was not displayed correctly in the ballot papers.

The results for the GHMC elections will be out on December 4.

In the 2016 polls, the TRS swept the election by winning 99 out of the 150 wards, while the All India Majilis-e-Ittehadul Muslimeen (AIMIM) won 44, leaving the BJP, Congress, and TDP with the remaining wards.