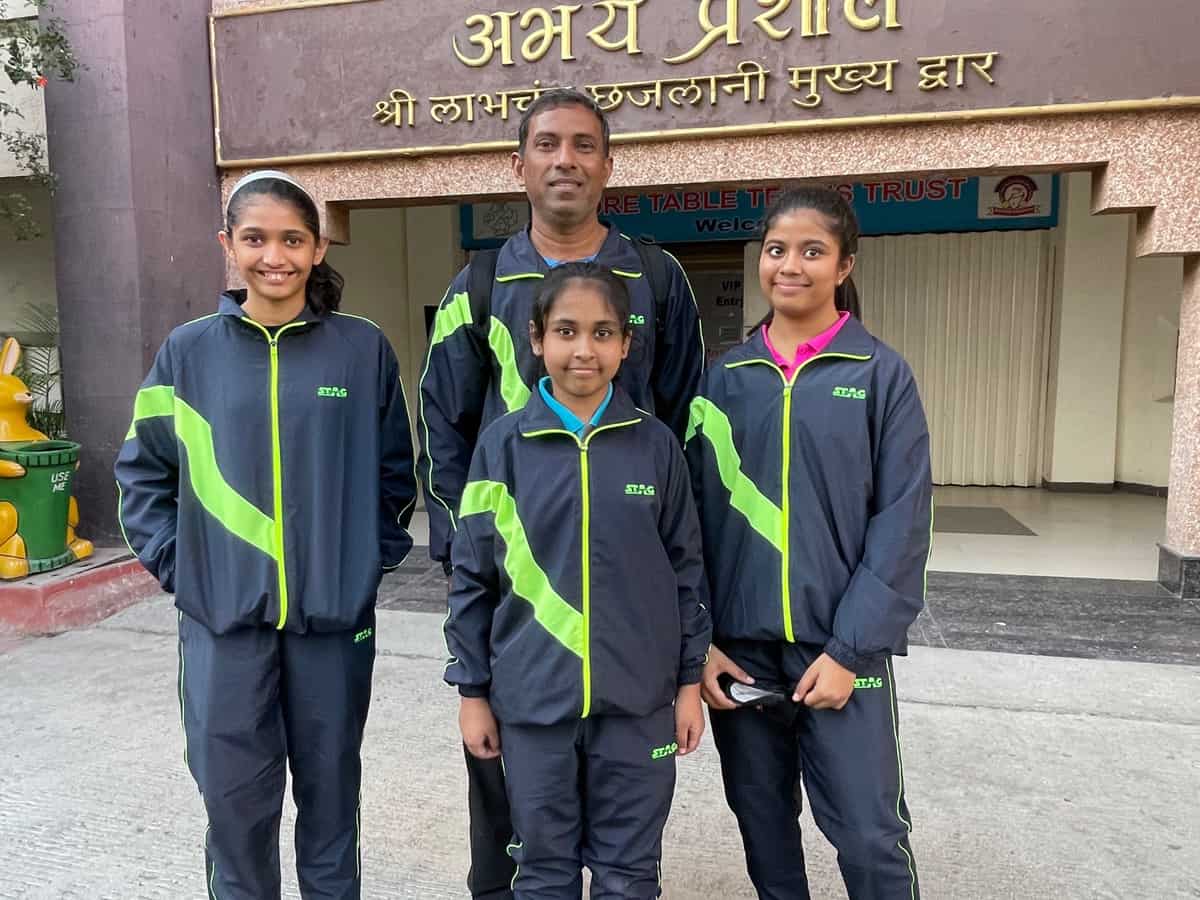 Hyderabad: Coaching in any sport is not cheap. Higher the quality, so will the fees be. In addition to kit, equipment and diet expenses that parents groan under, the added costs of coaching weigh many of them down. Some programmes thrive with the blessings of the sports establishment, the powers-that-be, while others have the knack to connect with the rich, misled into believing higher costs mean higher quality.

Mercifully, there are some coaches and schemes that are affordable and within the reach of the common man. One such institution imparting training of high and consistent quality down the years is the Gujarati Seva Mandal Table Tennis Academy (GSMTTA) beside the Arya Samaj Mandir on R.P. Road in Secunderabad.

Teaching beginners is the toughest form of coaching. Children are easily distracted, often not interested, are there because parents push them into sports to free their hands. Worse still, they nurse outlandish ambitions for their kids.

Three dedicated mentors have made the twin cities of Hyderabad and Secunderabad proud by their wonderful ways with children. Each of them would go down to the wavelength of their wards, encourage them to express themselves best with their skills and even offer them incentives when the tiny tots perked up their performances.

The names of Bana Ravinder in basketball, late Mir Mahaboob Ali in badminton and Maduri Venugopal in table tennis spring to mind quite simply for the yeoman services they have rendered to their respective sports. Each of them has produced international and national players by the handful, primarily because they sustained the interest of their trainees, ensured they bloomed and fulfilled their potential.

The tragedy of this trio is that it has not received its due share of reward or recognition. Despite their selfless contributions to building careers of children propped up by sporting achievements, two of them languish but survive mostly through their sweat and toil. Sadly Mahaboob Ali, who taught the biggest names in badminton right from holding the racquet correctly, passed away much poorer after retirement from the Accountant General’s Office.

Of the aforementioned trio, Venugopal was the last entrant to this select club. He first joined the YMCA at Secunderabad in 1991 and learnt the game by watching others play. Little did he realise that in the years to come, his powers of observation would bring him laurels through the winning ways he inculcated in children. This trait was noticed early by his guru Telukunta Nagaraj, who encouraged Venu to spur the youngsters to obtain better results.

The mutual respect between pedagogue and pupil has held good for nearly three decades. If a tree is known by its fruit, Venugopal has produced champions with assembly line regularity. Bhaavitha Nagulapalli and Varuni Jaiswal figured prominently in Telangana youth team’s bronze medal winning endeavour in the 2019 senior Nationals at Jammu. While Varuni’s exploits are well known, Bhaavitha first emerged on the scene by becoming state No. 1 in juniors and No. 2 among women.

Palak Ghia became state sub junior No. 1. Another promising prospect is Ananya Donekal, state sub juniors runner-up, who was at WTT Youth Contender tournaments at Otocec, Slovenia and at Varazdin, Croatia, from September 4 to 10, 2021. Satya Aspathi, state no. 3 in the cadets (under 12 years) category also took part in the 2019 sub junior Nationals at the Abhay Prashal indoor stadium in Indore, M.P..

In the same year would emerge Venugopal’s star pupil, Nikhat Banu. The 10-year-old clinched the crown not just in her age group but also among older girls in the sub-junior section as well. In the following year, she became the cadet National champion, ending AP’s drought of triumphs at the country-wide level 36 years after Mir Khasim Ali. On one occasion, it was a clean sweep by Venu’s students when Nikhat clinchéd the state women’s, youth and junior girls titles, while Akshi Sancheti bagged the cadet and sub-junior girls crowns.

Although always a modest and soft-spoken man, the achievements of Venu’s wards spoke most eloquently for his selfless service. Officials at the district, state and national levels began to take note of his most productive work, free of fanfare and commerce. From 2005 onwards he was entrusted with the care of Andhra Pradesh’s squads for the sub-junior, junior and senior Nationals. His students made him proud, ensuring they never returned empty-handed whenever he accompanied them as coach.

The Table Tennis Federation of India (TTFI) appointed him coach for the 2007 Fajr International junior and cadets championships in Iran, from where his pupils came back with a clutch of medals. His next international assignment was to the 27th Open Golden Racket international tournament in Vietnam in 2013, where the Indian women’s squad claimed bronze.

As national coach for the 2015 India Junior Open at Indore, Venu shepherded the junior girls squad to gold. Three years later, the junior and cadet girls won team event bronze medals in the Thailand Open. Enabling those international outings were the dozen bronze, four silver and eight gold medals his players brought AP and Telangana in individual, doubles and team events in the cadet, sub-junior and junior categories over a decade from 2006 to 2016.

In recognition of his expertise, Venu was invited as coach for the 2012 junior National coaching camp at Indore. Promising players from his stable are seasoned internationals Varuni, Rachana A., Ayushi Ghia, Tejeesh and  Jishnu Vakharia among others. While he would never grudge them their success, his wards have made huge strides in their sport and careers. Venu remains unmarried, wedded to his craft, often unsung and unrecognised due to his quiet efficiency and low profile.

A. Joseph Antony was a Sony TV commentator for the 2018 FIFA World Cup, more recently Euro 2020, Copa America 2021 and Tokyo Olympics 2020. The author of ‘My way—The biography of M.L. Jaisimha’ (Amazon, Apple Books) and a history post-graduate from the University of Hyderabad, he was a Senior Assistant Editor with The Hindu in Hyderabad.