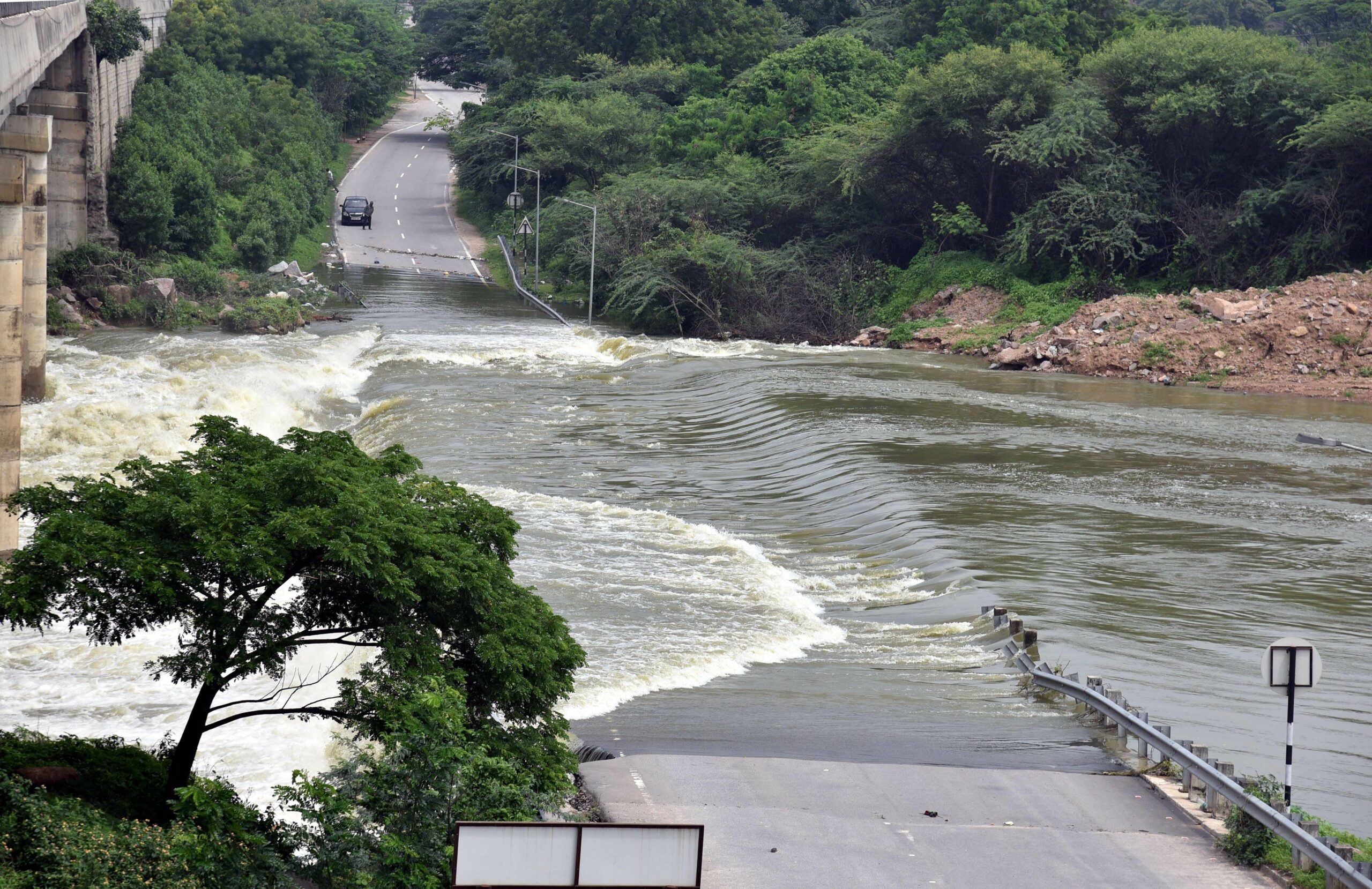 Hyderabad: Over the past week, many gates of the Osman and Himayat Sagar reservoirs have been lifted to release excess rain water once both the lakes were full. As a result, several homes built on the downstream and riverbed of the Musi river have been flooded, and thousands of people have been affected.

Activists claim that gates of both lakes are being lifted frequently now than before due to encroachment in the of the catchment areas of the Osman Sagar and Himayat Sagar. This, they say, is a direct result of the scrapping of Government Order 111 (GO 111) by the Telangana government. The two lakes were built in the 1920s and 1930s to stop water from entering the Musi river, to avoid flooding of Hyderabad.

Noted activist Lubna Sarwat, through a press statement, said that Hyderabad Metropolitan Water Supply and Sewerage Board’s (HMWS&SB) move is “illegal and immoral”. The FTL level of Himayat Sagar is 1,763.5 feet while for Osman Sagar is 1,790. Both lakes were essentially built to stop water from flooding Hyderabad after the great Musi river floods in 1908. About 15,000 people are said to have died in it.

Sarwat complained that the present FTL marked by the authorities is due to shrinkage of the water bodies. “The storage capacities are down due to vast encroachments in Himayat Sagar and Osman Sagar by the land mafia,” she added. The Musi river runs across a 50 kilometre-odd radius around Hyderabad, and has been more or less turned into a sewer today.

With the help of a report of a fact-finding visit, Sarwat stated that there were constructions, compound walls, fences and vast land stretches inside the FTL boundaries of both lakes. FTL pillars of HMWS&SB had been found uprooted, she claimed. “The authorities must take up dredging of landfills inside the FTL boundaries and remove all encroachments. Both Osman Sagar and Himayat Sagar, which are tributaries of the Musi river, must be brought back to their original water holding capacity, she added.

Another activist, who did not want to be named, said that large scale encroachments of the lakes began yeas ago. “The catchment areas of the Osman Sagar and Himayat Sagar began before relaxation of GO 111. The catchment area of Himayatsagar and Osmansagar, according to the government agencies, is about 584 sq km i.e., 58,400 hectares. Because of all thus, the Musi river in Hyderabad gets flooded easily,” he added.

A total of 84 villages in Shamsabad, Moinabad, Chevella, Rajendernagar, mandals mainly fall in catchment areas as per the now revoked G.O 111. In recent years, a lot of real estate activity started in these mandals with ventures coming up on acres of land. Plots have also been sold for villas and farmhouses and other developmental activities near the Osman Sagar and Himayat Sagar. What is happening is ironic, given that these two lakes are supposed to protect Hyderabad from the Musi river during rains.

Realtors were waiting for GO 111 or be scrapped

Realtors from and around Hyderabad were confident that the state government revoke GO 111. It finally happened this year, and has paved the way for a real estate boom. With that, as more construction happens, rains water will fill up the Osman Sagar and Himayat Sagar sooner. That will lead to the water board having to release water into the Musi river sooner. Finally, homes on riverbeds of the Musi in Hyderabad will be frequently flooded.

“After real estate activity picked up across mandals, small ponds, village tanks, wells and other water bodies were filled up by developers. Due to that, several water storage points in the catchment areas of Osman Sagar and Himayat Sagar have disappeared. Both lakes now fill up faster and Hyderabad is likely to get flooded more easily,” added the activist.

The Himayat Sagar feeds on the river stream Esa while the Osman Sagar on the river Musa (both together meet at Tipu Khan bridge, and are hence called Musi). Very few people are aware Esa is the tributary of Musi river and that it originates somewhere near Pargi . Musa river originates from Vikarabad at Anathagiri Hills, about 90 kilometres from Hyderabad.

Osman & Himayat Sagar have gone dry in the past

Both the reservoirs were constructed by building dams on the Musi (also known as Moosa) river and Esa River to protect Hyderabad from floods. The proposal to build the dams came after a major flood during the reign of the sixth Nizam Mahbub Ali Khan (1869-1911) in 1908, in which more than 15,000 people were killed.

Recently the Telangana government revoked GO 111 as it was felt Hyderabad no longer depends on these two reservoirs for water supply. Hence, it said and there was no need to continue with the restrictions on development in the catchment radius of the Himayat Sagar and Osman Sagar, both of which are tributaries of the Musi river.

Hyderabad’s drinking water requirement has increased to more than 600 million gallons per day (MGD). It is being drawn from other sources including the Krishna River. Water from the Osman Sagar and Himayat Sagar reservoirs amounts to just about 1 percent of the daily requirement.

Activist Dr Lubna Sarwath, who is also the president of the Water Resources Council, said that before the government revoked GO 111, there were already over 10,000 illegal constructions around the two lakes.

As per the EPTRI Study Report of 2007, inflows into the Osman and Himayat Sagar lakes were dwindling. Many times both lakes have dried up ( reduced to their ‘dead storage levels’) due to massive obstructions and diversions of inflows due to construction of check dams/water harvesting structures. There are more than 28000 such structures in number for the 2 lakes in their entire catchment areas.

However, with unprecedented rainfalls since the last three years, inflows have sharply increased into the Osman and Himayat Sagar. “Had the authorities prevented encroachments and illegal structures in the catchment areas, it would not have been this way. The government should have protected small water bodies that stored water as well. Then the situation would not have been so bad for colonies on the river bed of the Musi river,” points out another activist.

With doors of Musi River being opened like never before in the last 20 years, low lying areas are getting inundated across Hyderabad. The city administration itself is not aware of the magnitude of the damage it might cause. Several areas alongside the Musi River at Chaderghat, Moosarambagh, Nagole and beyond bear brunt of the in disproportionate release of water.