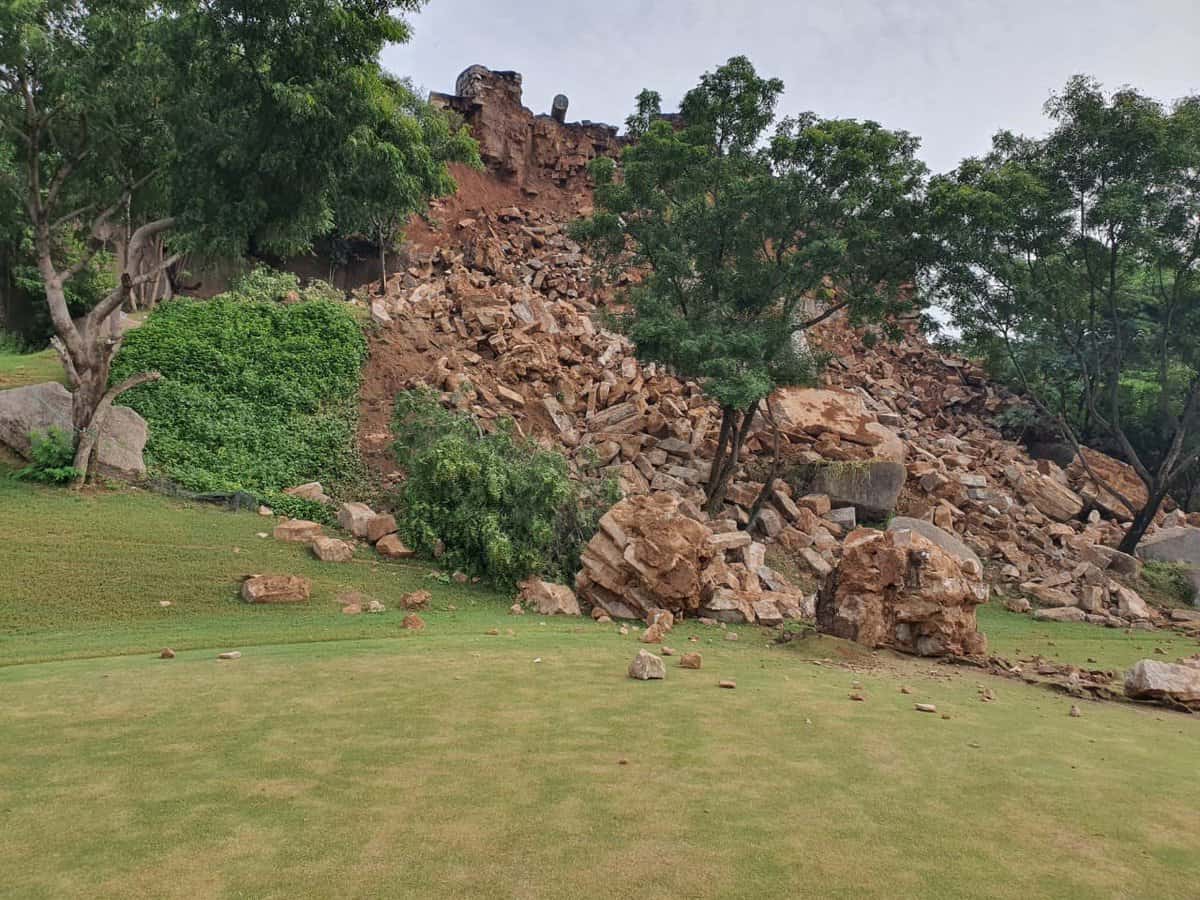 Hyderabad: Nearly six months after parts of the historic Golconda fort were damaged due to heavy rains last year, the Archaeological Survey of India (ASI) is yet to take up repairs. A portion of a wall inside the Bala Hissar area (main inner palace, where tourists visit) and the Majnu bastion of the Naya Qila (an extension of the fort, on which a golf course has been built) had collapsed due to heavy rains that lashed Hyderabad In October 2020.

The Telangana office of the ASI had sent repair estimates to its head office last year itself, but there has been no development on the matter. The issue of Golconda fort’s upkeep once again was in focus when the Telangana High Court pulled up the state government and the ASI, asking what they were doing with regard to maintenance of the fort, and also the Qutb Shahi tombs complex, which is currently being restored by the state’s archaeology department and the Aga Khan Trust for Culture (AKTC).

Last year on October 13, a huge portion of the historic Majnu Burj (bastion) in the Naya Qila area of the Golconda Fort came crashing down due to heavy rainfall that has been lashing Hyderabad over the last few days. The bastion was already in a vulnerable state since September, and wedge marks on the rock show some human intervention with regard to the collapse.

When contacted, an ASI official from Golconda fort, who did not want to be quoted, said that the estimates to repair the Majnu bastion were sent to the ASI’s head office last November itself, and that the local office in Hyderabad has been waiting for the work to get approved. Apart from the Majnu bastion, another portion of the fort’s wall inside, which was damaged, has to be repaired. Proposals for both are still pending from New Delhi, he told siasat.com.

“We had sent the estimates last year itself in November-December. The proposals are in the final stages, and it should be approved by end of April. Once that is done, we will put put tenders and then start repair work,” the official added.

In Hyderabad, the Golconda Fort and the Charminar are the only two monuments that fall under the jurisdiction of the ASI, which works the central government, while all the other heritage sites like the Qutb Shahi Tombs come under the purview of the Archeology Department of Telangana government.

History of the Golconda fort

The Golconda Fort’s origins are traced back to the 14th century when the Rajah of Warangal Deo Rai (under the Kakatiya Kingdom which ruled from Warangal) built a mud fort. It was taken over by the Bahmani Empire between 1358 and 1375. Later, it was developed into a full-fledged citadel by Sultan Quli who founded the Qutb Shahi kingdom in 1518 following the death of last sovereign of Bahmani Emperor Mahmud Shah (Bahmani).

Sultan Quli was a commander and later governor of Tilang (Telangana), under the Bahmani Empire (1347-1518), when its second capital was at Bidar. Sultan Quli, who was originally from Hamadan, rose to the level of Governor under the Bahmani Empire. At this point of time he was given the fort, around which he began developing a walled-city. It eventually came to be called Golconda Fort (name derived from Telugu Golla-conda, or shepherds hill).

The fort has 87 bastions, and eight gates, of which a few are not accessible to the general public as they are under the army control. It is believed to be one of the Deccan’s most impregnable forts, and had kept Mughal emperor Aurangzeb’s army at bay for eight months until he succeeded and conquered Hyderabad in 1687.

Hyderabad was founded in the year 1591 by Mohd. Quli Qutb Shah, the grandson of Sultan Quli, with the Charminar being the city’s foundation. The city turned 429 years old in 2020.