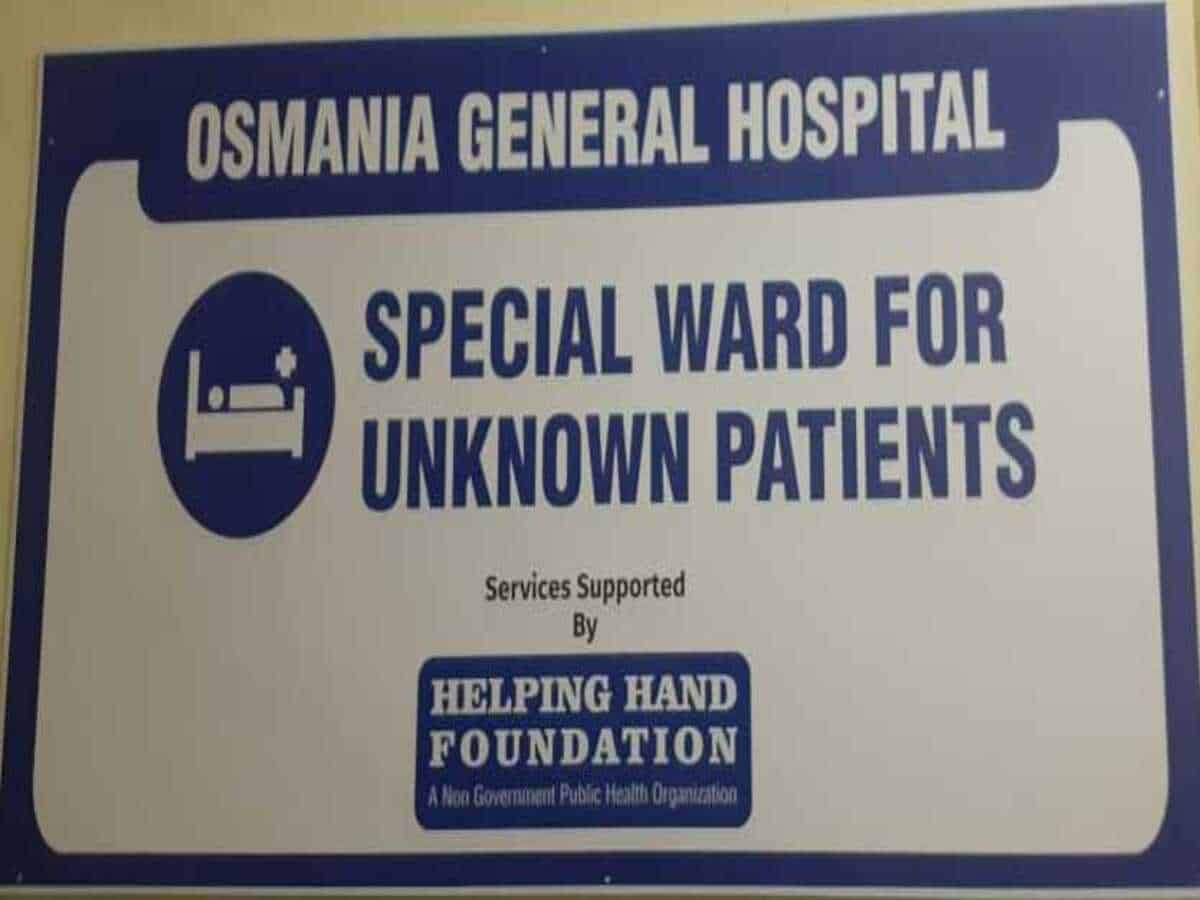 Hyderabad: Osmania General Hospital’s (OGH) special ward for unknown patients, supported by the Helping Hands Foundation (HHF), is turning out to be a boon for the city’s homeless and poor. Many with no families who end up at OGH after falling severely ill are being treated with the due care they deserve.

When this reporter visited the special ward, a man who suffered from epileptic seizures was brought in after the back of his head tore open after fell to the ground during one such seizure. He was spotted by officials and admitted into the ward. His condition is being monitored by the doctors as he recovers. Like that, HHF provides help for such homeless and ailing patients found on the streets of Hyderabad who are unable to fund their own treatment.

The new ward was set up few weeks ago by Helping Hands Foundation (HHF) with the aim to provide medical facilities and services to the homeless suffering from physical ailments.

After a report from police officers on ground, the NGO receives permission from the Resident Medical Officer (RMO) and admits patients into the ward. Patients are then cleaned up and then given clean garments to adorn before being referred to a doctor for treatment.

Employees at the ward said that patients are admitted to the ward until recovery and discharged either to an old age home or a suitable rehabilitation center later. Bodies of those who die during the treatment are sent to the mortuary by the foundation.

“Sick and homeless found around the premises of the hospital are brought in to be given treatment and are placed within the ward serviced by HHF. Patients used to be brought in earlier as well, but did not have designated wards. After the treatment the patients are rehabilitated to suitable institutions,” said Dr. Nagender, superintendent of OGH.

Nawaz, the duty in-charge from HHF at the special ward said that patients who are brought in are usually at the worst stage of their ailment. “They may also suffer from underlying mental health conditions. They do not have money to fund their own treatment or food so we provide them with 3 meals a day, medicines and vitamins to bring back strength to move around and do their own chores,” he added.

The ward inaugurated 3 weeks ago with a capacity of 20. On Monday, September 27, there were eight patients, each suffering from different ailments. HHF has also set up help desks at various hospitals like Gandhi Hospital, Nizam’s Institute Of Medical Sciences (NIMS) etc., to provide financial and medical support to those financially distressed and ailing. They have been working with the hospital for 10 years to provide free wheelchair and stretcher services. This ward is a first among many, set up upon the suggestion of the hospital.