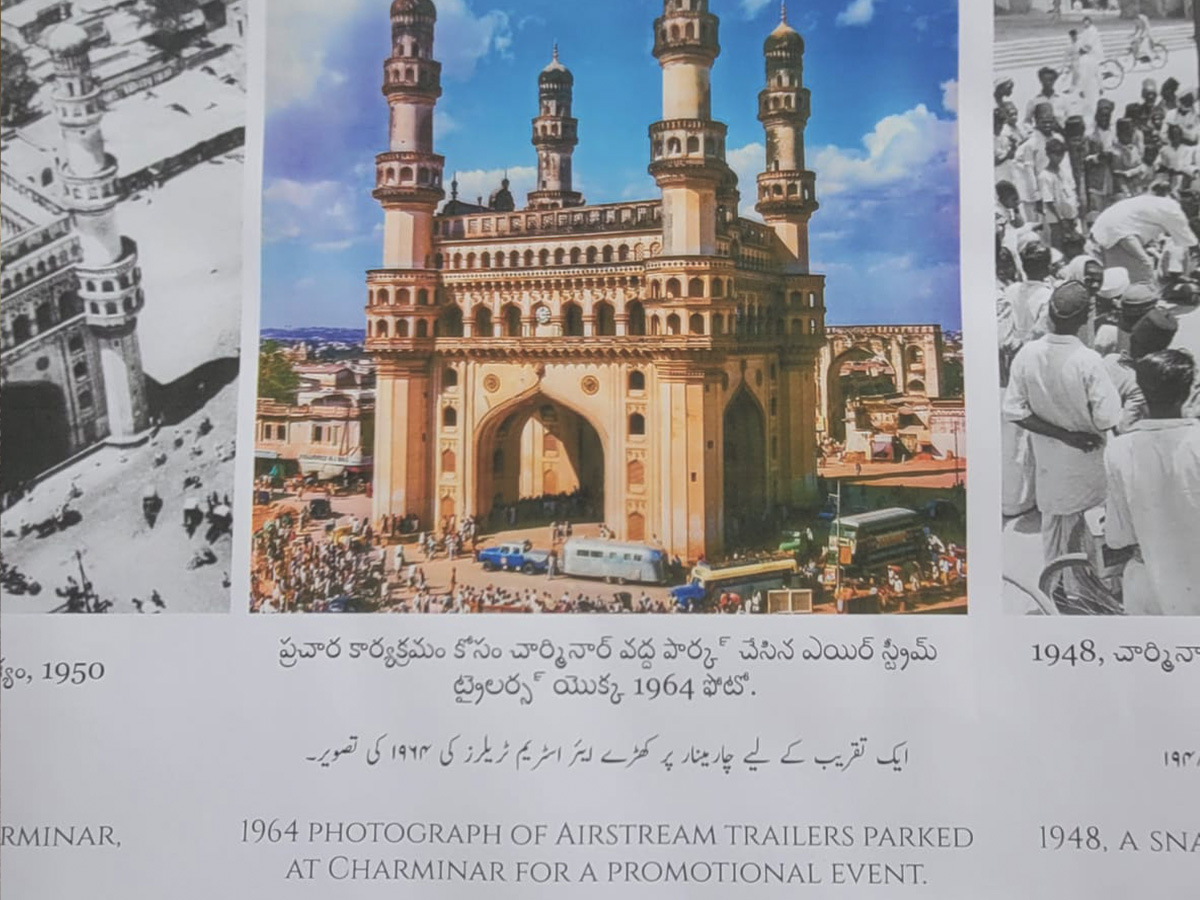 Hyderabad: A photography exhibition was held here at the Charminar on Sunday to mark the city’s completion of 444 years as per the Hijri (Islamic) calendar. Hyderabad was founded in 1591 by Mohd Quli Qutb Shah, which some believe was on 1.1.1000 (first month of Muharram) as per Hijri.

Several archival images of the Charminar were put on display inside the ground floor of the monument to mark the event. Several people from Hyderabad on Twitter and social media also posted their own images and other famous ones to celebrate the same. Images from the photography exhibition also showed that the Bhagya Laxmi temple at the Charminar was in fact not there until half a century ago.

The photo exhibition at the Charminar to celebrate Hyderabad was held by Deccan Archive in support witfrom INTACH. It will be on display for another week at the monument.

The temple, according to many eyewitnesses and old timers, is believed to have come up around the late 1960s. Prior to that, a small stone or shrine was kept there by a woman to mark the death of her mother. The temple at the Charminar today has become a bone of contention, as it faces a legal challenge to be there. It has also gained political significance as almost all politicians are also its patrons.

Debate over date of Hyderabad’s foundation as per Hijri

in Hyderabad However, many from Hyderabad also have debated about the foundational date of Hyderabad on the first day of Muharram. Mohd Qui Qutb Shah, the city’s Shi Muslim founder of the Golconda dynasty (1518-1687, built the Charminar in 1591 as the foundation of Hyderabad. Prior to that, Golconda fort, built by three kings before him, functioned as a walled-city.

The argument by many is that Mohd Quli Qutb Shah in all likelihood would not have built the Charminar and founded Hyderabad on the first day of Muharram. The month, especially its first 10 days, are marked with piety by Shia Muslims (followers of Imam Ali). They mourn the death of Imam Hussain, the son of Imam Ali (son-in-law and cousin of Prophet Mohammed). Imam Hussain was killed in Karbala with 72 of his followers on the 10th day of Muharram in 680 AD.

This year marks the 1444th year of Islam as per the Hijri calendar (coinciding with 2022 of the Gregorian calendar).

The Golconda Fort’s origins are traced back to the 14th century when the Rajah of Warangal Deo Rai (under the Kakatiya Kingdom which ruled from Warangal) built a mud fort. It was later taken over by the Bahmani Empire between 1358 and 1375. It was later developed into a full-fledged citadel by Sultan Quli who founded the Qutb Shahi kingdom in 1518. He became king following the death of last sovereign Bahamani emperor Mahmud Shah Bahamani.

The fort has 87 bastions, and eight gates, of which a few are not accessible to the general public as they are under army control. It is believed to be one of the Deccan’s most impregnable forts. It also kept Mughal emperor Aurangzeb’s army at bay for eight months when he laid siege to Hyderabad in 1687. Aurangzeb succeeded and ended the Qutb Shahi reign that year and took Abul Hassan Tana Shah, the last Golconda king, captive.

The Charminar is Hyderabad’s foundational monument. Built in 1591, it was constructed to mark the city’s establishment by Mohammed Quli Qutb Shah, the fourth ruler of the Qutb Shahi (or Golconda) dynasty. Prior to the Charminar, the Golconda fort was a walled city, from where the first three kings Qutb Shahi kings had ruled.

After Hyderabad was founded, the fort was eventually turned into a military barrack. It was also the place from where the final Qutb Shahi-Mughal war was also fought in 1687, after Aurangzeb attacked the kingdom. He succeeded after an eight month long battle, after which the entire Qutb Shahi area was brought under Mughal territory.

The Nizams (Asaf Jahi dynasty), who ruled next, were high-ranking Mughal commanders originally. The first Nizam, Mir Qamruddin Khan, attained the position in 1724 and ruled from Aurangabad, which was the capital of the Deccan (Nizam territory). His father and grandfather were part of the Mughal armies that destroyed Hyderabad in the final war between the Golconda and Mughal dynasties in 1687.