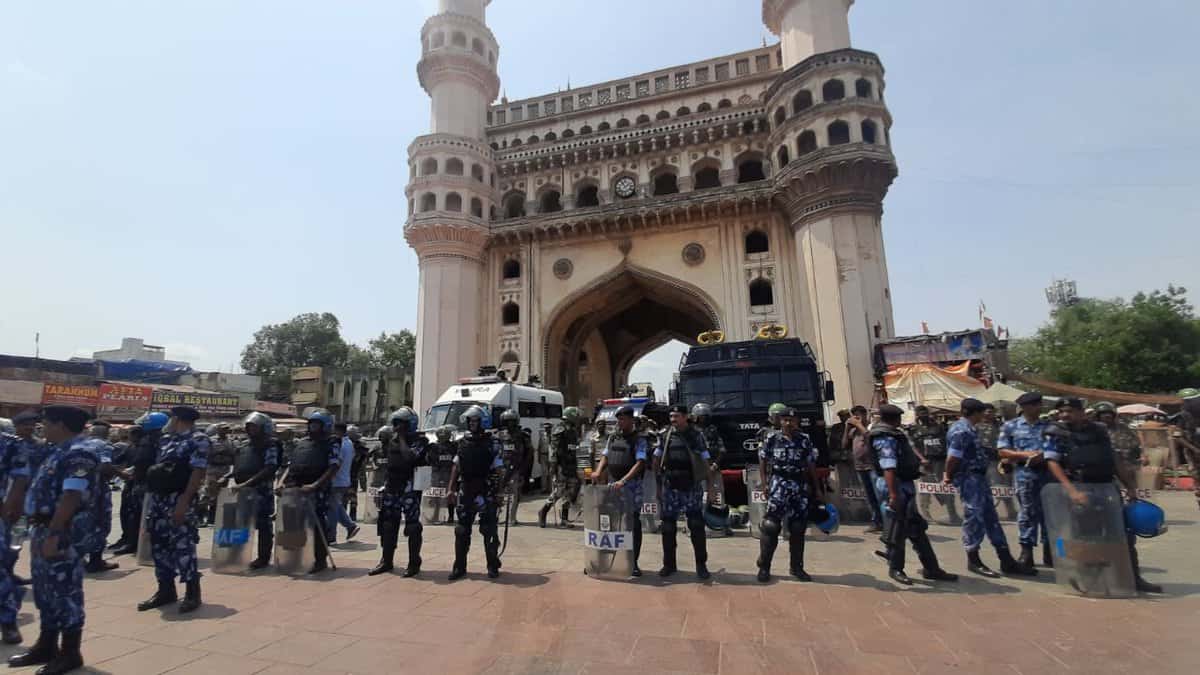 Hyderabad: The controversy that arose over the remarks of now suspended Bhartiya Janata Party leaders Nupur Sharma and Naveen Kumar Jindal is robbing officials of the Hyderabad city police of their peace.

No sooner than any protest “pro or anti Nupur” program is held, another report of a counter protest or programme drops in their Whatsapp. Since the Nupur Sharma and Naveen Kumar Jindal issue picked up in the first week of June, police officials have ben spending more time in office with focus more on preventing a communal flare up.

Several rounds of meetings have been reportedly held between higher police officials everyday from the Hyderabad police to see that peace prevails.

According to cops, Telangana chief minister K Chandrasekhar Rao (KCR) is very particular about the law and order situation in the state and has reportedly been regularly asking higher ups to see that peace prevails.

From the beginning, KCR has reportedly been that reiterating if peace prevails then there would be development and investments in Telangana. With the CM focusing more on maintaining law and order, the present controversy with the BJP leaders is proving to be a litmus test for the Telangana police.

Although the situation in Telangana remains by and large peaceful barring a couple of instances where police used force to disperse unlawful assemblies, top cops are keeping an eye on every small development to ensure it does not grow into a major communal flare up.

“All of us are apprehensive because vested interests of both sides are trying to rake in trouble. We understand the emotions of any group or community, but want to ensure that no crosses their limits,” said a senior police official of Hyderabad police.

As a first step, the police booked a case against Nupur Sharma at Hyderabad Cyber Crime police station for her blasphemous comments, and another case was booked against AIMIM (Inquilab) party spokesperson Qavi Abbasi for his ‘One crore rupees bounty’ remarks. Soon after, BJP firebrand leader T Raja Singh was booked by the Kanchanbagh police for hurting religious sentiments of Muslims.

As things were slowly turning normal, the Bhartiya Janata Yuva Morcha came into picture and organized rallies in support of Nupur Sharma at Bowenpally on Tuesday night. A near clash between two Muslims and Hindus was averted, after the unauthorised protest program organized by the BJYM at Dr. B R Ambedkar statue. The situation remained tense in Bowenpally, Hasmathpet and Alwal for two days.

Then the announcement of the ‘Million March’ came from Mohd Mustaq Malik, convener, Joint Action Committee (JAC) Andhra Pradesh (AP) and Telangana of the Tehreek Muslim Shaban. A case was also booked against Mustaq Malik for alleged hate speeches in a video message aimed at informing the masses about the proposed ‘Million March’.

Mustaq Malik, known for his arm twisting tactics managed to secure permission for a public meeting in exchange for the ‘Million March’ program. It will be held at the Chanchalguda junior college, and has been planned for June 18.

Another meeting ‘Jalsa Azmat –e-Mustafa’ will be organized by the Mushtarika Majlis –e-Amal (United Muslim Forum) in Darussalam  – the AIMIM party headquarters on Saturday as well. “With two meetings a lot of bandobast arrangements are to be made. All wings are working to see peace prevail in the city,” said another official.

Two days ago, a group of miscreants pasted posters of Nupur Sharma on roadsides demanding her arrest and other provocative comments at Dabeerpura. A case has been booked at the Dabeerpura police station in connection with it.

Equally in motion are the right wing groups like the Viswa Hindu Parishad, which gae a call for the protest demonstrations on Thursday demanding action against “Islamist Jihadis” for resorting to violence in the country. The protest call again put the police on their toes.

Senior officials say the things will continue to be challenging for another few days. “At least till the Eid ul Adha passes off we need to be on full alert. Non local groups are also hyperactive in the State. Again the political scenario is also charged up,” explained an intelligence official from the Hyderabad police.