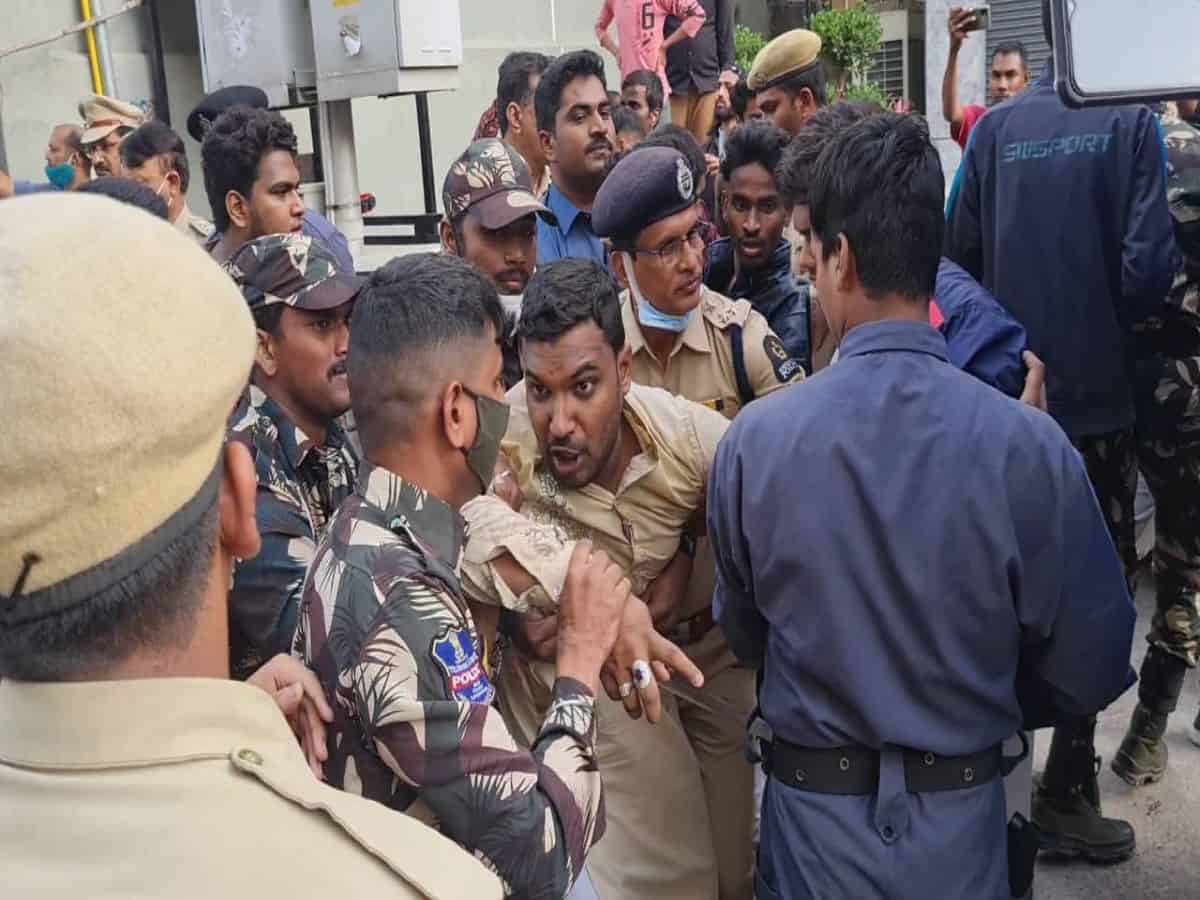 Hyderabad: A huge number of cops have been deployed outside the offices of the Hyderabad police commissioner, the Director General of Police office at Lakdikapul, and the old police commissioner office at Purani Haveli and other important places in the city after protests erupted against BJP MLA Raja Singh for his remarks against Prophet Muhammad.

Meanwhile, police have also increased security in and around Mangalhat and Dhoolpet fearing attacks on Raja Singh. Police officials said that security is being heightened, as a ‘Chalo Goshamahal’ protest is being planned as seen on social media. Moreover, there will also be higher vigil at the inauguration of the new Chandrayangutta flyover by IT and industries minister KT Rama Rao’s (KTR) on Tuesday.

Rapid Action Force and police force from reserve wings of Telangana State Special Police, GreyHounds and neighboring districts have also been deployed. Police pickets have also been posted at communally sensitive areas of Hyderabad and in the old city, it has been learnt. Senior officials said they are also reviewing Raja Singh’s security (he has a bullet resistant vehicle, plus two gunmen round the clock).

Senior police officials held a meeting in the morning and put the entire state police machinery on a tight vigil. A high alert has been unofficially declared in the erstwhile districts of Adilabad, Karimnagar, Nizamabad, Vikarabad and Mahbubnagar, said senior officials.

Reports on social media also suggest that more protests against Raja Singh may be held during the day at different police stations in Hyderabad. Raja Singh had opposed the show of comedian Munawar Faruqui and demanded the government to cancel it. He said last week if the show is allowed, another “comedy” show will be held on August 22 and the government will be responsible for it.

True to his words BJP MLA Raja Singh released a video late night on Monday. Calling it “comedy”, he made derogatory remarks against Prophet Muhammad, and also abused comedian Munawar Faruqui and his mother two days after the comedian’s show was held in Hyderabad.

Raja Singh’s comments on Prophet Muhammad have lead to scores of people protesting on the streets demanding his arrest. Following his video, the BJP MLA was booked by the Dabeerpura police for his remarks. Many people were also taken into custody by the police on Tuesday after protests broke out.

“….I thought to myself, ‘He is abusing Lord Ram and Sita’ so I should research about the almighty of his and people who wear round caps (Muslims). The moment I did it, I found something very shocking in a video. The video said it s about a 53-year-old man. In that, it says that the man married a six-year-old (referring to the Prophet Muhammad),” said the Bharatiya Janata Party (BJP) MLA Raja Singh in the 10 minute 27 seconds video

On Tuesday morning, the Hyderabad police took into custody several persons who were protesting and demanding the arrest of Raja Singh. The protest was going in front of the Hyderabad commissioner of police office at Basheerbagh. More than 100 persons were taken into custody by the police after repeated attempts to disperse them proved futile.

Hundreds of youngsters were staging a protest in front of police commissioner’s office after T Raja Singh. The BJP MLA, while not naming the Prophet directly, made references and spoke about his personal life. He also lambasted comedian Munawar Faruqui and Muslim community in his video.

The protest has been going on since last night in front of Hyderabad police commissioner’s office at Basheerbagh. In the morning after the numbers of protesters swelled, police officials physically lifted the protestors and shifted them to police vehicles in order to avoid a large gathering. Hyderabad Youth Courage president Mohd Salman and other workers are taken into custody as well.