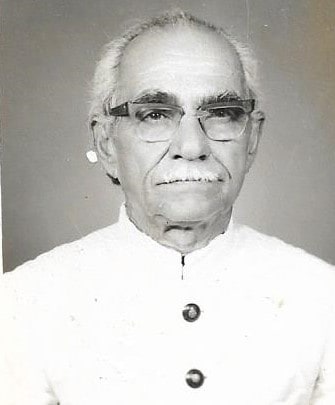 Hyderabad: In the years leading up to the Indian independence struggle, it was fairly common for those who could, to study in the United Kingdom (UK). India’s first Prime Minister Jawaharlal Nehru and even Dalit icon Dr BR Ambedkar had studied there. However, freedom fighter Abid Hassan Saffrani from Hyderabad, being staunchly opposed to the British rule, instead chose Berlin as his education destination. It would change his life forever.

A staunch Gandhian, Saffrani met Bose while studying in Berlin, and would later on become the former’s only ally who travelled with him during a submarine journey from Germany to Japan during the Second World War (WW2). His journey in fact is one of the most remarkable stories from the days before India’s independence, given his close association with Bose, and his participation in the freedom struggle against the British.

Last week, he was also posthumously awarded the ‘Netaji Award 2021’ in Hyderabad. The award was handed over to Abid Hasan Safrani’s family in Hyderabad on April 8, for his contributions to India’s freedom struggle against the British.

Who was Abid Hasan Safrani?

Born in Hyderabad on April 11, 1911, to Amir Hasan and Fakhrul Hajia Begum, he was named Zain-ul-Abdin Hasan. Safrani completed his schooling from the St George’s Grammar School in Hyderabad, which was then one of the city’s most prestigious educational institutions. After that, he joined the Nizam College, but left it soon to join
Mahatama Gandhi after he gave a call to join the struggle for freedom.

Safrani had also joined the Congress Volunteer Corps in Bombay, and later followed his brothers and joined Gandhiji’s Sabarmati Ashram in Ahmedabad. Eventually, he opted to study in Berlin, Germany, which would forge his future as a freedom fighter and close aide of Netaji Subhash Chandra Bose during World War 2. Safrani had joined the Indian National Army (INA), led by Bose, and would spend days across different countries, before coming back to India around independence.

As against the convention then, Safrani In 1935 travelled to Berlin to pursue engineering as per the desire of his
mother, who was also forefront in the freedom struggle. It was there that he met Netaji Subhas Chandra Bose, whose call to join the freedom struggle was promptly answered by Abid Hasan Safrani, who even left his course and joined Bose as his personal secretary and interpreter.

Bose had gathered the captured Indian soldiers fighting for the British to Netaji, who used these liberated prisoners of war to raise the Free India Legion. The group was also another place where its members would discuss and envision a free and fair India. With WW2 in full swing, the Axis powers (Germany-Japan-Italy) were engaged with the Allies (USA-Russia-Britain) and Netaji decided to shift base to Japanese territory closer to India.

Safrani, who was ready to do his bit for Indian independence, undertook the submarine journey with Bose, and was his sole companion on a historic journey from from Kiel in Germany to Japanese territory in Malaysia. They started their journey in a German submarine and switched to a Japanese near the coast of Madagascar, which was later recorded as the first inter submarine transfer on high seas.

On reaching Singapore, Bose took over the Indian National Army (INA), which had been formed by the Japanese intelligence unit on the same pattern as Netaji’s Free India Legion of Germany using captured Indian prisoners of war. Safrani was constantly with the INA fighting from Burma to Imphal in India, and penned his experiences in an article penned by him titled ‘Our Men in Imphal’.

However, the INA eventually began losing and was finally defeated as the Allies won the war. Towards the fag end, Abid hasan was asked return to Hanoi while accompanying Bose from Singapore to Tokyo. He was then captured by the British and imprisoned. Many of the INA officers were in fact put on trial in Delhi after the war, but most were acquitted as there was a public outcry against these trials as people considered them as freedom fighters and not war criminals.

Safrani was also released from Singapore jail and returned to India as it neared independence. After India attained freedom, then Prime Minister Pandit Jawahar Lal Nehru Inducted him into the Indian Foreign Service (IFS). He was posted to several countries including Egypt, China, Switzerland, Iraq, Syria, Senegal and Denmark.

An issue that arose in the INA was the need of a common salutation that was essential to maintain discipline of the army. And English ones were out of the question as troops felt betrayed by the British. It was then that Safrani was entrusted with the task to come up with something new. Initially he had proposed “Hello”, but that rejected outright by Bose. It was his next proposal that would eventually be accepted.