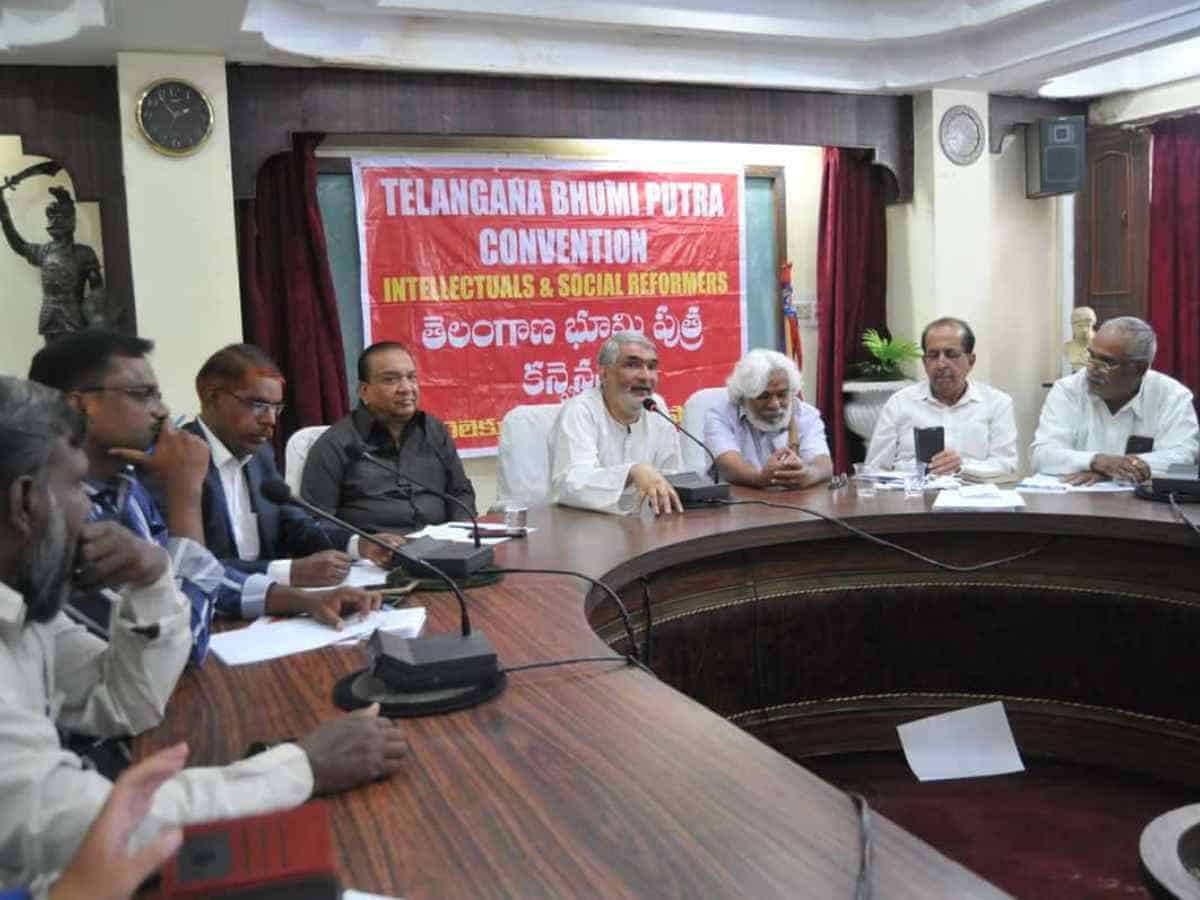 Hyderabad: “The ‘Telanganites’ must get 80 percent reservation in private sector,” said Managing Editor of Siasat Daily Zaheeruddin Ali Khan.  “There is a need to launch an awareness campaign in the state’s universities and colleges to revive the essence of Telangana movement to achieve its true objects.”

Khan was speaking at a round table conference “Telangana Bhumi Putra Convention”  held on Sunday at Madina Education Center under the aegis of “SC, ST, BC and Muslim Front”.  He said lack of skilled labors in a state may cause influx of labors and traders from other states.  “There might be shortage of skilled labors in Telangana, but the state government must provide training facilities for local manpower and ensure 80 percent jobs for them in private sectors,” Khan said.

The convention organized by the intellectuals and social reformers of the state was headed by the SC, ST and Muslim Front Chairman Sanaullah Khan and attended by revolutionary poet and singer Ghadar, Justice Chandra Kumar, B Narsing Rao, K Krishna, M A Siddique, Prof Anwar Khan, Khalid Rasul Khan, Dr. Javid Iqbal, Prof G. Vinod Kumar and many heads and officials of the organizations working for the welfare of Dalits, Tribals, Scheduled Castes and Minorities.  The convention – devoted to the youths of the state – demanded 80% reservation for “Telanganites” (Telangana locals) in private sector jobs.

“Pamphlets must be prepared and distributed among the state’s youth to inform them about the concept of “Bhumi Putra” (Son of the soil) and its significance.  The Bhumi Putra concept was the true essence of the Telangana Movement which was to ensure jobs for the state’s local population,” Khan said.

Ghadar even suggested a name “The South India Azad Party” for such a political party.  “All sections including Dalits, Tribals, Scheduled Castes, backward class and minorities must come on a single platform and the movement must be initiated from temples and mosques,” Ghadar suggested.

Justice Chandra Kumar described “Bhumi Putra” movement as the need of the hour and said, “The ruling class and their supporters are declaring those who speak about the price rise of Petrol and Diesel as ‘traitors’ and glorifying those who blindly support the government’s policies as ‘patriots’.  The youths of the country are going astray due to increasing price rise and unemployment.  Giving job reservation to the locals in private sector would end unemployment and social evils.”

Speaking on the occasion Prof G. Vinod Kumar said the absence of Muslims in the state’s public and private sector jobs is the main reason for the Muslim’s backwardness in Telangana.  “Osmania University which was set up by Nizam has not even one percent Muslim employees.  It is just and equitable to provide jobs to the Muslims in public and private sectors in keeping with their ratio in state’s population,” Kumar said.

All other speakers affirmed their support to the “Bhumi Putra” concept and demanded 80% reservations to “Telanganites” in private sector.  They assured their fullest cooperation and help to this movement.