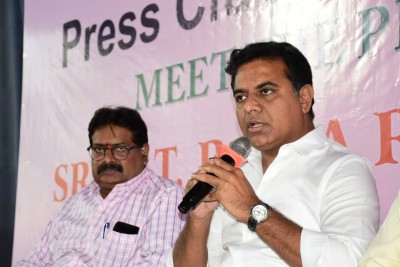 Rama Rao, who is son of Chief Minister K. Chandrasekhar Rao, said TRS lost in 10-12 seats by an extremely narrow margin of 100-200 votes.

He, however, asked the party not to be disheartened over the outcome. He said people of Greater Hyderabad blessed the TRS as the single largest party.

KTR, as the TRS leader is popularly known, said the party will analyse the poll results and address all issues as to why there was no desired outcome.

“We will discuss in the party,” was all he said while responding to queries on whether the TRS will take support from the Majlis-e-Ittehadul Muslimeen (MIM).

With 55 seats in 150-member GHMC, the TRS has emerged as the single largest party. It was leading in one division. The Bharatiya Janata Party (BJP) came second with 47 seats and was leading in two divisions.