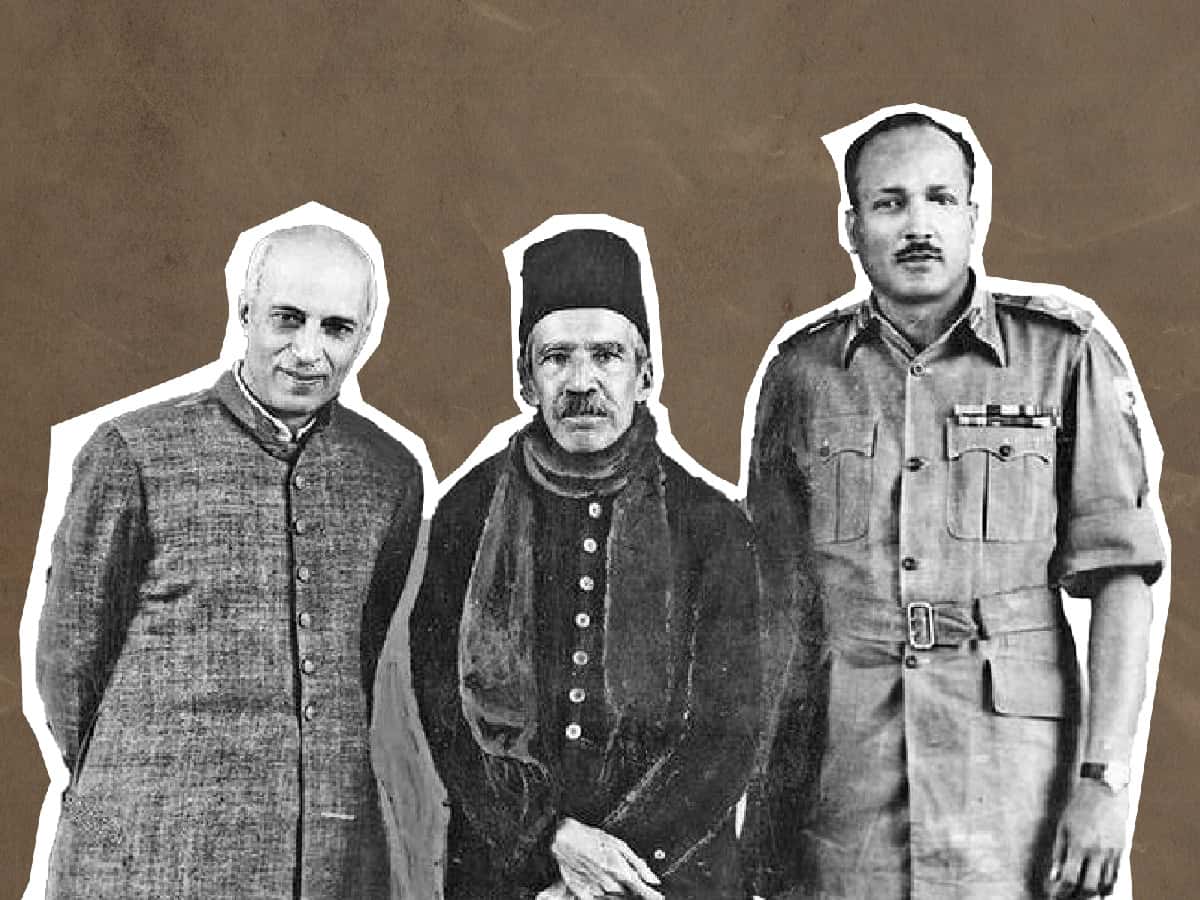 The political parties and social organizations have their own version of politics construed as history. Disciples of history today are subjected to political needs. Ironically, Hyderabad’s history and its integration with Indian Union have become a means of electoral politics. Therefore, I have decided to place certain facts before the readers to judge for themselves how Hyderabad State became part of the Indian Union. In view of the Liberation/Integration political controversy, I am placing the facts from the Crown Representative Reports, Mountbatten papers, Jawaharlal Nehru Papers, and Constituent Assembly Debates which are not available to the general public.

After years of negotiations with various leaders, parties and taking note of the political situation in India British finally decided to divide India.

Indian Independence Bill was passed by the British parliament on 18 July 1947 for creating two dominions India and Pakistan. Secretary of State for India clarified Clause 7 Sub-section (1) of the Act relating to the Princely States “from the date new dominions are set up the treaties and agreements which gave us suzerainty over the States will become void.” That was how the Princely States have become part of either of the Dominions.

Earlier the Nizam had written to Mountbatten that Hyderabad would not accede to “either of the new Dominions” which in his opinion are “happily divided upon a purely communal basis”. The Nizam Government’s representative Walter Monckton argued with Mountbatten with regard to Hyderabad on June 7, 1947 that “The dynasty, a Muslim one with a predominantly Hindu population, would in any judgment commit suicide by joining Hindustan.” The Hyderabad was neither Muslim nor Hindu State, therefore, doesn’t join communally divided two Dominions. The Nizam earlier refused to entertain M. A. Jinnah’s invitation to join Pakistan.

The Union Government under Clause 7 designed Standstill Agreements to sign with the States aiming to control air communication, arms and equipment, control of commodities, currency and coinage, irrigation and electric power, national highways, and the State forces. Nizam signed such an agreement on 29th September 1947 thus Hyderabad transferred most of its power to the Indian Union. Then Extra-Provincial Jurisdiction Ordinance was promulgated enabling the Dominion Government to acquire and exercise executive and judicial powers in the Indian States. Literally, the States came under the Union Government. The Independence Act and the Ordinance empowered the Union Government to bring the States under Federal India. Union inherited federal India that was built under the Crown Representatives over a period but the 1935 Act has fully defined the Federation. The Indian Union cabinet under Jawaharlal Nehru wanted to play Operation Caterpillar with Hyderabad in June, later postponed to Operation Polo in September on the advice of the Western Command to bring the Razakars and peasant rebels under check. Finally, Polo was played between September 13 and17 popularly known as Police Action. As the Union expected Razakars gave stiff resistance to the Indian Army rather than the Nizam’s forces. When the Indian Army was reaching Secunderabad, Nizam obtained Mir Laik Ali’s resignation as the Prime Minster on 16th June and handed over the same to K M Munshi, Agent-General. The Nizam also declared his innocence by saying, “The vultures have resigned I do not know what to do.” Entire blame has gone to Mir Laik Ali cabinet that was running in alliance with Ittehadul Muslimeen and Kasim Razvi’s cooperation. Nizam proposed Mirza Ismail to be the next Prime Minister, but Munshi told him that the Dominion Government would have to decide the next course.

During such transition Nizam further declared on 23 September, 1950 “By methods reminiscent of Hitlerite Germany it [Razakars] took possession of the State; spread terror into all elements of society, Muslim and non-Muslim that refused to bend the knee to them; committed arson and looting on a large scale, particularly against the Hindus and rendered me completely helpless.” Nizam washed all his sins, if any, by politically integrating Hyderabad in the Union of India on 16th of September. The actual “surrender” of Hyderabad Army to General Choudhry has taken place on 17th of September.

Sardar Vallabhbhai Patel told the Constituent Assembly on 12 October 1949, “….(for) problems relating to the integration of the States and the changeover from an autocratic to a democratic order, the Government of India should exercise general supervision over the Governments of States till such times as it may be necessary. That was how the “integration of Hyderabad” started within the constitutional framework.

The Union government against this background has taken a softer political policy of integrating the Nizam into the democratic political process. Therefore, the Union had drawn Hyderabad into Indian Union through a political process, in Patel’s terms “changeover”, between June 1947 and September 1950. Democratic politics began to integrate all Dominions into what may be called the “Central Government.” The Nizam too understood the changed circumstances and willingly sat over the transition of Hyderabad to a representative political democracy. Nizam through a Firman dated 6th of December 1948 dissolved Hyderabad legislative assembly and ordered the preparation of electoral rolls for the expected Hyderabad Constituent Assembly with the intention of holding elections. On 24 November 1949, he communicated his willingness to be a party in the democratic political system, either keeping people’s movement or the stabilization of the Indian state in view. He declared that the constitution of India should be the constitution of Hyderabad State immediately after the adoption of the constitution. And in this situation M K Vellodi was appointed as Chief Minister of the State on 1 December 1949. This also means he was naturally agreeing to become party to a tradition of appointment of the Chief Minister on the advice of the Central Government that was, of course, the case earlier under the British Governor-General. The very proclamation of the commencement of the Sovereign Democratic Republic of India with his swearing-in as Rajpramukh is a completion of the constitutional process, correspondence between Hyderabad and the Indian Union.

What is significant is departing from the royal tradition he gave up his personal estate worth Rs. 30,000 million known as Sarf-e-Khas, of course with the understanding of an annual payment of Rs. 25 lakh to him. And finally, he abolished Jagirs, Samasthanams, and Maktas on 15 August 1949 in accordance with people’s demand to bring order to rural areas. This abolition was more in tune with the ongoing peasant movement. Though the Union Government agreed to honorific HEH the Nizam for Osman Ali Khan, but practically ex-Nizam was initiating the democratic process by abolishing Jagirs which earlier he opposed in the context of the peasant movement. It was exactly what Sardar Patel was talking about the transition from autocracy to democracy.

With this transition, new political structure and power hierarchy of Hyderabad was constituted based on the party system and Union administrative structure. It was all done under Nizam’s orders. Indian Muslims were confused about their relation to Indian State and politics after Pakistan’s formation and M.A. Jinnah leaving them in the lurch.

Separatist Muslim leaders of Hyderabad escaped to Pakistan including Mir Laik Ali. In this transition, about 23000 to 36000 ‘reported sympathizers of razakars’ were killed as per the Pandit Sunderlal account. The Muslims as a community have taken a little more time to adjust to the electoral politics of the new State of Hyderabad and subsequently, Andhra Pradesh was formed based on the Telugu language. In this changeover, the Hyderabad city Muslims felt deprived of their Urdu Raj and formed Majlis, a political party christening it as All India Majlis-e-Ittehadul Muslimeen in 1958 under Abdul Wahed Owaisi, a new generation lawyer. But they did not even understand how the Nizam’s Dominions were getting integrated into the Union under the aegis of Nizam himself.

However, they could not become a political party of Andhra Pradesh as they did not develop a political strategy beyond what was primarily built for them historically in Hyderabad. It was a big dilemma that the Muslim community of Hyderabad faced to identify themselves with the region along with co-religionists or to join the pan-Indian Muslim community, discarding or discounting the other religious communities of the region, and it is, interestingly, an unsettled matter till now.

The Muslims like other smaller castes/communities did not provincialize to speak in a single voice on demands – economic, social and political – or rights. Wherever they are a community of numerical strength they unite to bargain political power. That is how they are a hegemonic party and community in the old city. They constituted to have been about 12 percent strength in the total population, and have become a useful political factor for electoral gain without taking a specific stand on Andhra Pradesh formation. Similarly, they could not take a clear stand on the Separate Telangana for a long time.
Therefore, they did not gain political power proportionate to their numbers and left it to the political parties they allied with. The Hyderabad Muslims identified themselves more from the ethnic or religious-political stand. But the village Muslims became part of the village society supporting the political parties along with the other villagers. Caste and class identities made Hindu lower castes to play political roles. Muslims particularly in urban conglomeration did not develop perspectives of political democracy rather learnt to join up the party in power.

Despite the Nizam getting into the process of integration into the Indian Union, the Hyderabad Muslims did not understand the process. It was not the liberation from Muslim rule. In fact, as per Sardar Patel, it was integration to democratize the State abolishing feudal forms of domination on land ownership and administration. The Secretary in the Ministry of States V. P. Menon supervising the process of changeover has written a book The Story of Integration of Indian States. Thus, Hyderabad was moved into the Nehruvian Democracy but not for “People’s Democracy” nor Peasant State the Communist parties desired. There were no foundations of the Hindu Raj either.

One shall not see integration from the diverse political angels. We have to construct it from the perspective of what had happened during the early days of integration.