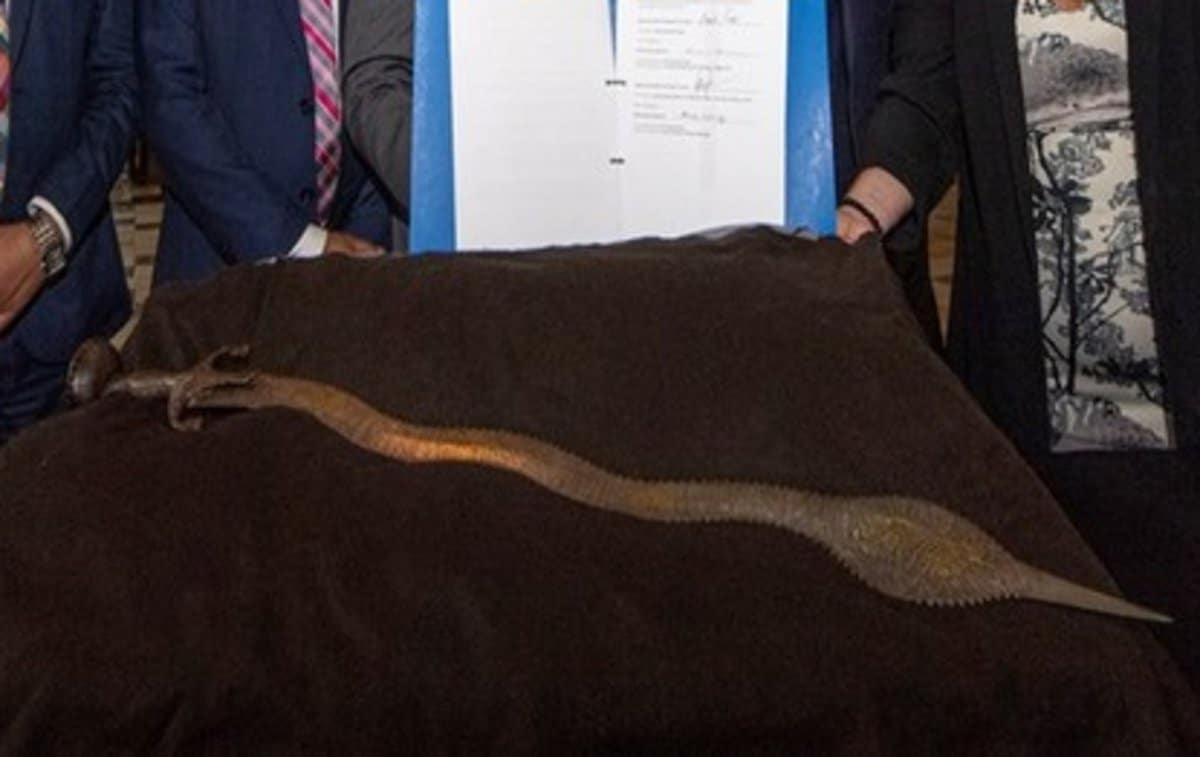 The ‘Serpent-Sword” of Nizams of Hyderabad which is brought to Delhi early this month will be made ready for public view at the famous Salar Jung Museum.

The High Commission of India in the UK and the United Kingdom’s Glasgow Life which manages Glasgow’s museums have signed an agreement during a formal ceremony at the Kelvingrove Art Gallery and Museum after which India got possession of the unique sword of Nizam of Hyderabad.

The ceremonial sword is of Indo-Persian design and is shaped like a snake and has serrated edges and a damascene pattern, with gold etchings of an elephant and tiger that is dated circa 1350 CE.

“The sword went missing some time in the rule of Nizam VI,” Mir Mahbub Ali Khan, said INTACH co-convener, P. Anuradha Reddy. Her guess is Sir Archibald Hunter who was the General Officer Commanding of the Southern Army in 1907 may have been presented this sword by the rules of Hyderabad and that’s how it traveled with him to Europe.”

While the government’s position is that such artifacts are stolen objects, India’s acquisition document for the sword says it was purchased from Maharaja Kishen Pershad.

According to the Glasgow museum documentation, “the sword was “exhibited by Mahbub Ali Khan, Asaf Jah VI, Nizam of Hyderabad (1896-1911) at the Imperial Durbar held in Delhi in 1903 for a ceremonial reception to commemorate the coronation of King Edward VII and Queen Alexandra as Emperor and Empress of India.”

How this ceremonial sword exhibited by Nizam Osman Ali Khan was later taken by his Prime Minster Maharaja Kishen Pershad remains a mystery. It is generally guessed that Maharaja might have gifted the sword to the General Commanding Officer of the Southern Army, Sir Archibald Hunter.

“The Salar Jung Museum in Hyderabad is the perfect repository for the sword as this artifact is from this region,” says SJM director A. Nagender Reddy. It is unknown whether the Serpent-Sword of Nizam of Hyderabad will be displayed there.

Ceremonial swords such as this symbolized power and military prowess of the Princely State of Hyderabad. It also signified the presence of a ruler if it’s being placed on the throne. It’s also used in the royal wedding ceremony, by making its presence felt in the absence of the groom’ to solemnize the ‘Nikah’ ceremony in the ladies’ chamber, said historian Sajjad Shahid, a Hyderabad-based historian of architecture, conservator, and columnist.

“This sword follows the Mughal tradition of encrusted-edged weapons, although the form of the hilt is strongly influenced by the Persian swords makes. The manufacture and design are typical of Hyderabad Princely state, where lavishly decorated swords were popular till the late nineteenth century,’ he added.