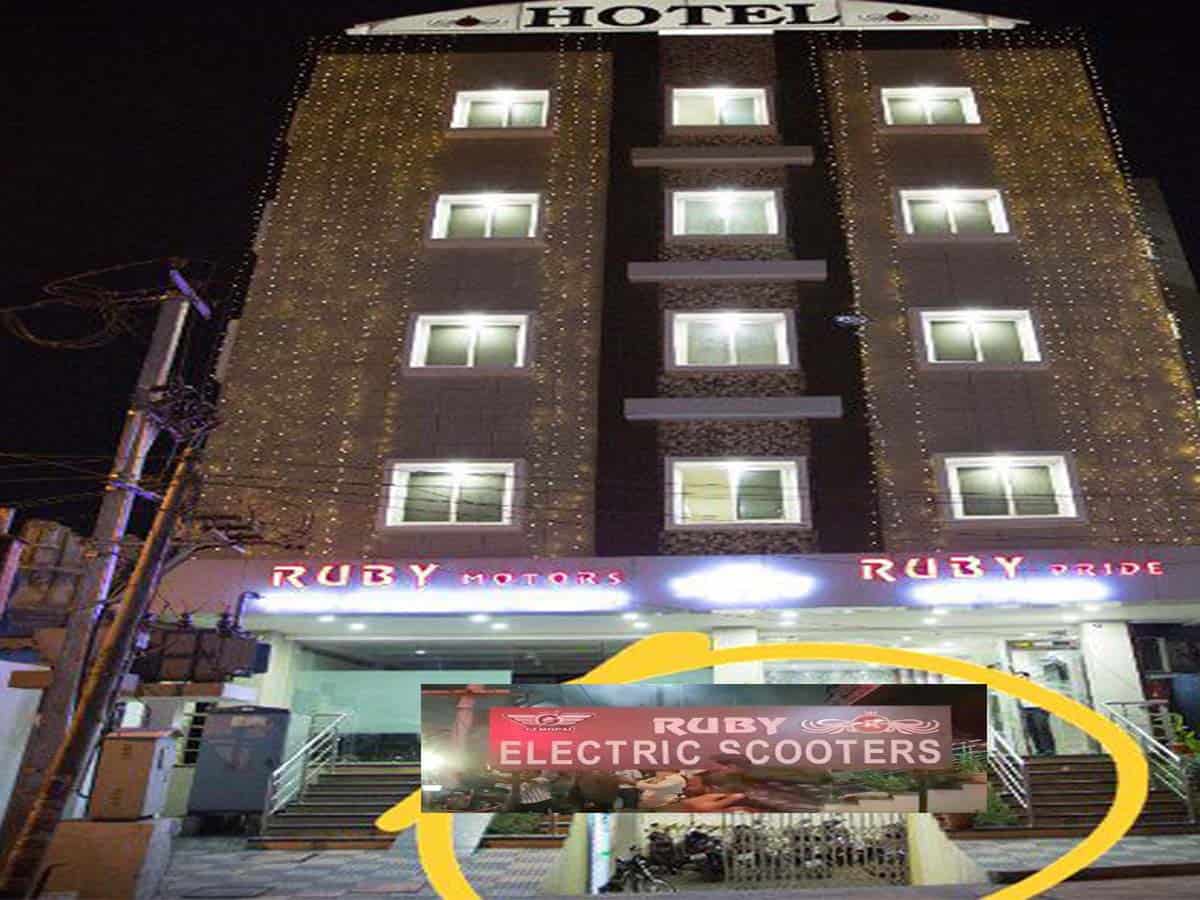 Hyderabad: The Telangana State Disaster Response and Fire Services Department, informed that it received a distress call on Monday at 9.37 p.m of a fire at Gemopai Electric Scooters and Ruby Pride Luxury Hotel, Secunderabad.

After receiving the call, initially, a Multi-Purpose Tender and Bronto Sky Lift arrived at the spot within five minutes and six vehicles equipped with smoke exhausts started for the spot.

The fire department saved the lives of 17 persons including 11 persons who were injured. Enquiries revealed that the fire broke out following an explosion of electrical batteries at an e-bike showroom located on the ground floor of the building.

There were 25 occupants in the hotel when a blaze engulfed the building. It was suspected that either an e-bike or a generator placed in the motor showroom exploded leading to the fire.

The Ruby Hotel and Gemopai electric scooters were owned by Rajender Singh Bugga, Sumeet Singh and brothers, who were illegally running the electrical scooters in the cellar of the building.

The fire department fighters faced several problems in their attempts to douse the fire, including zero visibility due to the thick smoke. The building had only a single staircase for escape and an alternate stairway was not provided.

The fire fighting equipment was installed but failed to work owing to the grave conditons.

The fire crew entered the building from the top wearing personal protection equipment and controlled the fire.

The department informed that fire fighting equipment installed in the building was not in working condition and no proper ventilation was provided forcing the fire department to make several vents for the elimination of the smoke.

The staircase was provided around the lift which the department deemed as dangerous.

“There was no emergency lighting and no smoke management,” Regional Fire Officer, V Papaiah said in a press release.

The cause of the fire is under investigation and property loss is under assessment.

Fire breaks out in e-bike showroom in Secunderabad:

The fire accident took place at Ruby Hotel near Passport Office, Secunderabad late on Monday night, which claimed 8 lives. The police released a list of deceased and injured here on Tuesday.

According to primary investigations, the police said that the explosion is suspected to be either from an e-bike or a generator placed in the showroom.

The building comprises five floors with 28 rooms. At the time of the accident, there were around 25 occupants in the hotel.

“Since there was no proper ventilation, the smoke filled the lobbies of the hotel upstairs and those staying in rooms with doors closed apparently did not know anything till the smoke engulfed the entire building,” Assistant Commissioner of Police B. Ramesh said.

Police release mentioned that the Ruby Hotel and the e-bike showroom were being illegally run by Rajender Singh Bugga, Sumeet Singh and brothers and they have been booked for culpable homicide.

“They have been illegally running the electrical scooters for about a year now,” the release stated.

While eight persons, including a woman, perished in the incident with one of the bodies yet to be identified, ten sustained injuries. The remaining escaped through the fifth floor.