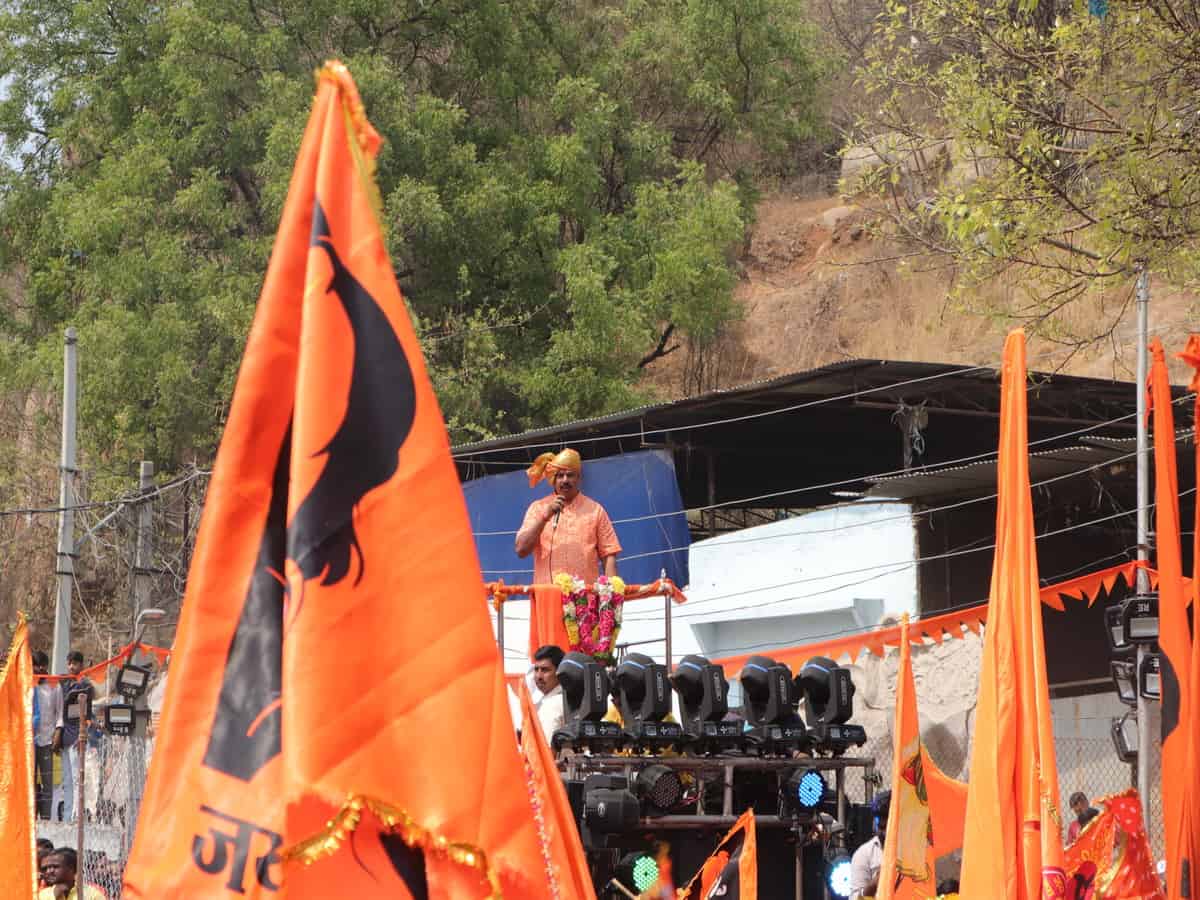 Hyderabad: Days after the Bharatiya Janata Party (BJP) suspended him in the backdrop of his derogatory comments against Prophet Mohammed, Hindutva leader and Goshamahal MLA T Raja Singh has found support from a new group here – the Sriram Yuva Sena.

The organization was unheard of until now. A few days ago, it called for and enforced a bandh in Goshamahal in support of Raja Singh.

According to police and intelligence officials, the Sriram Yuva Sena was floated by Raja Singh long ago to reinforce his identity as a Hindutva leader at the national level. It was also built to increase the MLA’s fan following in the country.

Singh was arrested last month after he created a storm with his derogatory comments on Prophet Muhammad. He did it in retaliation against the state government allowing comedian Munawar Faruqui to hold a show in Hyderabad at Madhapur on August 20. The whole controversy has turned into something of a blessing in disguise for him.

From Faruqui’s show to Raja Singh’s arrest: What unfolded in Hyderabad

Sriram Yuva Sena was created by Raja Singh, said sources, with the aim of countering religious conversion and preventing cow smuggling or slaughter. The organization remained confined mostly on paper with Raja Singh enjoying his political affiliations with Telugu Desam Party (2009 – 2013) and later with the Bhartiya Janata Party (2014 onwards) and winning an MLA seat for two consecutive terms.

The ‘never-ever heard’ group, except in intelligence circles of the erstwhile Andhra Pradesh police and now Telangana police will take centre stage until the Bharatiya Janata Party (BJP) top leadership revokes the suspension and offers something big.

Sources in the Sriram Yuva Sena said that the group is composed mainly of gau-rakshaks and has a presence in Uttar Pradesh, Jharkhand, Maharashtra, Delhi and Karnataka. “After coming out of jail more efforts will go to strengthen the group in all the states. The objective is to have a huge pool of volunteers who can fight for the protection of ‘Dharma’,” he revealed.

Raja Singh, who extensively used ‘Dharma’ (religion) for his rise was undeterred when the BJP party suspended him for placing it in a humiliating position, just months after the suspension of a BJP spokesperson, Nupur Sharma, over similar remarks against the Prophet, that received international condemnation.

“After thoughtful discussions, the legislator and his supporters decided that the Sriram Yuva Sena will be an ideal organization. The name of Lord Ram will attract masses and the youth into the fold of the organization that the supporters of Raja Singh now want to heavily rely upon for future actions,” said an intelligence official.

Uttar Pradesh chief minister, Yogi Adiyanath, had himself floated a saffron group Hindu Yuva Vahini, years before coming into politics. During his days as the Member of Parliament from Gorakhpur, the organization expanded fully under his patronage. “Raja Singh is emulating the same model here, now he feels the time is favourable for him,” the official added.

The support Raja Singh garnered among the youth of Hyderabad can be seen in his massive rallies during Hanuman Jayanti and Sri Rama Navami.

Thakur Raja Singh Lodh was born in Dhoolpet, Hyderabad and since childhood associated with Hindu organisations in his locality. He was associated with the RSS and Bajrang Dal before taking the political plunge by winning as corporator in the Hyderabad municipal corporation from N Chandrababu Naidu’s Telugu Desam Party (TDP).

Even in TDP, he actively participated and encouraged Hindu activism in Hyderabad. In fact, some Hindu monks had crowned Raja Singh as Hindu Hrudaya Samrat in January 2013, when the controversial leader was yet to join BJP.

His uncompromising Hindutva stand, helped him emerge as the favourite in his constituency and the sole MLA for the BJP in the 2018 assembly election when the BJP lost deposits in over 100 assembly segments among 119 constituencies in Telangana.

Raja Singh has also used social media to his advantage, with a popular YouTube channel and an army of volunteers supporting him. His Youtube channel ‘Shree Ram Channel Telangana’ has 3.7 lakh subscribers.

His regular videos on the YouTube channel will soon acquire more supporters. The Sriram Yuva Sena is expected to sooner or later take up membership drives to increase the number of members.