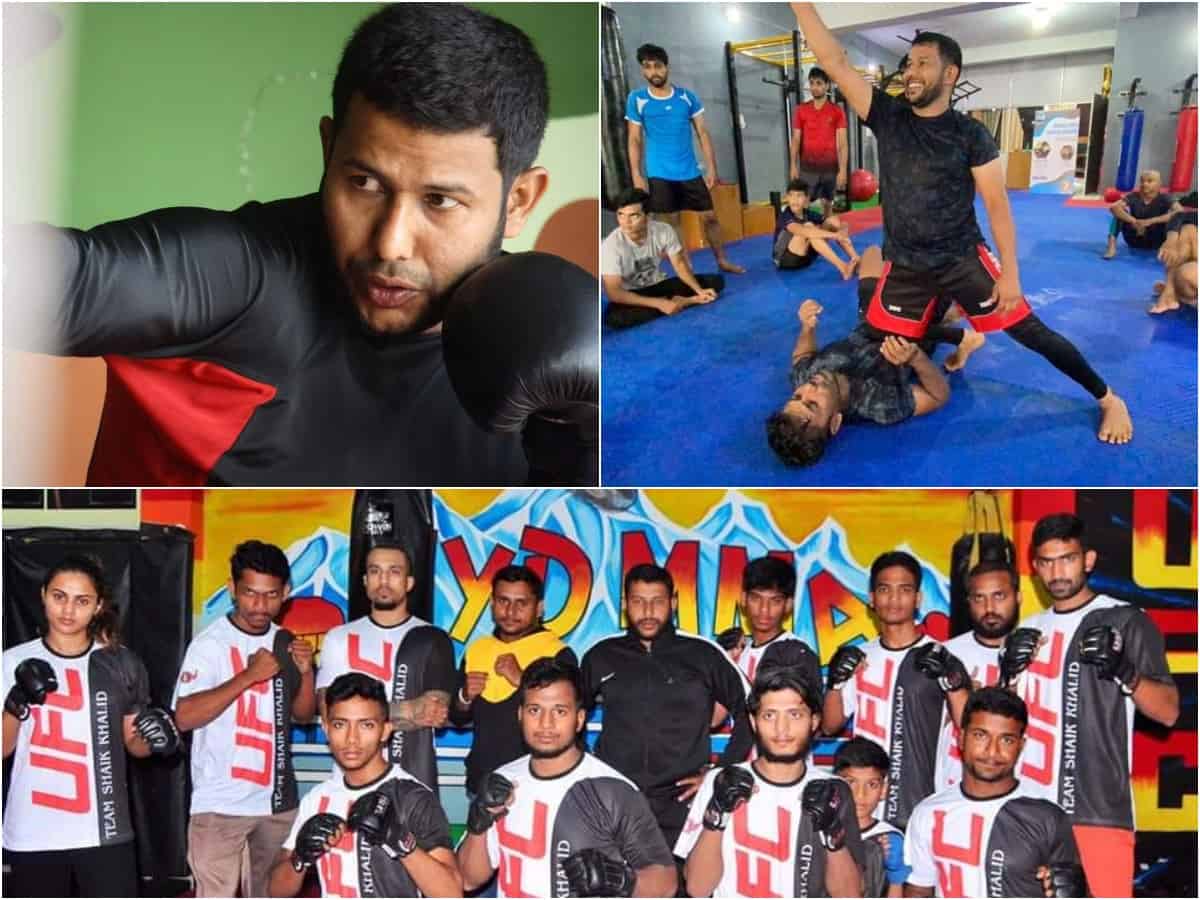 Hyderabad: Popularising a bloodsport in which combatants knock each other’s teeth out while blood decorates their bodies is no easy task. That too, when someone tries to further introduce it in a conservative country whose official religion is cricket. However, nothing could deter Shiak Khalid from making Hyderabad the centre of MMA (Mixed Martial Arts).

Since its inception almost 30 years ago via the American MMA promotion company Ultimate Fighting Championship, the sport has been at the end of severe criticism for its bloody bone-breaking “human cockfights,” nevertheless has managed to become the fastest-growing sport which continues to evolve. It is a full-contact combat sport that involves striking and grappling. The most popular platforms for MMA are UFC and One Championship.

The Super Fight League of 2013 was a turning point for MMA in Hyderabad as four students of Shaik Khalid, Bilal, Ghouse, Kurshid and Amer were contenders in the big league and made the news. In the same year, Shaik Khalid’s gym at Chaderghat, ‘Hyderabad Muay Thai club’ was transformed to ‘Hyderabad MMA Gym.’

When the bifurcation of Andhra Pradesh and Telangana happened in 2014, it was the right time for the veteran Martial artist to establish the Telangana Association of Mixed Martial Arts (TAMMA) and officially lay the foundation of the sport in the city of Nawabs.

“Ever since MMA started gaining popularity a decade ago, different coaches of Karate, Muay Thai and Kung Fu started using the name of the sport to promote their own clubs and traditional martial arts, and never taught desperate disciples the real MMA,” Khalid remarked. He added that they had students who said they spend years learning so-called ‘MMA’ and when we asked them to demonstrate something, all they did was display one type of martial art. They had no idea about the complexities of MMA.

From 2013 till 2021, after his club took off, Shaik Khalid created about 50 national level medalists and five international level medalists including his prodigy Mohammed Mahboob Khan who coming from humble beginnings went on to become the first-ever and only Indian to become a world champion in the sport. Khurshid Mohiuddin, another student of Shaik Khalid, is now an MMA trainer at an official UFC gym in Chicago, USA.

Mahboob Khan used to be a bodybuilder who worked in a clothing shop and used to drive a taxi. He told Siasat.com that in 2016 his friend introduced him to Khalid and they subsequently went to watch a state championship. “I got interested in the sport and joined… I never thought I would participate in tournaments but as we trained I gained more confidence and later…sir made me play nationals,” he said.

There was a point when Mahboob said he was not getting enough time to train, and as Shaik Khalid saw potential in him, he asked him if Mahboob would quit his jobs and stay with him. “He also offered to give me salary,” Mahboob said. He now has three straw-weight and four flyweight National gold medals, one international gold medal and has been the five-time fight-night(semi-pro) champion.

Shaik Khalid started wrestling in 2000, learn karate in 2002, mastered and participated in Muay Thai and full-contact Kickboxing by 2006. Furthermore, he said, “When MMA started growing in India, we were able to invite foreign coaches to the club to teach us MMA… our students also learned a lot as they participated in big competitions.”

As of now, Shaik Khalid who is now the team India coach said that Hyderabad is leading the way in MMA for the whole country as TAMMA organizes four to five national and state-level events per year. His gym now has four branches in Chaderghat, Malakpet, Tarnaka and A S Rao Nagar. He has trained about 2000 fighters.

Now, fighters from all around the country who wish to have a professional career in MMA are swarming to Hyderabad to train under Shaik Khalid. His journey has inspired many to pursue a full time career in MMA.

Martial Arts legend Bruce Lee is known as the father of MMA as he was the first one to combine multiple martial arts and make a unique fighting style out of it. MMA mainly involves boxing, Muay Thai, wrestling and Brazilian Jujutsu. The following are the only rules of MMA:

The greatest MMA champion of all time is Khabib Nurmagomedov from Dagestan, Russia who holds an undefeated record of 29 professional wins in 29 matches.

MMA has been criticised for being too violent. However, fans and fighters alike have defended the sport and said that it instils multiple skills in a practitioner, gives a broader perspective of life and is one’s own way to express oneself. Dana White, the owner of UFC said that boxing and American football have more chances of causing brain damage and ending one’s life than MMA.