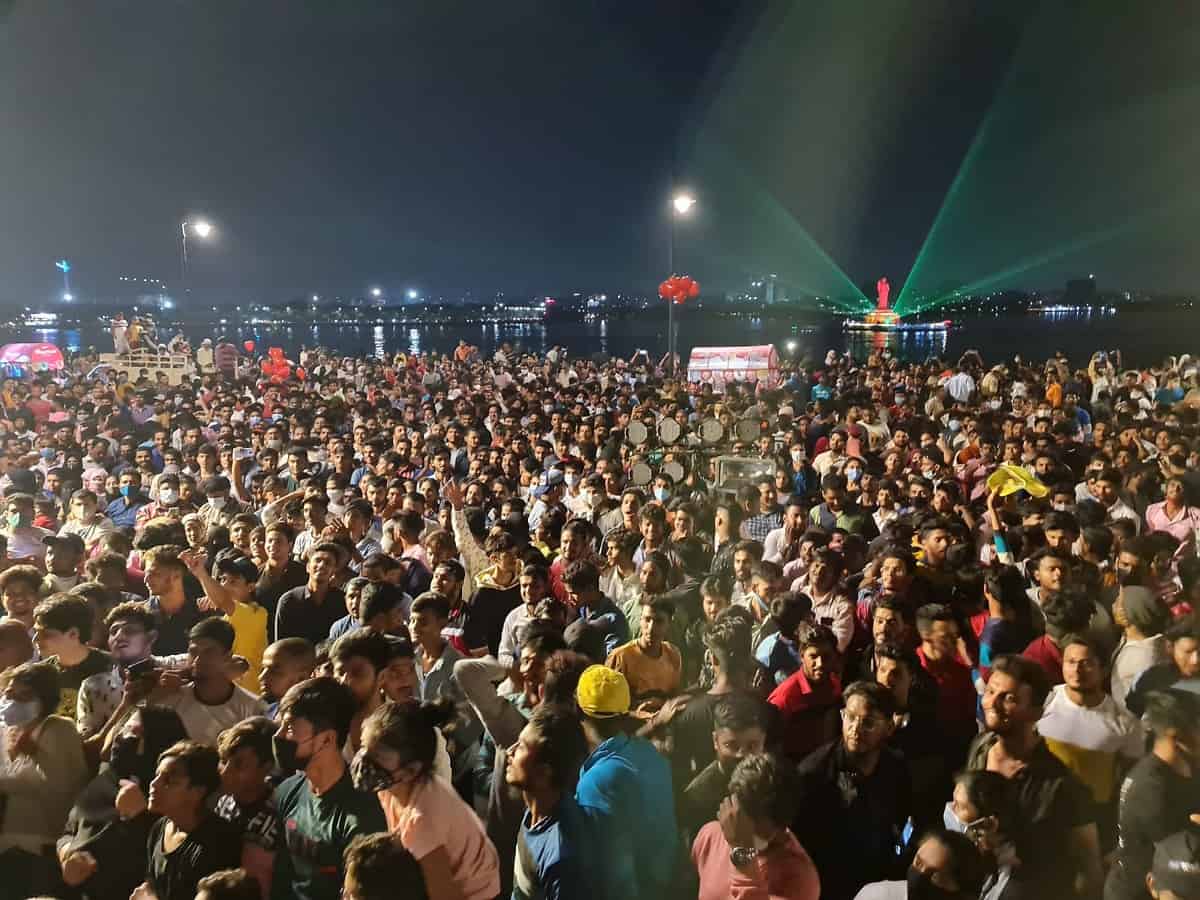 Hyderabad: Hundreds of people from the city had indeed had a ‘Sunday Funday’ yesterday at Tank Bund, as several attractions and programmes were held on the major arterial road. People watched and regaled in activities such as the performances by the Telangana State Police Band, orchestra – Telugu songs, Oggu Dolu, Gussadi & Bonalu Kolatam and fireworks.

Many even came just to hang out at the eateries by the historic lake, and even collected free plant saplings that were being given by the HMDA. The Tank Bund road was bursting as its seams on Sunday evening as the road was full of crowds for its weekly quota of ‘Funday’, a concept that the state government had come up with.

The Municipal Administration Department’s ‘Sunday Funday’ concept was back yesterday from 3 p.m. to 10 p.m. ( September 26), after a gap of one week owing to immersions, as last Sunday the eve of Vinayaka Chaturthi in and around the Hussain Sagar.

In a series of tweets on Sunday, Municipal Administration and Urban Development special chief secretary Arvind Kumar took to Twitter and said the ‘Sunday-Funday’ pedestrian eve was in full swing.

In another tweet, he shared a firework video and wrote, “#TankBund Sunday-Funday.. Three rounds of firework.. Kids couldn’t have asked for more,”Kumar tweets.

Couple’s were seen enjoying the traffic free Tank Bund to capture the beautiful view of the water and surroundings or spending time on the green lawns or open spaces on the other side of the road. Children were also seen playing around, cycling or skating.

The women’s safety wing of Hyderabad police added the fun to the evening with a zumba session followed by an interactive awareness program about She Teams’ functioning.

Additional director general of women safety wing, Swati Lakra tweeted and wrote, “#SundayFunday at #TankBund Women Safety Wing Corner was a great hit with people from all age groups.Thank you for your active participation.”

One of the twitter user Faazel Dastani shared a video of vehicles arrangement and wrote,”@KTRTRS Great initiative and amazing response however vehicles weren’t supposed to be allowed during 5pm to 10pm,there is major traffic right now while I am making this video, we parked our vehicle 1 kms away from tankbund , njoyed the initiative with my 9 year old. #sundayfunday.”

The Sunday to be ‘Funday’ concept was implemented on August 29 this year in the city for the first time, for which Tank Bund was shut for traffic from 5 pm until 10 pm. For citizens to enjoy the beauty of the newly renovated Tank Bund and keeping the safety of citizens in mind, Telangana minister for municipal administration and urban development K. T. Rama Rao had suggested traffic-free Sundays on the Tank Bund Road for five-hours.

This initiative received a massive response with Hyderabadis thronging the place with their families, clicking photos and spending time in leisure on the bank of the picturesque Hussain Sagar lake.