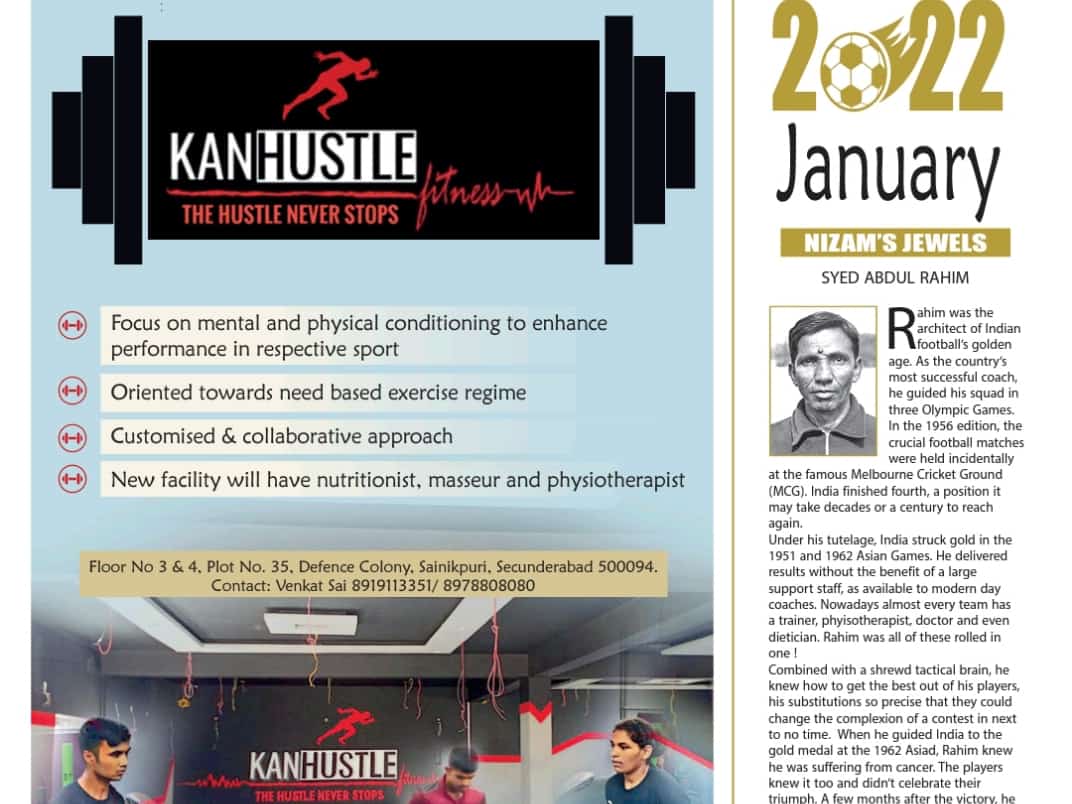 Hyderabad: Nearer home, the Sports Writers Association of Hyderabad’s (SWAT) 2022 calendar aims to encapsulate history of the ‘beautiful game’ in its heyday. No less than half a dozen footballers from the Twin Cities have captained the Indian team. The portraits are penned by The Hindu’s former Deputy Editor Abhijit Sen Gupta and the series is named the ‘Nizam’s jewels.’

The 14 Olympians who graced the quadrennial games from London (1948) to Rome (1960) quite understandably enjoy pride of place in its pages. They are followed by some of the 21 illustrious internationals who put their best foot forward for city, club and country.

If it takes a spark to start a fire, the calendar kicks off with the man who made all these Herculean feats possible. One deed spoke more than a thousand words for coach Syed Abdul Rahim and he was the ninth member of the Indian team from Hyderabad in the 1956 Melbourne Olympics. His footballing acumen came in for acclaim from leading lights such as former FIFA President Sir Stanley Rous himself.

Some profiles are no bigger than thumbnail sketches due to the paucity of available material. The football establishment in the 1950s and 60s showed no great foresight in recording the accomplishments of its players for posterity. Making matters worse was the poor marketing skills of these men who were mostly employed with the Hyderabad City Police as constables.

After his entire working life was spent with the force, Noor Mohammed retired as an inspector. The lean and wiry double Olympian died in penury of tuberculosis in Osmanpura ! As late football historian Novy Kapadia noted, some of these who had travelled the world, couldn’t even afford local bus fare. So did Helsinki and Melbourne Olympics war horse Salaam share that others would stitch their torn football boots themselves, simply to save on cobbler costs.

On many occasions, these valiant men from Hyderabad, during major tournaments in other cities, would carry their own provisions. They would cook in their rooms, as eating out was a luxury they could ill afford. Legend has it that the proprietor of a now famous Delhi restaurant picked up recipes of many non-vegetarian delights from these simple souls.

A shade of sepia in the photographs, some of them over half a century old, give the calendar a ‘classic’ feel, like a Sergio Leone sphagetti western movie. The dates of each month have a sketch of the Jules Rimet Trophy as background. And rightly so, since this is the year of the 2022 FIFA World Cup in Qatar.

Former Indian captain Victor Amalraj describes the calendar as ‘one of its kind.’ It has been SWAT’s endeavour to turn the spotlight on these selfless sons of the soil and toil. Most of them have long departed for the Elysian Fields, having lived without reward or recognition, unsung and even unknown, sometimes in their own native land. Some received the Arjuna award, which in those days carried nothing more than the mythological archer’s statuette.

Public memory is short, more so in sport. Hyderabad is quick to celebrate achievements in the present. Performances from the past need praise too, lest yesteryear legends be forgotten by future generations. For those who wish to spread the word and foster memories of Hyderabad football’s golden age, bulk purchase queries/orders may be mailed to [email protected]

(A. Joseph Antony was on Sony TV’s commentary panel for the 2018 FIFA World Cup, Euro 2020, Copa America 2021 and Tokyo Olympics 2020. The author of ‘My way—The biography of M.L. Jaisimha’ (Apple Books, Amazon), he was a Senior Assistant Editor with The Hindu in Hyderabad.)