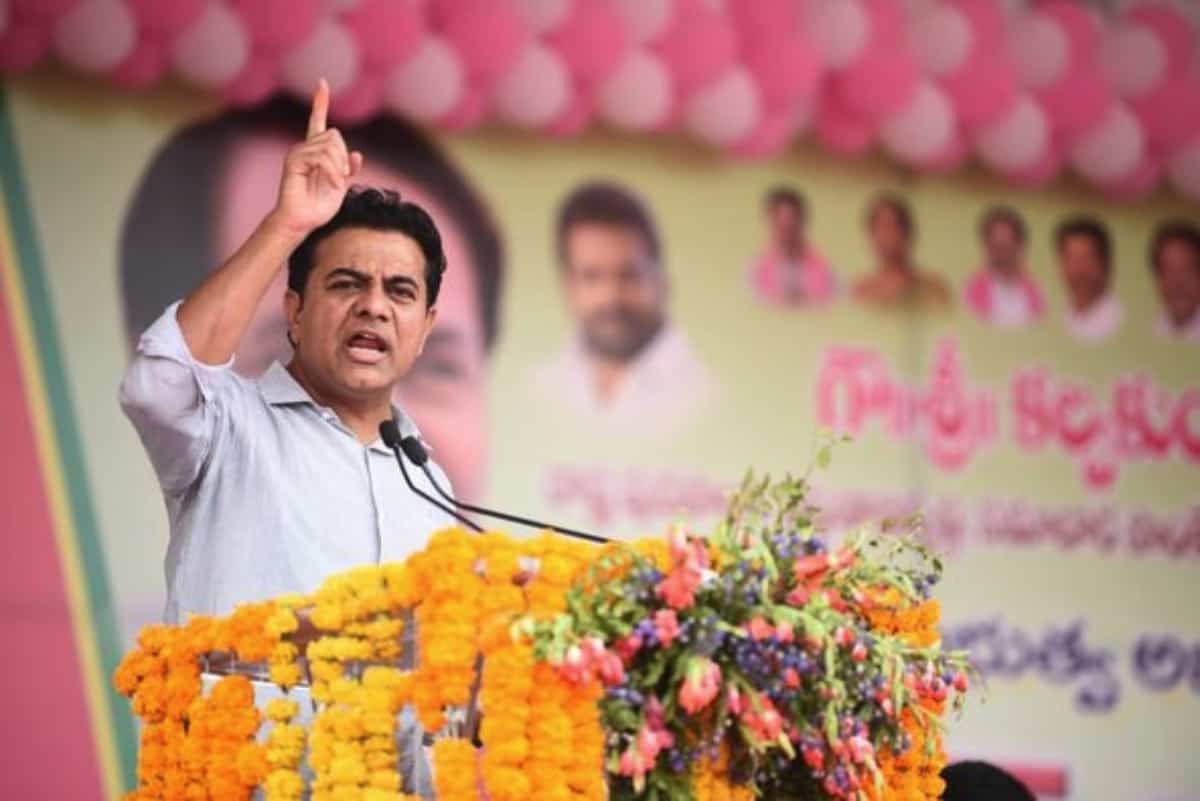 In an open letter to home minister Amit Shah, who is due to visit Telangana on Saturday, TRS working president and IT minister KT Rama Rao slammed the BJP for its treatment of Telangana and demanded answers to a list of issues.

While stating that the BJP has been spitting venom on the state for the past eight years, KTR said that the BJP national leaders only tour the state once in a while in an attempt to spread hatred amongst the people.

He added that BJP did not fulfil a single promise made to Telangana but fulfilled every requirement of states like Gujarat, on a war footing.

The minister also stated that the BJP always insulted the Telangana movement. “We will fight for the rights of the people of Telangana and demand our rightful share under the AP Reorganization Act,” he said.

KTR also stated that the people of Telangana know the true colors of the BJP which has not done any good to Telangana nor will change its stand in the future.

KTR warned the BJP about their “stepmother’s attitude” towards Telangana and also stated that people here will give a befitting reply to these unfaithful leaders.

KTR demanded answers to the questions mentioned below:

KTR demanded that the BJP should reveal which of the many promises made under AP Reorganization Act to Telangana were fulfilled by them.

“Is it not true that BJP leaders looked away when TRS leaders demanded the establishment of a Rail Coach Factory in Kazipet?” questioned the state IT minister.

However, the BJP government at the Center has allocated a rail coach factory to Gujarat for Rs 20 Crore.

“When you can allot a rail coach factory to Gujarat, why not for Telangana? Why this partiality towards Telangana?” questioned KTR.

KTR then demanded that the BJP-led center name at least one central educational institution allocated to Telangana by the NDA government.

“Not a single medical college was allocated to Telangana under the NDA government lakhs of students in Telangana are unable to pursue medical courses,” he stated.

“Does this not affect Prime Minister Modi, who earlier responded to the injustice done to a medical student during the admission process in Gujarat?” questioned the minister.

The minister also questioned the BJP-led central government as to why the Bayyaram Steel Plant was not allocated to Telangana despite promising the same in AP Reorganization Act.

“Telangana has been the top investment destination for global firms. Yet, Telangana is not being given any industrial incentives. Why? Do you have an answer for it?” asked KTR.

KTR alleged that scrapping the ITIR project in Telangana and denying the city’s rapid development in the IT sector shows how BJP conspires against Telangana.

“After rejecting ITIR status to Telangana, can you name at least one program introduced by the BJP as an alternative option for the development of the IT sector?” questioned KTR.

What answers do you have for the youth of Telangana who lost opportunities in IT companies due to the rejection of ITIR?

Why are you not allocating new Software Technology Parks to Telangana whose IT sector is progressing at a rapid speed?

While reminding that the Late Smt. Sushma Swaraj had made an election promise in 2014 to award a national status to the Palamuru Rangareddy lift irrigation project KTR questioned why, even after eight years of governance, the promise remained unfulfilled.

While alleging that the BJP was partial toward Telangana farmers, KTR said that they are answerable to the farmers of Palamuru and Rangareddy Districts who feel cheated after Karnataka’s Upper Bhadra project was awarded a national status however Telangana’s project was robbed of its.

Can you mention the number of funds allocated to Telangana in the past eight years, keeping aside the funds which the state receives constitutionally?

What do you want to say about ignoring the suggestions of NITI Aayog on allocating Rs 24,000 crores for projects such as Mission Kakatiya and Mission Bhagiratha in Telangana?

Isn’t it the fact that you are troubling the citizens of Hyderabad by becoming a hurdle in the construction of skyways by not allocating defence lands to the state government?

“BJP government did not even release one rupee to the State Govt when Hyderabad saw major floods but allocated thousands of crores of rupees to Gujrat during similar floods,” the minister alleged.

Why aren’t you extending financial support to Hyderabad Pharma City?

Why no Defense Industrial Corridor to Telangana? Why move it to a State which has zero presence of defense factories, while Telangana houses major Aerospace and defense companies.

Not a single Mega power loom textile cluster was allocated to Telangana, despite Telangana leading the way for others in the textile sector. Any answers?

Why are you creating hurdles in paddy produced by farmers of Telangana?

Why didn’t the BJP Govt allocate Turmeric Board to Nizamabad? Why did the BJP MP completely forget the promise made to the people of Nizamabad, even after writing it on a bond paper during the 2019 election?

CM KCR demanded the abolition of cess on petrol prices and reducing the prices. Will you make a statement on this during your visit to Telangana?

Union Minister Kishan Reddy stated that the World Health Organization’s Traditional Medicine Center would be set up in Hyderabad. But it was moved to Gujarat. Why such discrimination towards Telangana?

Instead of supporting the newly set up International arbitration center in Hyderabad, you have set up another center in Gujarat. What are your comments on it?