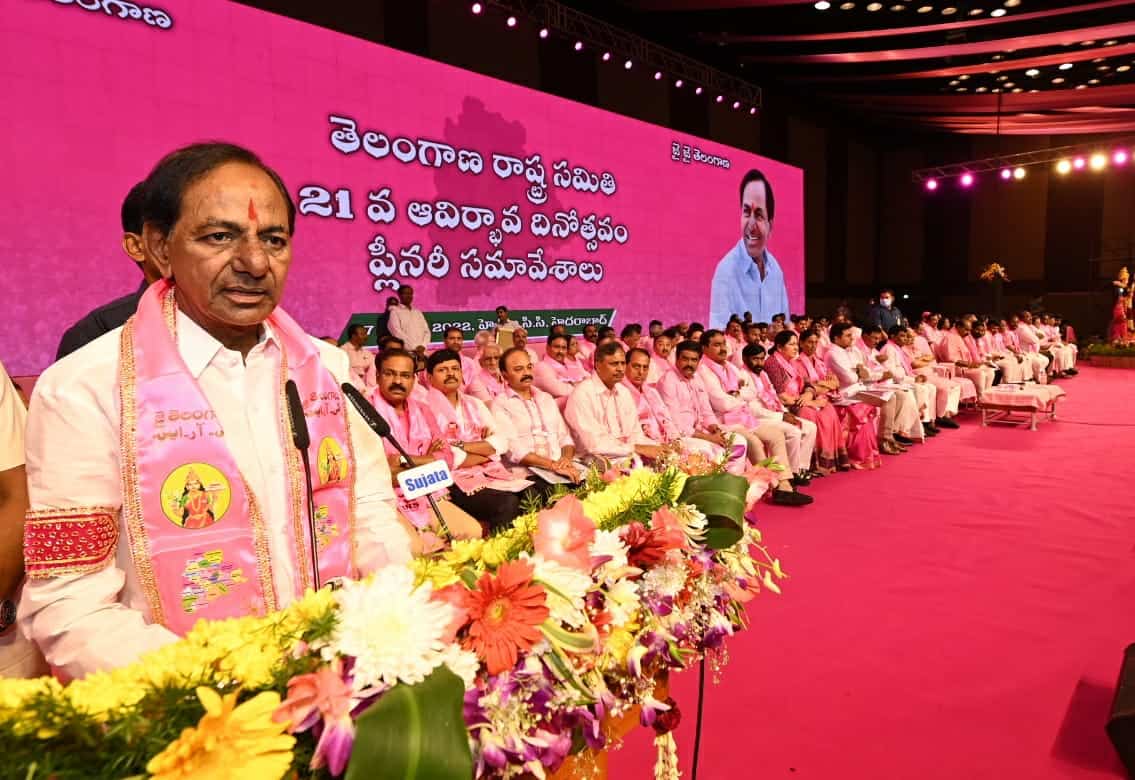 TRS senior leader Keshav Rao delivered the welcome address. He hailed the TRS Supremo for leading Telangana towards higher growth after its formation.

TRS chief KCR addressed the audience for nearly 90 minutes in his inaugural speech. He touched upon political and development issues.

The TRS party extended gratitude to the Telangana government for procuring paddy in the current season after the Union government turned down the state plea to purchase paddy directly from farmers.

The party criticised the Union Government for its failure in resolving the paddy procurement issue amicably. They alleged that the centre adopted “anti-farmer policies”, which include reducing subsidy in fertilizers and putting heavy burden on farmers. They said that increase of petrol and diesel prices also mounted the input cost of the farming. The party resolved it will not compromise on farmers issues.

The ruling TRS has adopted a resolution that the party will play a key role in national politics in the coming days.

The party observed that TRS needs to play a constructive role and fill the political void at national level. The party asserted to bring a quality change in the country on the lines the Telangana state achieved desirable results in education, irrigation, health and economic sectors. “The country should be freed from the evil forces and end the Bulldozer rule and divide and rule policies adopted by the rulers in the country,” they stated.

The party felt that the Atma Nirbhar Bharat programme launched by the Bharatiya Janata Party (BJP) led union Government did not bring any change in the lives of people. Instead, the government has turned India into “Durbhar (Worse) Bharat”.

The TRS has demanded the Union Government to reduce spiraling prices of essential commodities and took strong exception to the centre’s indifference towards solving price hike issue.

They said that the “false economic policies” adopted by Prime Minister Narendra Modi put heavy burden on common man and the middle classes are struggling due to the price burden. Despite the crude oil prices going down, the centre was increasing fuel prices indiscriminately, they stated. The party resolved to expose the centre’s failure in the control of prices.

The TRS party demanded the union government to adopt a bill extending 33% reservation for women in the Parliament.

They stated that TRS already adopted a resolution in support of women reservation in the legislative bodies in the state assembly, and has sent it to the centre for consideration. “The TS Government is already implementing 50 per cent reservation in local bodies for women,” they said. TRS criticised the BJP led union Government, saying that it is not sincere in women empowerment.

The TRS called on people to fight unitedly against the barbaric acts by some political forces and spread the message of love and peace.

The ruling party demanded the union government to constitute Backward Classes (BC) welfare ministry and also take up BC census in the country.

The Telangana state has conducted “Samagra kutumba survey” and the data was being used to reach the benefit of the welfare programs to the deserved. The TRS leadership said that the plights of BCs will not be resolved unless the BC census are conducted.

The ruling TRS of Telangana state has demanded the union government to enhance quota to the deserved communities in education and employment based on their social conditions.

The TRS was demanding to increase quota for Muslims to 12% from 4% in proportion of the population. They also said that the Scheduled Tribe (ST) reservation should also be increased to 10 per cent. The party stated that the state government adopted resolutions in support of quota hike and sent the same to the centre for approval in April 2017, but the union Government has not been responding on the issues since years.

The Telangana Rastra Samithi demanded the union government to collect the taxes from divisive pool and stop the practice of tax collection through cess which dented state share from the tax revenue.

The TRS alleged that BJP led Union Government has adopted “weaker states-strong centre” approach to weaken the state financially. “The centre should pay 41% devolution to the states. But the union government is collecting taxes in the form of a cess so that the states will not insist on it. The states were meted out injustice in the devolution. The states could get only 29.6 % devolution due to the cess system in the tax collection,”

The TRS strongly condemned anti constitutional approach in the tax collection and devolution to the states.

The TRS has demanded the union Government to resolve the Telangana share in river Krishna water under section 3 of the river water dispute act and also to instruct the Brijesh Kumar tribunal to resolve the issue.

The ruling party alleged that centre was deliberately adopting delayed tactics in resolving water disputes after the bifurcation of Andhra Pradesh and was also creating hurdles in the completion of projects taken up on Krishna. “On the request of union government, the Telangana government withdrew petition in supreme court to resolve water sharing issue- but there is no progress,” they said. chief minister KCR apprised the Union Jal Shakti minister of the challenges facing by Telangana to address water challenges facing by the state.

The ruling TRS party resolved to fight against the union Government for undermining the federal spirit and suppressing constitutional rights which have been accorded to the states.

They stated that the constitution has given absolute powers to the states to bring legislations and also executive powers. With the idea that the centre was depriving states of its powers, the TRS demanded the centre to scrap new power acts and dam safety acts which are detrimental to the states. The one nation – one registration and one nation- one market policies are part of consolidating the powers of the centre and weaken the states, they alleged.

The party took serious note of the injustice meted out to Telangana in the sanction of educational institutions and other development schemes. The TRS leadership warned that the party will launch a struggle if the demands are not met soon.

The Telangana ruling party demanded the union government to implement Dalit Bandhu scheme, launched by Telangana Government, in the country. Under the scheme, each beneficiary from SC community is provided Rs 10 lakh financial assistance with 100% subsidy.

The party alleged that the centre did not introduce any scheme for Dalits exclusively, and the attacks on Dalits increased in the country.

The TRS has demanded the union Government to withdraw GST on handlooms and opposed the anti weavers policies adopted by the centre.

The centre imposed 5 per cent GST on handloom products. As a result, the weavers community are struggling to continue in the occupation, they said.

The plenary said that the Telangana government has brought into force slew of welfare schemes like waivers of loans, weavers saving scheme and group for shed programmes to strengthen the community economically. The resolution demanded the centre to save weavers from GST burden.