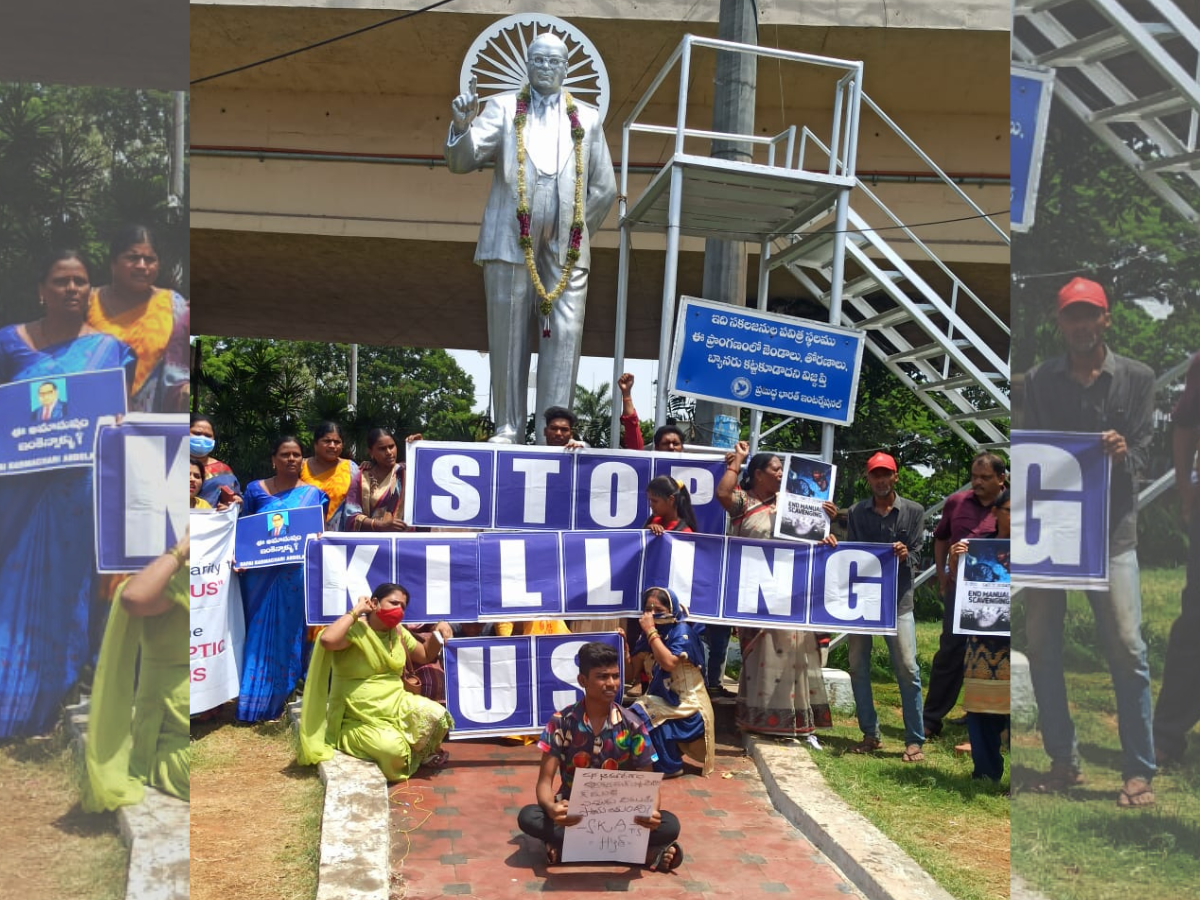 Hyderabad: From June 3 to 9, a group of widows whose husbands died due while manual scavenging carried out protests in the city, demanding an end to the social ill which took their husbands’ lives.

As the protesting women (widows of manual scavengers), devoid of hope, stood under the Ambedkar statue at Khairtabad, the lack of any response from the Telangana government made one thing clear.

The killings would not stop.

The Safai Karamchari Andolan has been carrying out a 75-day program to protest the cruelty of employing manual scavengers. While the caste-based indignity has been decriminalised, the practice continues thus ensuring that scheduled castes and tribes remain relegated to the lower strata.

In Telangana, the Stop Killing Us protests were carried out for a week. It has been nearly a month. Amidst rallies and processions, the government remains silent on the issue at hand.

On May 1, 2016, (ironically the day commemorating the struggles and gains made by workers and the labour movement), Bhagyalakshmi (31) and Mangamma (37), both residents of Koti in the city lost their husbands Bongu Veera Swamy and Chakali Kotaiah to manual scavenging. As Veera Swamy entered the sewer to clear out the collected waste, methane gas ensured that life slowly left his body.

Kotaiah, concerned for his friend’s well-being entered the sewer to check on Veer Swamy and was met with the same fate. Even their bodies weren’t retrieved from the sewer until much later. When the deceased were finally transported to Osmania Hospital, they were pronounced dead.

“Ae court ledu, memu tiragani jaaga ledu, mokani kaalu levu. Andari kaalu moktunaunnam (There is no court, no place we haven’t gone to, nobody who’s feet we haven’t begged at. We have just been begging)” remarks a teary-eyed Mangamma.

As Mangamma utters these words, her second daughter’s lower lip starts to quiver and she joins her mother in sobbing.

Bhagyalakshmi takes the ends of her floral-print sari to wipe her eyes as she remarks, “Koi saath nai dere (Nobody is helping us).”

The two women were also promised a government job and double bedroom housing aside from the compensation amount.

Both the women moved to Hyderabad from Nagarkurnool with their husbands to make a decent living. Even now, the similarities between the two are hard to miss. Both are in debt, struggling to provide for their children, living in a single small room in the parking garage of buildings.

The politics of manual scavenging

Manual scavenging is illegal under the Prohibition of Employment as Manual Scavengers and their Rehabilitation Act, 2013. A person can be punished with imprisonment upto one year or a fine of Rs 50,000 or both for hiring manual scavengers. For repeat offences, imprisonment could span two years or a fine, which may extend to Rs 1 lakh, or both.

Across Telangana, 17 families who lost their husbands and fathers to manual scavenging are yet to receive compensation. Hyderabad alone houses five such families. As per a Supreme Court judgement from 2014, bereaved families of scavengers are entitled to Rs 10 lakh compensation.

What proof is needed? KTR met the victims

Speaking to Siasat.com, K Saraswati, the head of Safai Karamchari Andolan’s Telangana chapter clarifies that while a lot of families did receive compensation, 17 families across the state suffered misfortune.

“In Bhagyalakshmi and Mangamma’s case, since there isn’t any clarity on who the contractor responsible for the husbands’ death was, compensation did not come through. However, that isn’t enough of a reason. The state IT minister KT Rama Rao came and met Bhagyalakshmi after her husband’s demise,” she added.

Saraswati also mentioned that aside from both the women, a third woman, Padma, a resident of Karmanghat also lost her husband to manual scavenging and has since taken to alcohol.

“Ilanti Telangana maaku avasaram ledu. Ee vishayam lo memu prabhutvani tappu padtamu (We don’t need such a Telangana. In this case, we do find fault with the state government),” she concluded.

(A video story of this report will be up on The Siasat Daily’s Youtube page by the end of this week.)