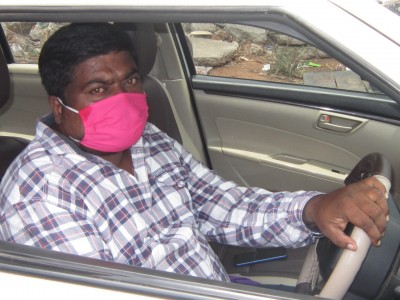 Hyderabad: The Telangana Gig and Platform Workers Union (TGPWU) here has asked the state governmentto act against private financiers and banks which are forcing out-of-work cab drivers to pay up in spite of the financial hardships they have been facing during the ongoing second COVID-19 wave.

The union’s demand comes some days after an Uber cab driver attempted suicide in the city.Kuppala Venkata, who has been an Uber driver for four years and completed three thousand rides, is right now struggling for his life. Unable to pay his debts, he attempted suicide last month on May 29.

“Because of the lockdown there was zero business going for him to pay the EMIs or monthly installments. In a desperate attempt to make sure that the banks don’t take away his vehicle, the only source of income for his family, he was forced to take a loan from private financers,” said Shaik Salauddin, state president of the TGPWU.

In Telangana, the COVID-19 lockdown was imposed from May 2, and citizens were only allowed to move around from 6 a.m. to 10 a.m. initially. This adversely impacted the lives of app-based drivers working for companies like Uber and Ola, Salauddin added.

Many drivers, due to lack of work during the Lockdown, are not able to pay their EMIs and had to take loans from private financers. These private financiers are infamous for their high interest rates and generally harass people when they fail to pay up. Kuppala Venkat was one such victim.

“Soon afterwards, loan recovery agents of the private financers started harassing Kuppala Venkata. They allegedly threatened and bullied the victim, and mentally tortured him which pushed him to take the decision to end his life.
He attempted suicide on May 29 and right now he is struggling between life and death as his family is desperately trying everything to save him,” Salauddin told Siasat.com.

The president of the Telangana Gig and Platform Workers Union urged Uber to help Kuppala Venkata and his family. He also urged the Telangana government to act against the private financiers and the bank, whose actions forced Kuppala Venkatesh to take such a step.

“Taxes, fuel prices, penalties and toll have continued to increase the operating costs, but business has remained subdued due to weak demand. About 50% of the vehicles of app-based drivers and delivery workers are still off the road and once the current moratorium period is over there would be a spurt in NPAs. As a result app-based drivers and delivery workers are not earning anything significant and are unable to pay their EMIs or load instalments.” Salauddin told Siasat.com.