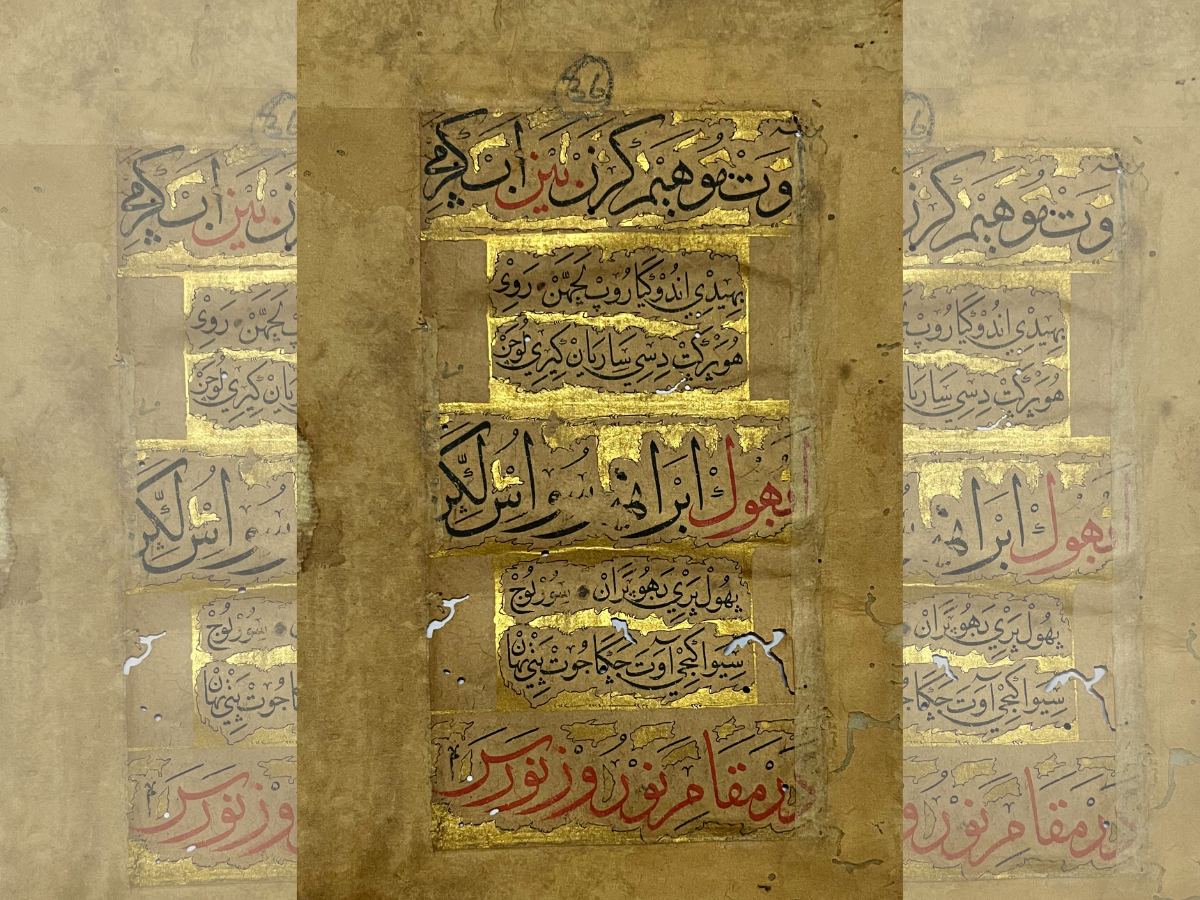 On the second floor of Hyderabad’s Salar Jung Museum lies an extensive library. Despite its sizeable collection of manuscripts and books spread across multiple rooms, it remains largely unknown to the museum’s many visitors.

Among the many rare manuscripts housed at the Salar Jung Library, which include texts in Arabic, Persian, Urdu, Sanskrit, and other languages, are dozens of literary works in Dakhni. Along with Persian, Dakhni was a major literary language of the Deccan Sultanates, the kingdoms that ruled the area surrounding today’s Hyderabad from the fourteenth to the late seventeenth century.

Those who recognize the name Dakhni may know it as a language spoken in Hyderabad and its surroundings today. Sometimes called Dakhni Urdu, Hyderabadi, or even Hyderabadi Hindi, modern Dakhni resembles standard Urdu but is distinguished by the use of distinct words and phrases, some of which are borrowed from neighbouring languages like Marathi.

Today, some call it a dialect (or even an accent), while others call it an independent language. Dakhni can be heard not only in Telangana, but across Karnataka, Maharashtra, and even Tamil Nadu in regional varieties. Spoken primarily(though not exclusively)by Muslims, Dakhni unites speakers across the boundaries of modern language states.

Rather than being confined to a single state’s political borders, the language is used across the Deccan region: the plateau extending across what is today south-central India. Throughout its history, this region in India has been characterized by linguistic and cultural diversity.Literature in Marathi and Telugu thrived alongside Arabic, Persian, and Sanskrit.

Influx into to the Deccan

The influx of people from the Arabian Peninsula, Iran, East Africa, and Europe brought new commodities, goods, and ideas to the region. The Deccan’s history as a connected space has meant that much has been shared across social groups—from forms of dress and gift-giving conventions to practices of astrology and divination.

It was in this context that premodern Dakhni—related to yet distinct from the modern language—began to take shape in the fourteenth century. It happened when North Indian Muslims migrated to the Deccan following the Delhi Sultanate’s conquests, under Muhammad bin Tughluq, in southern India and establishment of a new capital in Daulatabad.

These migrants spoke a form of early Hindi-Urdu—which did not comprise two distinct languages until the eighteenth century—called Hindawi or Dihlawi. Initially employed by writers belonging to the Chishti and Qadiri Sufi orders, Dakhni soon became the language of choice for writing lyric poems, verse narratives, and other literary works at the courts of the Deccan Sultanates.

The earliest known verse narrative in Dakhni—untitled but later named the Masnavi Kadam Rao Padam Rao—dates to the early fifteenth century, when the Bahmani kingdom ruled over large parts of the Deccan. Over the next two centuries, after the founding of the Nizam Shahi, Adil Shahi, and Qutb Shahi Sultanates (in Ahmednagar, Bijapur, and Golconda respectively), Dakhni became a major literary language at the courts.

From the language’s inception, many Dakhni writers engaged with themes and literary forms drawn from the Indian environment. The Masnavi Kadam Rao Padam Rao, for example, centres entirely on non-Muslim characters: the king Kadam Rao, his two ministers, and a yogi. At the end of the sixteenth century, Ibrahim Adil Shah II, the ruler of the Bijapur Sultanate, composed a book of songs titled Kitab-iNauras.

In addition to writing songs on the topics of Hindu deities and the visualization of ragas (Indian musical modes), he composed them in the literary form of the pada, which was used across India for musical compositions at the time.

Muhammad Quli Qutb Shah, Hyderabad’s founder and a Golconda king, incorporated themes such as monsoon lovesickness while writing in the Persian poetic form of the ghazal. And the authors of Dakhni romances such as Pem Nemand Gulshan-iIshq drew on Sufi themes while also setting their poems within an Indian geography and landscape.

Incorporation of Indian and Iranian elements

Recently, art historians like Deborah Hutton have drawn attention to the incorporation of both Indian and Iranian elements in the architectural monuments across the erstwhile Deccan Sultanates. In classical Dakhni literature, we see something rather similar: the incorporation of a diverse set of literary models drawn from Hindawi and Sanskrit, as well as Persian and Arabic.

In forging a literary language, Dakhni authors drew inspiration from a wide set of sources, creating something very new.

But while Dakhni writers incorporated Indian images and themes, they also relied heavily on Persian models. From the inception of the Bahmani Sultanate in the fourteenth century, Iranian scholars and administrators played an essential role in the kingdoms. By the sixteenth and seventeenth centuries, after the use of Dakhani became widespread, the role of Persian did not diminish.

Role of Persian as an official and administrative language

Not only was Persian used as the primary language of administration across the Sultanates (a role never allotted to Dakhni), but the kings of Bijapur and Golconda continued to fund Persian compositions along with those in Dakhni. Historically, scholars have often drawn attention to competing social groups in the Deccan Sultanates.

These included the Afaqis (newcomers from Iran) and the Dakhnis (individuals whose families had been in the Deccan for generations or East Africans initially brought to the region as slaves). But more recently, historians like Subah Dayal have shown that there was considerable fluidity between the two groups, which did not always map onto the Persian and Dakhni languages.

Several writers—such as Wajhi, who was employed by the Qutb Shahis—wrote in both languages. Even those who wrote exclusively in Dakhni were well-versed in Persian literary conventions. Most Dakhni texts were written in Persian genres and according to Persian meters, and many translations were produced from Persian into Dakhni.

Patrons and poets recognized that Dakhni, unlike Persian, would not be intelligible to a broader, Persian-literate readership outside of South Asia. However, Dakhni writers did forge connections with writers and readers outside of the Deccan. Some authors called the language in which they wrote Gujri, Hindawi, or even Hindi,creating a link between their texts and literary traditions from Gujarat or North India.

Dakhni thus possessed a status somewhere in between Persian and the regional languages of Kannada, Marathi, and Telugu. These associations with Persian did not mean that premodern Dakhni writers did not emphasize place. As early as the fifteenth century, the author of the Masnavi Kadam Rao Padam Rao situated himself and his patron in the Deccan.

Throughout the varied history of Dakhni literature, authors had far-reaching aspirations for their works, yet also drew a close connection between the language and the region, and these priorities were not contradictory. The historical traces of this literary past provide a view into the demarcation of spaces along different linguistic lines, which extend beyond the geographies of our modern imaginations.

(Zoë Woodbury High is a PhD Candidate in the Department of South Asian Languages and Cultures at the University of Chicago. Her research focuses on literary, cultural, and religious interactions at the Bijapur court under Ibrahim Adil Shah II. She currently lives in Hyderabad.)