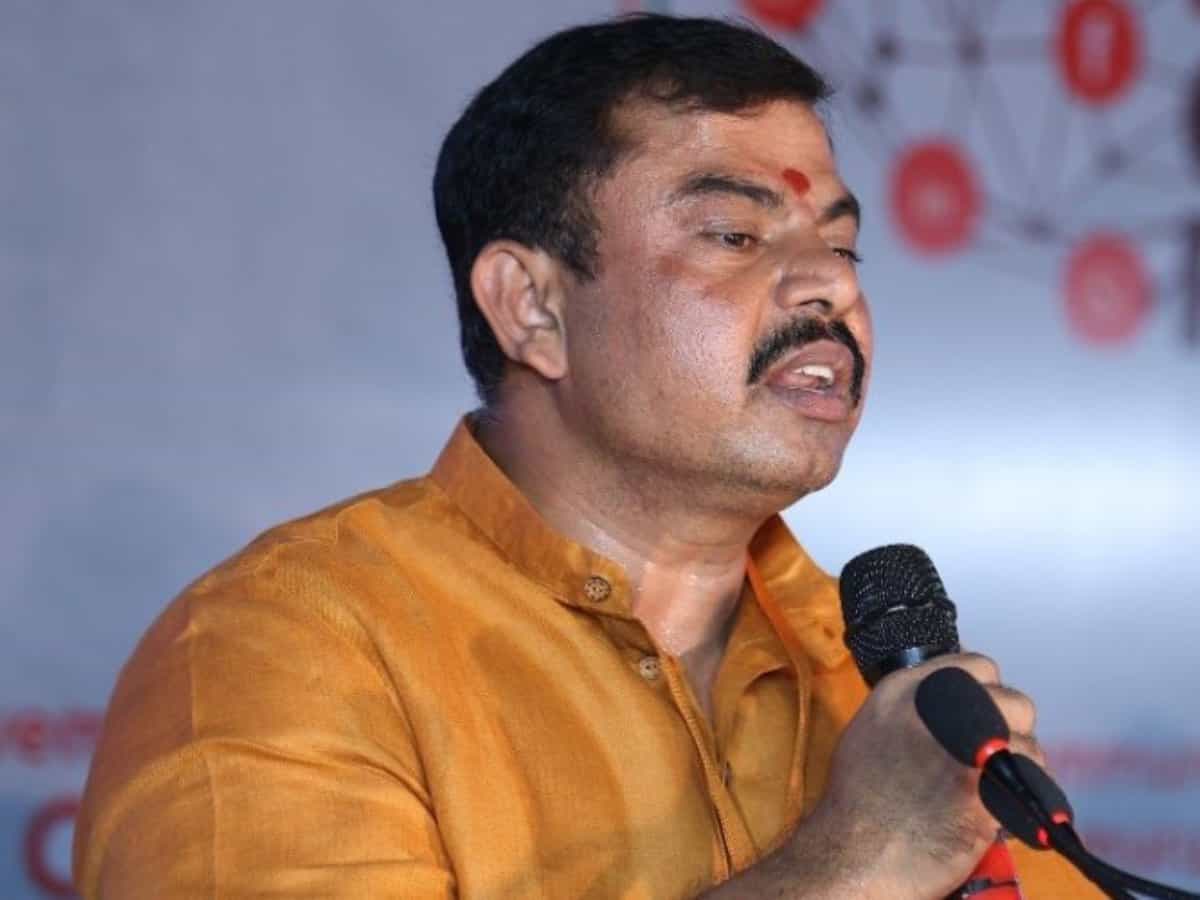 Hyderabad: Suspended BJP MLA Raja Singh from Goshamahal constituency was arrested for the second time. Singh was arrested under the Preventive Detention Act (PD Act) for his derogatory comments against Muslims and the Prophet Muhammad in a Youtube video.

The city police on Thursday arrested T Raja Singh three days after multiple cases were filed against him, especially for making remarks against Prophet Muhammad in a Youtube video leading to massive protests from Muslims across Hyderabad.

Post his arrest on Thursday, Raja Singh was taken to Gandhi Hospital for a medical checkup.

Where it all began

On August 11, Raja Singh threatened to stop stand-up comedian Munawar Faruqui’s show which was scheduled to be held in Hyderabad on August 20. While Faruqui was scheduled to perform in January of this year, BJP leaders alleged that the comedian had hurt the sentiments of Hindus by making jokes about Hindu gods and as such should not be allowed to perform.

On August 19, one day earlier before Munwar Farooqui’s show, Raja Singh was trying to ‘burn down the set at Shilpakala Vedika, where the comedian’s show was supposed to take place. Meanwhile, the city police took him into custody.

On August 20, on the day of the show, Raja Singh was placed under house arrest by the Hyderabad police on Friday. Amid heightened security, the Cyberabad police took into custody 20 workers of the Bhartiya Janata Party (BJP) and the Bhartiya Janata Yuva Morcha when they tried to disrupt the show of standup comedian Munawar Faruqui at Shilpakala Vedika on Saturday evening.

On 21 August, after Munawar Faruqui’s show was concluded, Raja Singh posted a Youtube video on Jai Shree Ram Channel Telangana (now made private) in which he passed several derogatory comments against Muslims and Prophet Muhammad.

At the end of the video, Raja Singh said that whatever he uttered was “comedy”.

On 22 August, Protests erupted and demanded Raja Singh’s arrest outside city police commissioner CV Anand’s office, and continued on Tuesday. The South Zone police on early Tuesday morning registered an FIR against the Goshamahal BJP MLA for his ‘blasphemous’ remarks against Prophet Muhammad.

It came after scores of people took to the streets demanding action against him. Following that, police filed an FIR under various sections of the Indian Penal Code (IPC) for hate-mongering.

On 23 August, Raja Singh was arrested by Hyderabad Police. After some hours of his arrest, he was released on bail by the Nampally Court due to lapses in police procedure.

Several shops in various markets of Hyderabad remained closed during the day. During protests that once again sparked up overnight, over 40 people were taken into police custody.

On August 24, after Raja Singh’s celebration pictures were viral on social media, protests once again erupted at several places in Hyderabad, with many demanding his arrest.

Amidst the protests, BJP suspended Raja Singh for his remarks, stating that he violated party rules. He was also asked to show cause within 10 days as to why should he not be expelled from the party.

Up till Wednesday, a total of eight cases were booked against Singh at Mangalhat, Malakpet, Nampally, Dabeerpura, Chaderghat, Amberpet, Afzalgunj, and Rajendranagar police stations.

On August 25, Raja Singh was arrested once again under the Preventative Detention (PD) Act for his remarks after several protests were held and several protesters were arrested for rioting.

“Just got the information that now or in the evening I will be arrested by the police. The chief minister has ordered the police to jail me by any means, even by digging out all the old cases. They want me to be banished or arrested by the PD act. I want to tell him that I am neither scared of bullets, hanging nor jail and I will keep fighting for the sake of Dharma. If somebody insults my God, I cannot accept it. Crores of Hindus will respond in the manner that they understand,” he said.