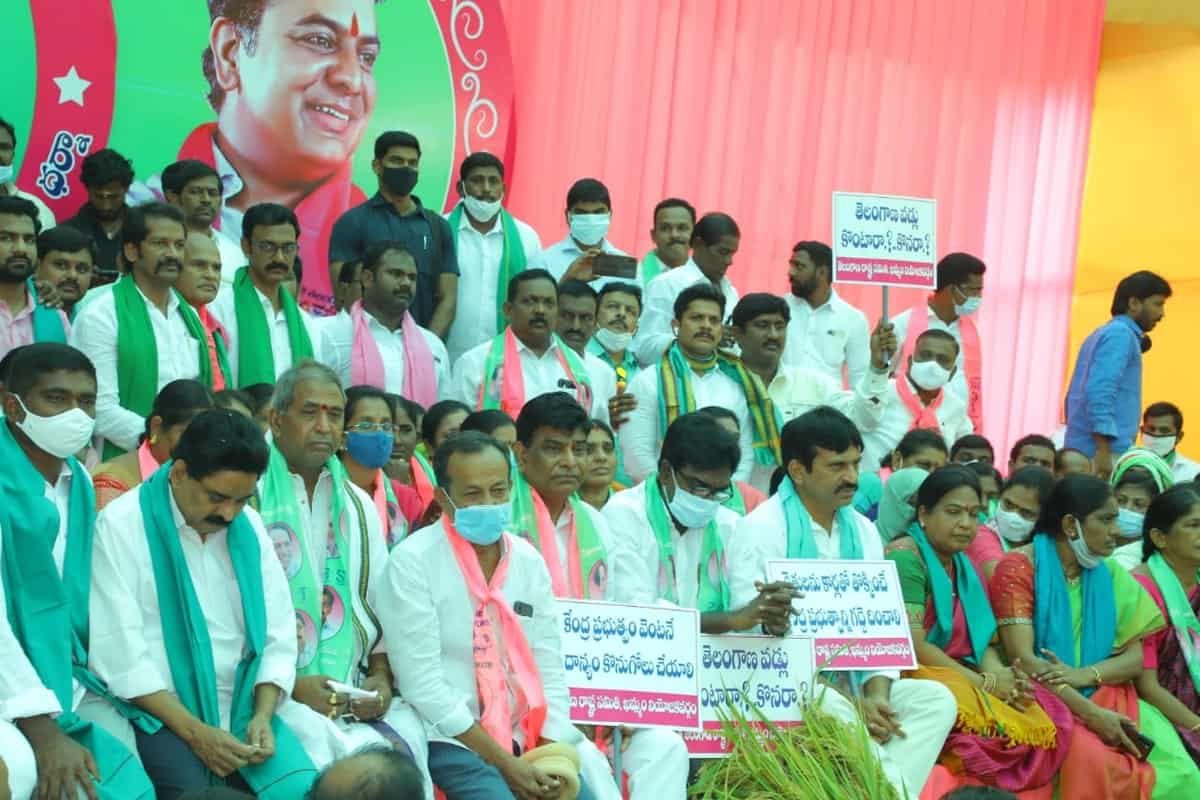 Hyderabad: Keeping up his word of opposing the Centre with regard to paddy procurement, Telangana chief minister K. Chandrasekhar Rao (KCR) and TRS supremo on Tuesday announced that all of his TRS party 100 plus MLAs, MPs and all other elected representatives, including himself, will sit on a Dharna on November 18 at Dharna Chowk near Indira Park from 11 a.m. to 2 p.m.

The Telangana Rashtra Samithi (TRS) president had earlier stated that he will protest against the Centre’s unclear policy and “double-speak” with regards to buying paddy from the farmers of the state.

“The centre is practising doublespeak in terms of buying paddy from farmers. The Food Corporation of India has agreed to buy paddy from our state but the centre is not allowing it. The responsibility of maintaining buffer stock is on the Centre and they are in control of the FCA godowns. We went as a delegation to meet the minister in Delhi and wrote numerous letters to them but in response got nothing clear. They buy paddy from Punjab but not from here which shows clear differential treatment when it comes to Telangana,” KCR said, while addressing a press conference.

“The BJP state president should apologize to farmers for misleading them into producing paddy in the Yasangi season. We have struggled a lot to protect the interest of farmers in Telangana. From unlimited power to unlimited water and Crop support in the form of Rythu Bandhu, we are doing everything. We will fight with the centre now on their behalf until they provide clarity,’’ KCR added.

Calling the BJP’s actions “anti-farmer”, KCR stated that the TRS will “win the fight” against the Centre regarding this issue and that the BJP will have to answer to people explaining its “inaction and chaos inducing drama”.

“They are hurling stones at farmers for asking questions. They rolled a car over farmers in Uttar pradesh. The state BJP chief’s actions, including going to the crop procurement centres, clearly speaks of his actions to create chaos. BJP in the centre and the state are participating in doublespeak. We asked farmers to not produce paddy clearly keeping in mind the Centre’s vague behaviour,” he added.

KCR reiterated that they will keep fighting even after the day of the Dharna until Centre gives them clear answers on the details of procurement.

“We’ll wait for 2 days for a response from the Centre after the 18th of this month. If there is no response, we will let the farmers know what crops to produce. But the fight will go on until they provide us with the clarity regarding the amount of paddy the centre is planning to buy from Telangana,” he said.