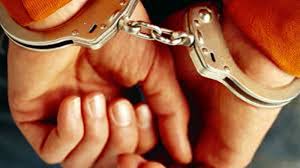 Hyderabad: The Moghalpura police have arrested two youths from old city  in connection with the assault case of a cell phone accessories shop owner.

Pappu Kumar was found moving with a girl belonging to the other community.

Pappu Kumar a native of Kushar, Bihar has been running a mobile accessories shop at Charminar for a few months. Earlier he used to run a fast food centre at Talabkatta where he got acquainted and developed a friendship with a girl belonging to a different community.

On Monday  while he was moving with the girl from Mirchowk to Moghalpura on the main road by foot, when they reached near Indian oil petrol bunk, a two wheeler rider  came from the back side and abused him and later beat him.

In the meantime a few other passersby gathered at the spot and they too assaulted him.

Tension prevailed in the area after few the locals objected the girl’s presence along with a boy from different community.

After assaulting the person fled from the scene. Pappu Kumar filed a complaint with the Moghalpura police and named a few persons Mohammed Ghouse and Mohammed Shareef (auto driver) who were allegedly involved in the attack.

The family members have alleged that though Pappu Kumar wanted to withdraw complaint, but the police have implicated them in false and fabricated case.

The Moghalpura police have registered a case under IPC section 153(A) (Promoting enmity between two communities), 341(wrongful restraint) and 323,504,506.

Later the police arrested the accused persons and sent them to judicial remand.