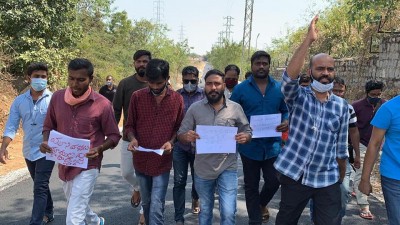 Hyderabad, Feb 5 : University of Hyderabad (UoH) teachers and students on Friday organised a walk on the campus against encroachment of varsity land.

They alleged that the land grabbers were making attempts to encroach upon the university land by demolishing the compound walls and laying roads.

An attempt was made on January 9 when a 100 feet compound wall was brought down using earth-movers.

The protestors marched from the Administration Block to the encroached land site. They raised slogans of ‘save university land’, ‘save not sale’ and ‘save university save education’ and carried placards.

Demanding that the university land be used strictly used for academic purposes and not to serve the interests of the real-estate corporates backed by the state government, the varsity community vowed to stand firmly to protect the university land and wage a united struggle.

The Telangana High Court on January 12 directed authorities to maintain status quo. It gave the interim direction on the petition filed by the UoH challenging the decision to lay an approach road through its campus.

The University sought direction to the state authorities not to interfere with the UoH’s peaceful possession of the land admeasuring 18 acres.

The site is part of the 2,324 acres allotted by the erstwhile Andhra Pradesh government in 1975 to establish the university campus.