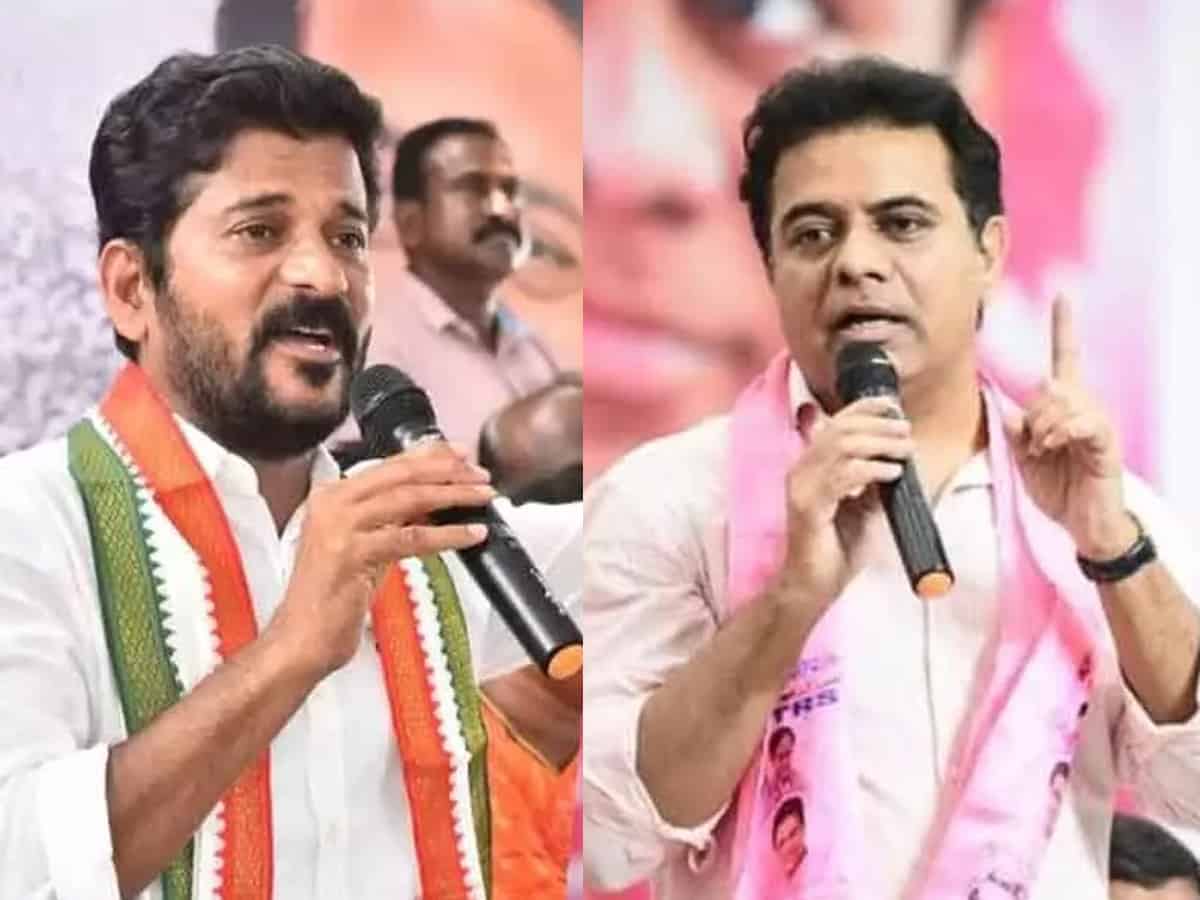 For the past few weeks, Telangana has been witnessing an interesting but bitter battle between two young politicians aspiring to rule the state in the coming years – Telangana Pradesh Congress Committee president A Revanth Reddy and Telangana Rashtra Samithi working president K T Rama Rao.

Both the leaders have been indulging in a war of words against each other, using choicest epithets. Revanth called KTR a “born liar and looter” and “a brand ambassador for cinema stars consuming drugs.”

And KTR described Revanth as: “PCC Cheap,” a “scumbag,” “a third rate criminal,” “a thug” and “an alumnus of Cherlapalli jail.”

The wordy duel culminated in KTR, who is also the state information technology minister, filing a defamation case against the PCC chief on Monday for dragging his name into the ongoing investigation by the Enforcement Directorate into the alleged drug peddling by some Telugu film stars.

KTR alleged that the PCC chief had made various “baseless, scurrilous, and manifestly false statements and allegations” against him and sought to link his name with the investigation being conducted by the Enforcement Directorate against allegations of drug and psychotropic substances abuse by certain persons.

He also sought adequate compensation to be paid for such serious and malicious acts of defamation caused by Revanth and wanted that further criminal proceedings be initiated.

The Hyderabad City Civil Court issued notices to Revanth to file a counter by October 20 and directed that the latter should not mention KTR’s name in any manner while referring to the Tollywood drugs case.

The immediate provocation for KTR’s decision to move the court was Revanth’s statement at a public meeting held at Gajwel, the constituency of TRS president and chief minister K Chandrasekhar Rao, on last Friday and a post on the twitter tagging the IT minister a couple of days ago, while launching a campaign with hashtag #WhiteChallenge against the growing drug menace in the state.

The very next day, KTR strongly condemned Revanth’s comment saying he was no way connected to the drug case involving Telugu film industry. Stating that he was ready to give his blood and hair samples for testing for drugs, he sought to know whether Rahul Gandhi too would give samples for drug testing. He even threatened to file “sedition” cases against the leaders (Revanth) who made such irresponsible allegations.

A day later, Revanth threw another challenge to KTR, asking him to come to the Telangana Martyrs’ Memorial at Gunpark in front of the state assembly for the drug test.

In response KTR tweeted: “I am ready for any test & will travel to AIIMS Delhi if Rahul Gandhi is willing to join. It’s below my dignity to do it with Cherlapally jail alumni (sic),” KTR tweeted, referring to the PCC chief’s stint in the jail in the cash-for-vote case of 2015.

The Telangana IT minister challenged Revanth whether he would tender an apology and resign from his posts, if he (KTR) takes the test and gets a clean chit. He also questioned whether the TPCC president was willing to undergo a lie detector test on the Note for Vote case.

Revanth retorted with another tweet: “Indicate time and place @KTRTRS for the lie detector test along with KCR on CBI cases on corruption charges in Sahara Provident Fund and ESI hospital construction scandals. #WhiteChallenge.”

Much before this episode, the PCC president and TRS working president were indulging in attack and counter-attack on social media. Revanth took to Twitter to take pot shots at KTR for jumping the gun to claim that the accused in the rape-and-murder of a six-year-old girl at Saidabad on September 9 was arrested within hours, while the police were still on the lookout. KTR later withdrew his claim and expressed regrets for his hasty statement.

A couple of days later, Revanth took objection to his own party MP from Kerala Shashi Tharoor showering praises on KTR for developing the IT sector in Telangana during his recent visit to Hyderabad and called the Congress MP as “gadha” (donkey).

“He who has praised the IT Minister should also know about the state of affairs here. That gadha (donkey) should have been tagged in the minister’s false tweet. If both speak to each other in English, it won’t bring any change here,” Revanth said in an informal talk with reporters.

Waiting for the opportunity to attack the PCC chief, KTR tweeted, tagging Rahul Gandhi: “As the chairman of the IT standing committee, Shashi Tharoor Ji had paid some compliments to the efforts of the Govt of Telangana recently. His colleague in parliament & PCC Cheap calls him a Donkey!! This is what happens when you have a 3rd rate criminal/thug leading the party.”

Revanth shot back: “Born liar and looter @KTRTRS can’t get away with hiding behind @ShashiTharoor ji and Fake news. It’s clear that you are trying to mislead current issues of child molestation and corruption charges against your family.”

And KTR reacted immediately. “While scumbags like Revanth Reddy need not be responded to; it’s important to expose filth. Here’s his audio clip/comments on Tharoor. Sent to me by a reporter. I am sure if we send it to a forensic lab, it’ll match his infamous ‘Note4Vote’ voice,” he said.

And the battle continues!

A Srinivasa Rao is Senior Journalist based out of Hyderabad covering developments in Andhra Pradesh and Telangana . He has over three decades of reporting experience.