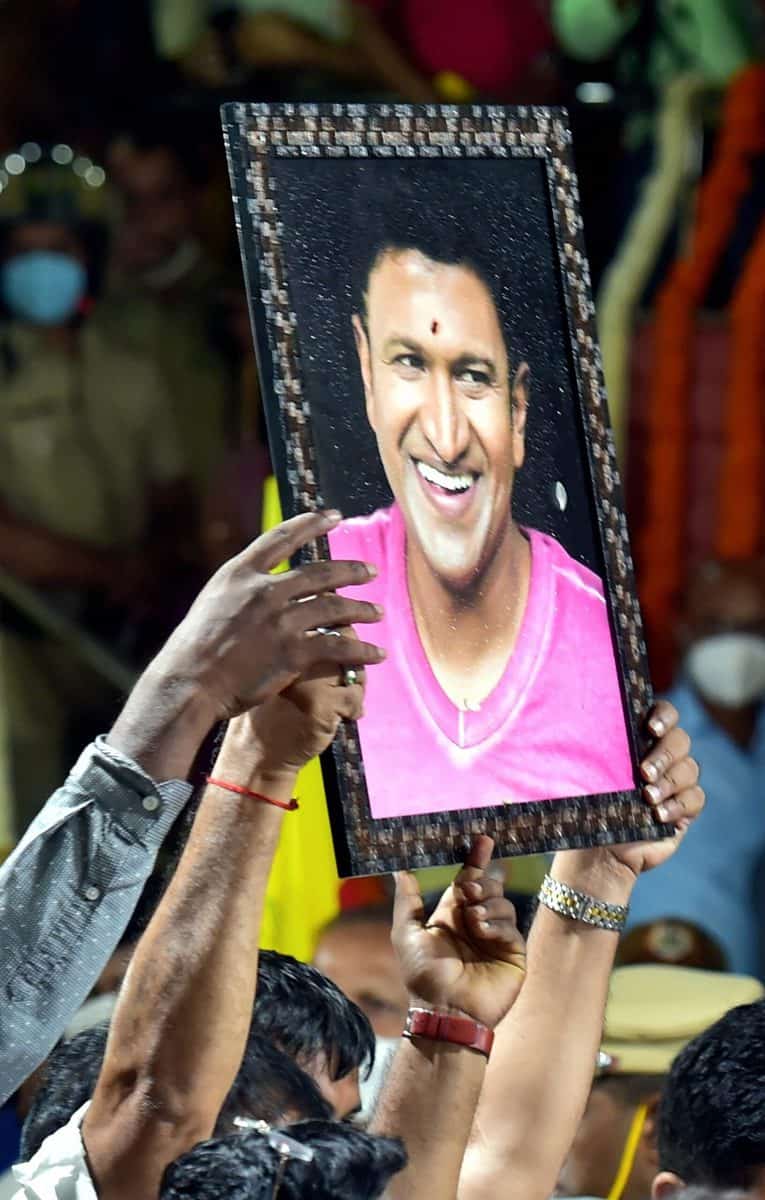 Bengaluru: Kannada film star Puneeth Rajkumar was laid to rest with full state honours on Sunday morning at the Kanteerava studio here, next to his parents.

Considered the Kannada cinema’s reigning star, Puneeth, youngest of the five children of thespian and matinee idol Dr Rajkumar, passed away at the age of 46, after suffering a cardiac arrest on Friday.

The final journey of the actor’s mortal remains began at about 5:30 AM from Kanteerava Stadium, where it was kept since Friday evening for thousands of fans and well-wishers to pay their last respects, to Kanteerava studio, the final resting place, covering a distance of about 13 km. The mortal remains reached the studio at about 6:30 AM.

Puneeth was laid to rest in the early morning hours, much ahead of the schedule of 10 am.

According to an official government release, due to security reasons, with the consent of the family members Puneeth’s last rites were performed much before the scheduled time.

Several political dignitaries including Chief Minister Basavaraj Bommai, several of his cabinet colleagues, former Chief Ministers B S Yediyurappa and Siddaramaiah, state Congress chief D K Shivakumar, host of film personalities and members of Rajkumar family, were among those who paid their last respects to the departed actor.

Bommai, who had seen Puneeth since his childhood, became emotional and was seen kissing his forehead before the last rites.

Due to security reasons and space constrains at the studio, access to last rites was restricted to select dignitaries and family members.

Puneeth was accorded full state honours, as the police band played the national anthem and police personnel fired three rounds in the air, followed by two minutes of silence as a mark of respect.

The national tri-colour that was wrapped on Puneeth’s body was then handed over to his wife Ashwini Revanth by Chief Minister Bommai.

Following the actor’s death, the state government had announced that his last rites will be conducted with state honours at Dr Rajkumar Punyabhoomi in Kanteerava Studio, next to his father and mother.

The last rites were performed according to Ediga traditions by Puneeth’s nephew and actor Raghavendra Rajkumar’s eldest son Vinay Rajkumar.

Though the final journey and last rites took place in the early morning, hundreds of his fans had gathered in front of Kanteerava studio and on the procession route to say their final good bye.

Thousands of grieving fans had flocked to the city’s Kanteerava stadium since Friday evening from different parts of the state to pay their last respects to their favourite actor.