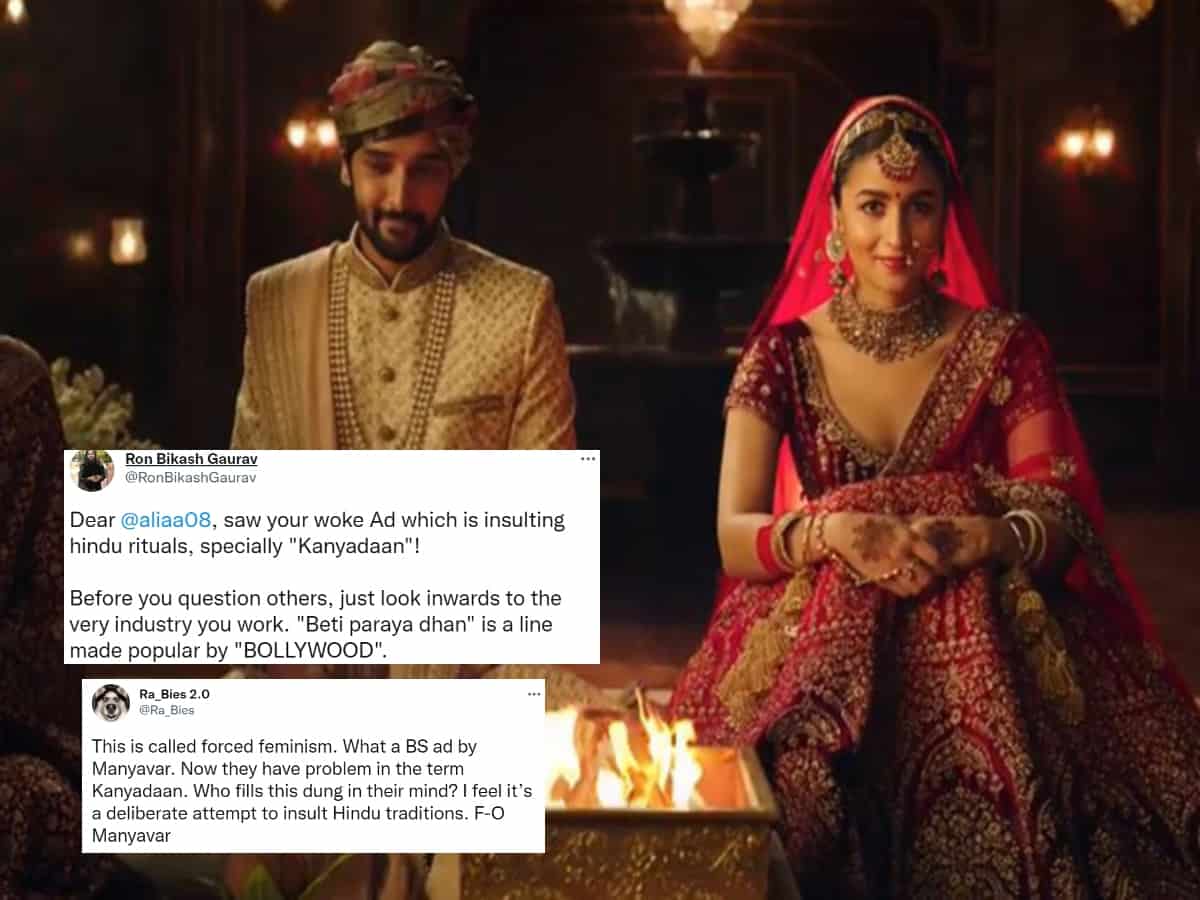 Mumbai: Clothing brand Manyavar has found itself in controversial soup over its recently released bridal advertisement featuring Alia Bhatt. In the ad, Alia questions the archaic tradition of ‘Kanyadaan’ and netizens have mixed responses to it.

The advertisement show alia in a bridal wear alongside her groom on the Mandap with both the families present. She goes on to recollect what she was always told by each member of her family respectively in an internal monologue.

In the monologue, the actress talks about how the bride’s grandmother used to speak about a time when she goes to ‘her’ house and questions if the house she is in now isn’t hers.

Alia Bhatt then goes on to question the bride’s father who looked after her like the apple of his eye and how he often was told by others that the money spent on her isn’t their own. “Am I not their own?” asked the actress. “Paraya Dhan” was the precise term used.

The bride’s mother is said to be nicknaming her as Chidhiya (a bird), much like in reality how birds fly away, post marriage a bride as well does fly away. “Parr Chidhiya ka toh poora aasmaan hota hai na? “ says Alia in the ad.

At the time of kanyadaan, she questions “Am I a thing to be donated?” and says it should be ‘kanyamaan’, and not ‘kanyadaan’.

Twitter went ballistic after the outcoming of the ad and there were a set of people who found the idea against hindu ideals. They also had a problem with how every brand criticises Hindu customs only.

Somebody even wrote “The very industry that objectifies women in their films, web series and reality shows is preaching about “kanyamaan” Wish they would practise what they preach then women would automatically get respect.”

Meanwhile, there were others too who hailed the concept of the ad as well as Alia for her portrayal of the ‘modern concept’. One of the users who backed the theme, wrote, ‘Let’s bring it down.’ Another user wrote, ‘A very strong social statement’. A third follower who hailed the concept, wrote, ‘Soo soo love the concept yaar @moheyfashion The lines are actually really touching and the lehenga is soo gorgeous Alia is looking so gorgeous in it’.

“Every girl out there will feel good after listening and watching this ad and we will try that this happens in reality too,” wrote a fan.

On the professional front Alia Bhatt will next be seen in the much awaited multilingual flick of S.S.Rajamouli, RRR: Rise Roar Revolt, playing Sita, Ram Charan Tej’s love interest.