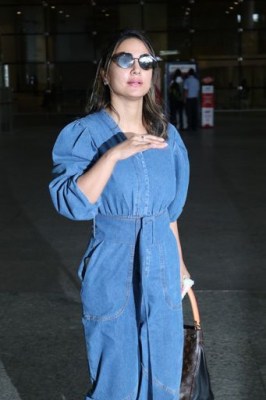 Mumbai, Dec 1 : Actress Hina Khan has shared a stunning picture with fans on social media from her vacation in Maldives.

Hina’s new Instagram post is an image that captures her sitting on a beach with a flower pinned in her hair. She completes her look with bold red lips and an olive green dress.

“Night Mode photography at its best… Thank you for the lovely dinner.. @furaveriresort,” Hina captioned the image.

The actress became a household name with her role of Akshara in the TV serial “Yeh Rishta Kya Kehlata Hai”. she then participated in the reality show “Bigg Boss 11”, and has also dabbled in music albums.

Hina made her debut in Bollywood with the film “Hacked” earlier this year, and was also seen in the film “Unlock”.

She recently starred in the supernatural show “Naagin 5”, and briefly entered the “Bigg Boss 14” house as a Toofani Senior.