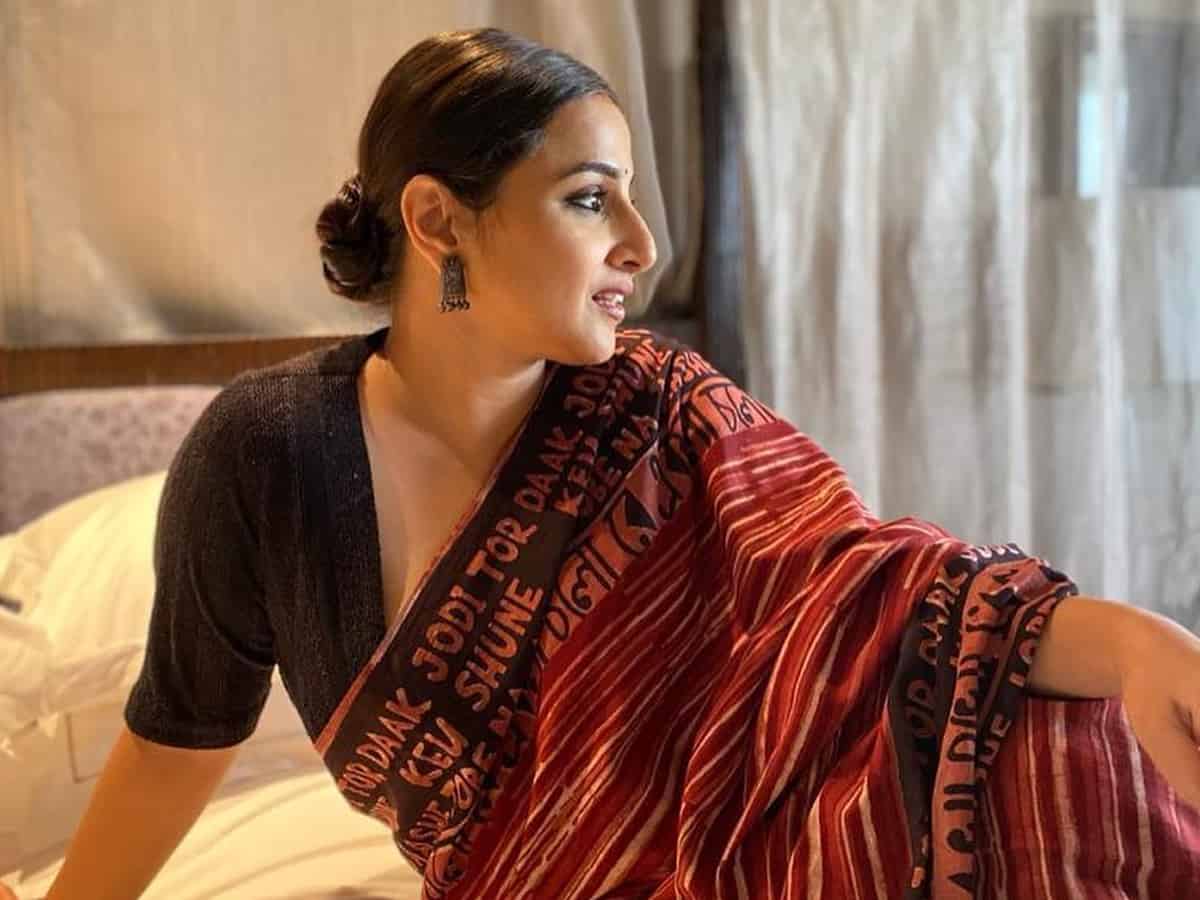 New Delhi: Giving major vintage fashion goals with a touch of fusion in her look, Vidya Balan treated fans with drop-dead gorgeous pictures of herself from a recent photoshoot on Sunday.

The National Award-winning- actor never leaves a chance to stun her fans either with her powerhouse performances or her fashion statements.

Gracing yet another saree look, the 42-year old was seen exuding elegance in a printed black and yellow shade saree with a sultry cut sleeves blouse and a chick scarf which she knotted around her perfectly tied bun.

Taking to her Instagram handle, the ‘Kahaani’ star shared a series of pictures featuring herself where she can be seen posing confidently for the lens.

In the pictures, Vidya is seen effortlessly carrying the beautiful printed saree with a light lace embodied on it. To complete the look, she accessorised her outfit with beautiful retro earrings and a ring. Skipping neckpiece, she complemented the look with a perfectly tied simple bun hairstyle and minimal makeup look.

Referring to her chick scarf retro hairstyle, she captioned the post as, “I am told I am knotty!”

Within a few minutes of being shared, fans of the star chimed into the comments section and adored her look by leaving fire and lovestruck emoticons. Her ‘Mission Mangal’ co-star Sonakshi Sinha also liked the picture.

Meanwhile, Vidya is currently being lauded for her stellar performance in Amazon Prime Video’s ‘Sherni’, wherein she essays the character of Vidya Vincent- an upright forest officer, who powers through the brutal beasts of social barriers set by the patriarchal society and the lackadaisical attitudes within her department.

A few days ago, the actor also announced her short film ‘Natkhat’ that will be coming out on July 24.

Slated to premiere on the OTT platform Voot, as part of their ‘Film Festival’, the movie brought India to the 2021 Oscar party after being highly acclaimed by international audiences.

‘Natkhat’, which takes on the delicate subject of gender equality, as shown in the teaser of the movie, premiered on YouTube as part of the ‘We Are One: A Global Film Festival’ on June 2, 2020. The Ronnie Screwvala produced film has been helmed by Shaan Vyas, who also co-wrote it with Annukampa Harsh.

It will stream more than 15 critically acclaimed movies over eight days from July 24.