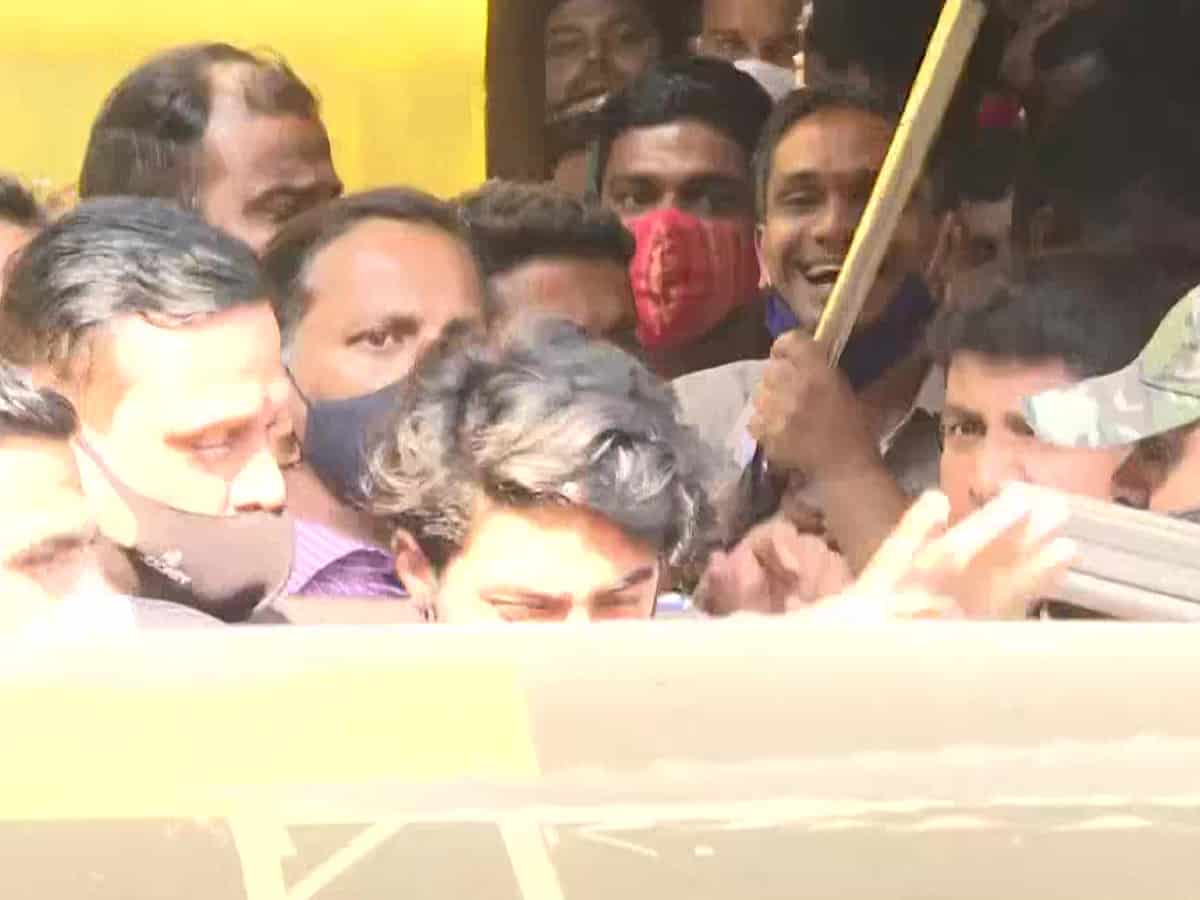 Mumbai: Aryan Shahrukh Khan had spent another night in prison yesterday as his bail formalities could not be completed on time.

Aryan Khan along with two others Munmun Dhamecha and Arbaaz Merchant were granted bail by the Bombay High Court, yesterday.

Justice NW Sambre imposed 14 bail conditions in the operative order which was released this afternoon, including bond payment of Rs 1 lakh and a weekly visit to the NCB office here.

“We won’t give special treatment to anyone. The law is the same for all. The deadline for receiving the bail papers was 5.30 pm. That has passed. He won’t be released today,” a senior prison official informed PTI.

Khan’s lawyer left the session’s court building with a release memo at 6.37 pm.

The court, after verification, accepted the surety following which Chawla was asked to go to the court’s registry department to sign the necessary papers.

After Chawla signed the papers, they were sent back to the court for the judge to sign the surety bond and issue the release memo.

While leaving the court building, Chawla told reporters, “There is a sense of relief in the family. We are all happy it is over. Bachha that aa jayega,” she added.

The HC on Friday afternoon made available its operative order in which it imposed 14 bail conditions on Aryan Khan and his co-accused in the case, Arbaaz Merchant and Munmun Dhamecha, who were also granted bail, stipulating their release on a personal bond of Rs 1 lakh each with one or two sureties of the same amount.

In the five-page order, signed by Justice N W Sambre, the high court said the trio will have to surrender their passports before the NDPS court and shall not leave India without taking permission from the special court and that they will have to attend the NCB office each Friday between 11 am and 2 pm to mark their presence.

The judge will give a detailed bail order with reasons next week.

The HC said if the trio violates any of the conditions imposed then the Narcotics Control Bureau (NCB), which is probing the cruise drugs case, shall “straightaway apply to the special judge/court for cancellation of their bail.”

“Each of the applicants/accused shall execute a personal bond of Rs 1 lakh with one or more sureties in the like amount,” the order said.

The HC said the accused shall not personally or through anyone make any attempt to influence witnesses or tamper with the evidence.

The high court directed the trio to surrender their passports before the special NDPS court and shall not leave India without taking permission from the special court. The accused should give prior intimation to the NCB before leaving Mumbai and shall provide them with their itinerary.

It added that Aryan Khan, his friend Merchant and Dhamecha, a fashion model, shall not indulge in any activity similar to the activities on the basis of which the present case stands registered against them for offences under the NDPS Act.

The HC further said the trio shall not establish any contact with any of the co-accused in the case or anyone involved in similar activities, and join the investigation as and when called by the NCB.

“Once the trial begins, the applicants/accused shall not in any manner try to delay the trial,” the court said.

While Aryan Khan and Merchant are lodged at the Arthur Road prison in central Mumbai, Dhamecha is at the Byculla women’s prison.

Aryan Khan, Merchant and Dhamecha were arrested by the NCB on October 3 and booked under relevant sections of the NDPS Act for possession, consumption, sale/purchase of banned drugs and conspiracy and abetment. Their arrest came a day after the NCB raided the cruise ship and claimed to have seized banned drugs. So far, 20 people have been arrested in the case and two of them were granted bail by the special NDPS court earlier this week.