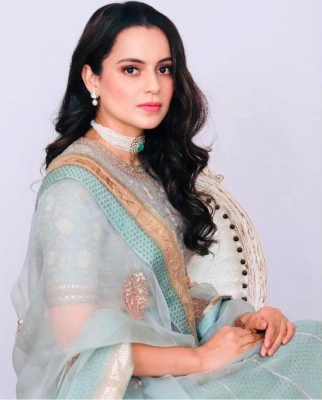 Mumbai, March 5 : Bollywood actress Kangana Ranaut on Friday shared an Ayurvedic solution for people having a high level of ‘pitta’ (bile) in the body.

Kangana shared a photo of an earthen jug on Twitter which has pieces of peach soaked in water.

“Got this earthen jug from MP, I cut few peaches and soak in water, drink this antioxidants rich water, it comes out slightly sweet and very chilled. Tastes so good, try this with cucumber and lemon as well in Ayurveda it’s hugely recommended especially for people with high pitta,” she wrote.

Reacting to the actress’ earthen jug tweet, a fan took a jibe at Taapsee Pannu.

“Tapsee needs this chilled water badly… recipe from the Bollywood queen,” wrote the fan, referring to the recent tax raid on Taapsee Pannu, along with Anurag Kashyap.

Kangana and Taapsee Pannu’s cold war has been going on for a while. Late on Thursday, Kangana took a jibe at Bollywood actress Taapsee Pannu and filmmaker Anurag Kashyap calling them “tax chor”.

Kangana reacted to a news piece that says that the I-T department has found discrepancy and manipulation in income worth Rs 650 crore after raiding their properties.

The actress tweeted: “Every minute the numbers are rising, this is only the money they found clues for, one can only imagine what could be the actual numbers of money laundering, have been exposing terrorism racket of tukde gang in the under belly of Bullydawood, these are terrorists not just #TaxChor.”

“They are not just #TaxChor huge transactions of black money has happened, did they get that money for provoking #Shaheenbagh riots or #republicdayviolence… From where the black money came and where did they send the black money which isn’t accounted for ?” Kangana asked in another tweet.