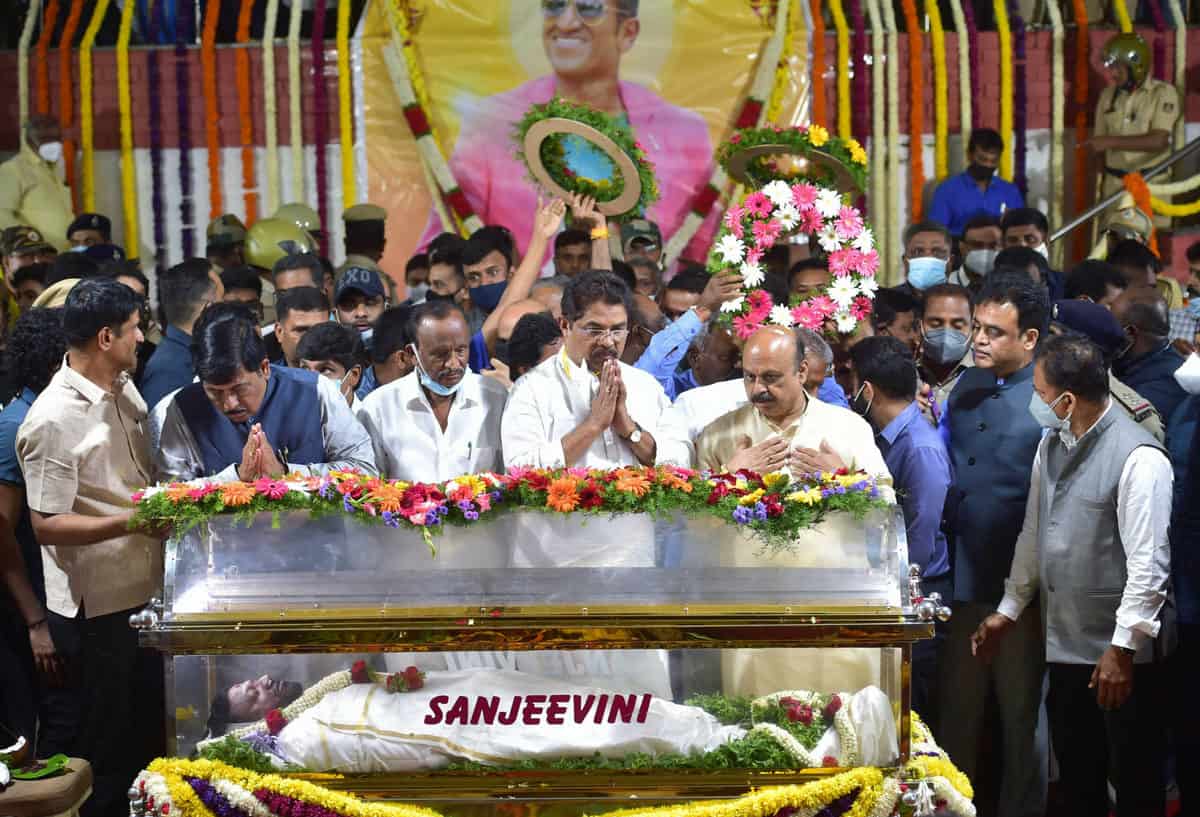 His mortal remains were brought in a procession from Kanteerava Stadium, which began around 5 a.m. and reached Kanteerava studio. Fans gathered on ether sides of roads on the way bid him tearful adieu. As many as 10 lakh people paid their last homage to young superstar.

Before the burial, the government of Karnataka accorded him honours according to protocol. Chief Minister Basavaraj Bommai handed over the Tricolour flag, which draped the mortal remains of the actor to his wife Ashwini and two daughters.

Opposition leaders D.K. Shivakumar, Siddaramaiah and all cabinet ministers, all bigwigs of the Kannada film industry attended the function held early in the morning on Sunday.

Family members performed worship of Puneeth’s mortal remains, which was placed in the decorated palanquin before the burial.

Public ‘darshan’ was allowed throughout the night for the fans to facilitate the final viewing as huge crowds continued to turn out since Friday late in the noon.

Prabhudeva and Sharath Kumar from Tamil film industry came to pay their last respects. Prime Minister Narendra Modi and Congress leader Rahul Gandhi tweeted their condolence messages over the untimely death of Puneeth. Prime Minister Modi had put up a picture of Puneeth’s family with him in his message.

Puneeth had pledged his eyes for donation. Dr Bhujanga Shetty, Director Narayana Nethralaya, who collected the eyes of Puneeth remembered the commitment of the family as he promptly received a call from Puneet’s elder brother Raghavendra Rajkumar to collect eyes for donation.

Puneeth Rajkumar had donated Rs 50 lakh to government of Karnataka during the Covid crisis. Puneeth was supporting 16 old age homes and 19 goshalas. Thousands of girl students were supported through ‘Shakthidhama’ organisation. But, never ever Puneeth spoke about his philanthropic activities. Puneeth was one of the earliest persons to get the Covid jab, when vaccination hesitancy was still there among people.

He made his debut as a full-fledged hero with ‘Appu’ movie in 2002. Since then, he had acted in 29 movies. His latest release was ‘Yuvaratnaa’ which hit the theatres in April earlier this year. His last movie is ‘James’. His documentary made by film maker Amoghavarsha of ‘Wild Karnataka’ fame shot underwater was all set to release on November 1.

He won two state awards for best actor and five Film Fare awards. He started production House Puneeth Rajkumar Films in 2019 and produced movies of Danish Sait and others. He was a successful television presenter for Kannada version of ‘Kaun Banega Karodpathi’.

Puneeth, fondly called as ‘Appu’ was christened as ‘Power star’ by fans. Puneeth made it a point to spend one whole month with his family. He used to sing and dance on the special occasions of his family. The film industry which bounced back after Covid lockdown has suddenly come under a pall of gloom with the demise of one of its superstars.